Scheduled for 13-16th September, the GC32 Orezza Corsica Cup will take place in Calvi on the northwest corner of Corsica. The town is a favourite tourist destination, especially with French holiday-makers and is most picturesque, featuring a medieval citadel, complete with cobbled streets and sizable cathedral, perched at the end of the promontory at the western end of its bay. In the shadow of the citadel is the town’s 550 berth Port Xavier Colonna, the marina where the fleet of GC32 foiling catamarans will be based during the GC32 Orezza Corsica Cup.

Importantly Calvi is also richly steeped in maritime history. It is allegedly the birthplace of Christophe Columbus and is also where Britain’s most famous naval officer, Lord Nelson, lost his eye. More recently Calvi has hosted grand prix for the ORMA 60 trimaran class and famously was a stopover on the 2000 Tour de France à la Voile, which was won by the British Barlo Plastics team.

The 2000 Tour de France was run by Manfred Ramspacher, now CEO of Paris-based Sirius Events. Ramspacher is looking forward to returning to Corsica: “When I was organising the Tour de France the arrival into Calvi in 2000 was superb and I’ve long wanted to repeat that. Calvi is both one of the most beautiful and charming places in Corsica, nestled between the mountains and the sea, and it has a first-class sailing area, that is both protected and windy. I think Corsica really deserves a world class sailing event to showcase all it can offer to sailors and tourists alike.

“Alongside Marseilles, which was one of the first GC32 events and has been the grand finale of the European circuit for four years, the announcement of this new French event will further popularise the GC32 Racing Tour in France and hopefully will help to create some new French teams.”

The new Corsican event will run into Marseille One Design, taking place over 12-15th October, once again with the support of Ville de Marseille, which this year holds the prestigious position of ‘European Capital of Sport’. 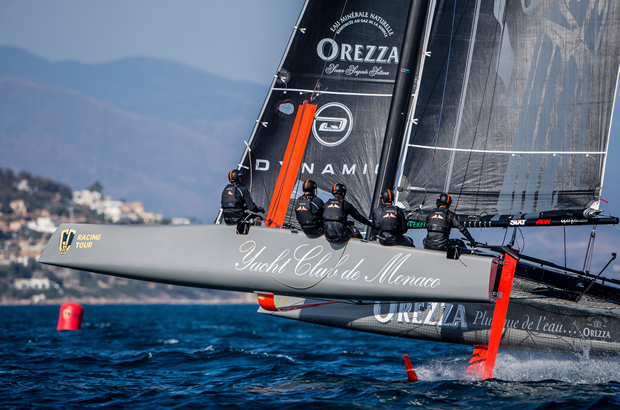 The GC32 Orezza Corsica Cup is taking place thanks to the support of title sponsor, Orezza. A naturally gaseous mineral water, Orezza, comes from a spring in the heart of one of the most beautiful regions of Corsica, the Castagniccia, in the forest of the Regional Natural Park. Being one of the world’s most ferruginous waters it has been used since ancient times as a cure for anaemia, disorders of the nervous system and malaria. Its virtues have been recognised by the l’Académie de Médecine de Paris since 1856.

Now relieved of its iron used natural processes, the water is balanced and stable in its mineral composition. Easily digested thanks to its bubbles and bicarbonate, it benefits from being one the waters with the lowest salt and is therefore very thirst-quenching; It is also devoid of nitrates.

The natural mineral water of Orezza experienced a renaissance thanks to François-Xavier Mora who, more than 15 years ago, realised a childhood dream by returning to his native Corsica with his industrial know-how to revive the source of Orezza.

Marie-Laurence Mora, President of Eaux Minérales d’Orezza, commented: “The GC32 event in Calvi is wonderful news for Corsica and we are very happy to make this possible. Orezza is known for containing minerals taken from the heart of the Castagniccia mountains and with properties perfect for sports so it is natural to celebrate their exceptional benefits. Now present on all the biggest tables, Orezza wishes to be integral to the international dynamic of the GC32 Racing Tour, which brings together the world’s best crews on boats that are impressively powerful. The waters off Calvi will demonstrate their beauty and there is no doubt that the images of these flying boats will be exhibited across the four corners of the globe along with our island, of which we are so proud.”

Ange Santini, Mayor of Calvi welcomed the flying GC32 catamarans to his town: “Through the news of this major event, the town of Calvi is renewing its nautical traditions. The quality of its waters and the organization of its in-port services will ensure that all is as it should be for the GC32 Racing Tour and its crews. These flying boats, which lie at the forefront of technology, promise an exceptional spectacle and some great sports moments on the Bay of Calvi.”

Following today’s announcement and that last week of Villasimius in southeastern Sardinia, the schedule for the GC32 Racing Tour for 2017 is now complete. The circuit for the one design foiling catamarans, that is aimed both at both pro and experienced owner-driver teams, will visit five venues this season with two in Italy followed by the Mediterranean’s leading multi-class regatta, Copa del Rey MAPFRE and then culminating in the French events in Calvi and Marseille.

GC32 Racing Tour Manager Christian Scherrer concluded: “ “With Calvi we are happy to announce the final oustanding venue for the 2017 GC32 Racing Tour . This venue in the north of Corsica is a wonderful addition to our roster of venues for 2017. We are looking forward to good sailing on the Bay of Calvi. I would like to thank Sirius Events / Manfred Ramspacher and Orezza / Madame Mora for their support for this event. ”