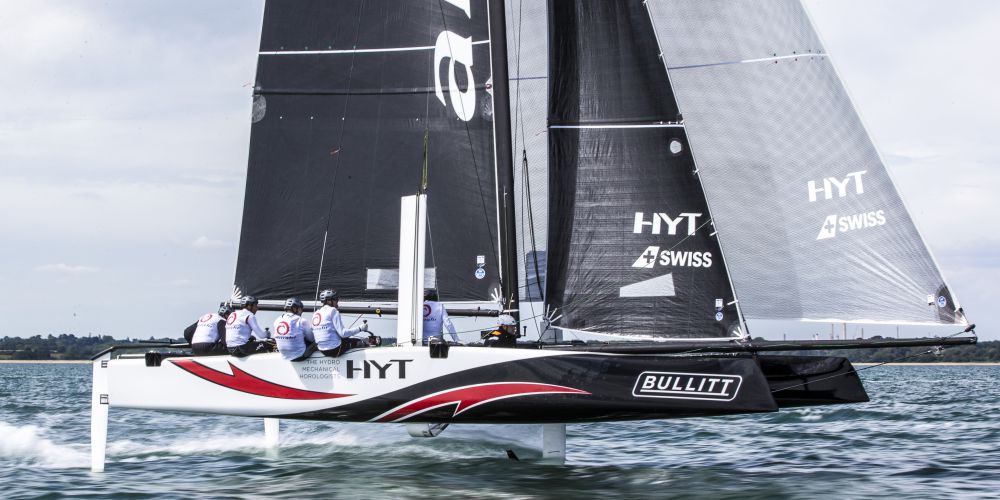 Cowes and the Solent turned on their maximum appeal for the opening day of the Bullitt GC32 Racing Tour’s Cowes Cup with brilliant sunshine and eventually enough wind to get the GC32 catamarans fully foiling.

With the course set up in the Western Solent to the north of Newtown Creek, the day proved initially tricky; the south-southwesterly wind light and in the same direction as the flood tide. This made the upwind legs challenging even for the speedy state of the art catamarans. It was quickly apparent that playing the mainland shore was necessary to steer clear of the tide that at times reached three knots.

As the day wore on, the sea breeze built to 12-13 knots, allowing the GC32s to fully foil on the downwind legs, at times hitting speed of 24 knots.

Surprisingly given the boats are still so new to their crews, the racing was competitive and after five races, four of the five teams had each won a race. At the close of play, after six races, both Sultanate of Oman and ARMIN STROM Sailing Team had won two races, however it was the ever consistent Alinghi, with Team Principal Ernesto Bertarelli at helm, that was leading overall. But it is close with ARMIN STROM just a point behind chased by Sultanate of Oman and ENGIE a further two points back.

“I think today’s conditions were great with about-to-foil or full foiling conditions – I hope we have the same tomorrow or more,” said ARMIN STROM Sailing Team skipper Flavio Marazzi, pleased after a disappointing result in Austria last month. “Today we had a few good starts, but it was about getting the shifts and the trim right, straight away, to go faster downwind or upwind.” 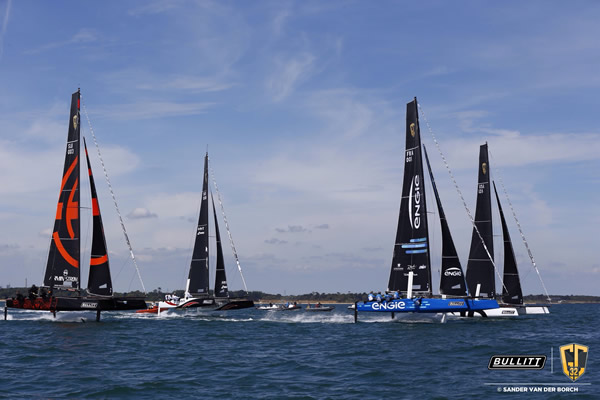 Wearing his GC32 Class President hat, Marazzi added: “Everybody is so close together and every race counts – you’re really good even if you are last! Slightly better focus and you can win it. It is nice that we are on top of each other and that there is not one team winning all the races.”

Sultanate of Oman had an up and down day results-wise. “We had some good battles in the first couple of races and one great foiling race and then a few where our starts let us down, which cost us in the last two races,” said skipper Leigh McMillan, fresh from his Extreme Sailing Series victory in Cardiff at the weekend. “There was a lot of overtaking in the first few races. But then in the last few races there was lots of defending the right shore and people going over layline, which made it difficult to find a way around.”

Sebastien Rogues’ ENGIE had a slow start to the day but improved, winning race five. Returning to the team for this event is their tactician, former America’s Cup helmsman Sebastien Col: “Racing in the Solent is always tricky with the current. The current compressed the fleet heading up to the weather mark and then it extended again on the way back. Other than that it was all about making a good start and a good first gybe. Generally it was a good first day – we had two races with bad starts, but then we upped our game. But we have so many areas to improve – gybing – I think no teams are gybing properly. Sometimes we get it right – but we don’t know why!”

Making his debut on the Bullitt GC32 Racing Tour, Jason Carroll, owner of Team ARGO, who has brought his boat and team across from the USA, was pleased with his day. “I was impressed that we managed to hang in there with the teams in a couple of the races. They have done more of this style of racing than we have. We were making more mistakes than the other teams and each time it costs you five or six boat lengths.  We struggled in the second half of the day, so hopefully we’ll have some video from the coach and some ideas for what we can change and do better tomorrow.”

Racing tomorrow starts at 1100 BST (1000 UTC) with a further six races scheduled. Friday is the last day of inshore racing before the five GC32s compete in the JPMorgan Asset Management Round the Island Race on Saturday.