Alinghi claims Friday’s singleton race at the GC32 Mar Menor Cup A tricky day with a weather front located off Spain’s Costa Calida meant that despite the best efforts of the race committee, only one race could be held on day two of the GC32 Mar Menor Cup before the wind became too unstable and the foiling catamaran teams were sent back to the Club Náutico […] 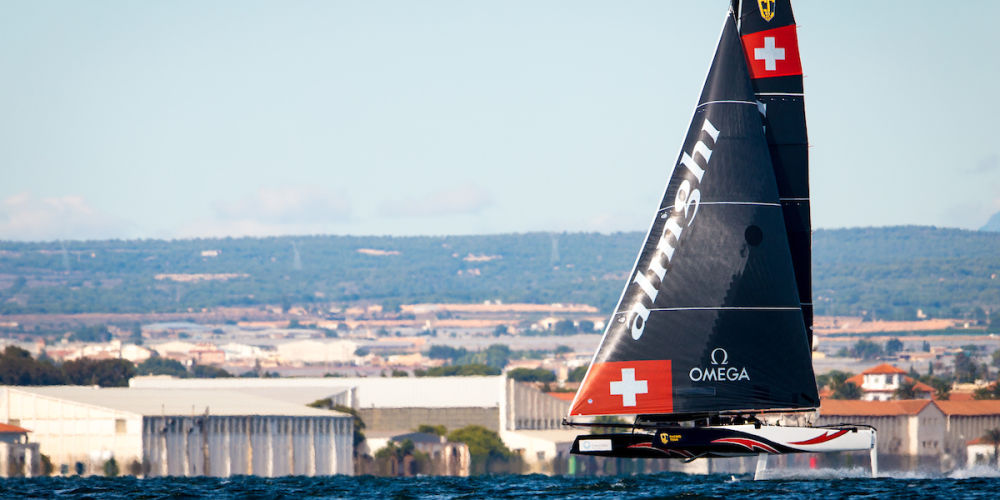 A tricky day with a weather front located off Spain’s Costa Calida meant that despite the best efforts of the race committee, only one race could be held on day two of the GC32 Mar Menor Cup before the wind became too unstable and the foiling catamaran teams were sent back to the Club Náutico Lo Pagán. 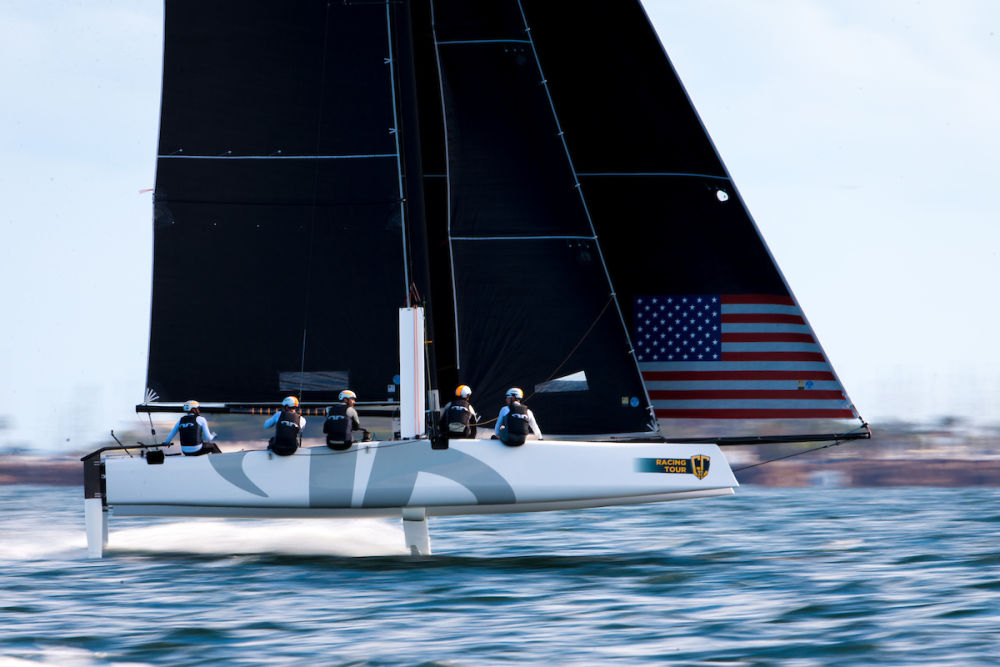 With sub-10 knots out on Murcia’s unique semi-landlocked sea, the race committee set up for windward starts. A big left shift before the start resulted in the whole fleet heading off on port tack towards the right, seaward side of the race course. It was then a case of waiting for the shift to come back returning the fleet to the centre of the course. Leading out to the right, Alinghi tacked back short of the layline, while Erik Maris and Zoulou went the whole way out to the starboard layline and ended up leading the Swiss team around the top mark. Alinghi and Zoulou split gybes down the run with Alinghi finding the best shift to lead through the leeward gate.

By the second and final downwind, Alinghi’s lead appeared unassailable until they fell into a hole out on the left side of the course, enabling Zoulou to come back into them. However the Swiss two time America’s Cup winners covered Maris’ GC32 to win by just two boatlengths. 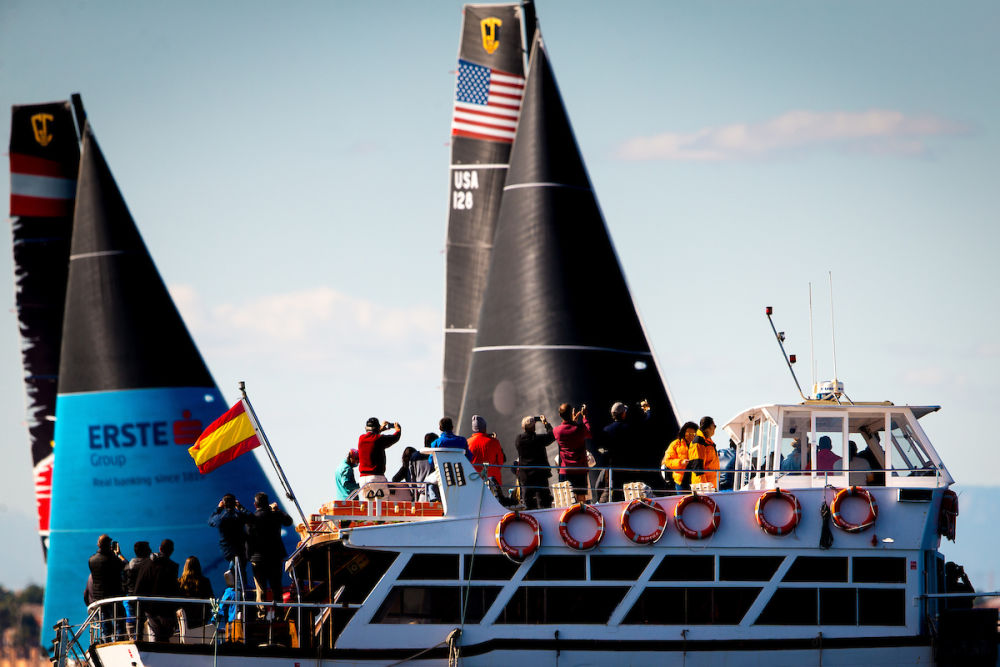 “We got the best from the day,” said Alinghi’s helmsman Arnaud Psarofaghis. “It was really shifty conditions, but we managed to have a good start on the right and extend our lead. Nico [Charbonnier, Alinghi’s tactician] made some really good calls. But it is a struggle, when you are ahead and it’s unstable, because the other boats can see where not to go. But we were not stressed as you can’t be everywhere. We were just making our boat go fast and trying to place ourselves between them [Zoulou] and the next mark. We just managed to win the race but it’s still a point…”

Erik Maris was pleased with the Zoulou team’s performance. “The race was very interesting – it was a hard battle with big wind shifts. The race committee waited and tried many times, but in vain because there just wasn’t the wind to launch a second one. That was a pity because the setting and the environment is very fine. I hope we can do more tomorrow.” 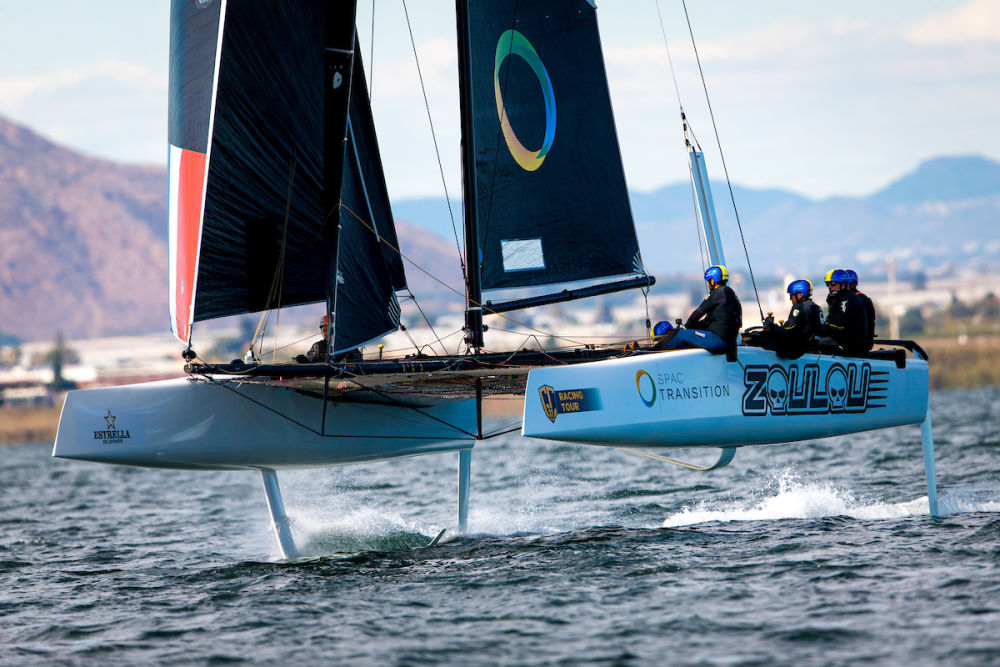 Of the Mar Menor, which the GC32 Racing Tour is visiting for a first time, Maris is a fan having trained here before. “I think it is a place we should come back to. The flat water is fantastic. We just need to find the right wind. It is a good place for our kind of [foiling ]boat.”

In the Zoulou coach boat for this event is Quentin Delapierre, France’s representative in the mixed Nacra 17 catamaran at the Tokyo Olympic Games earlier this year and who recently was appointed skipper of the French SailGP team. He had the opportunity to steer the Zoulou GC32 in training earlier this week. Despite it not having the 50 knot potential of the F50, he became an immediate fan of the smaller, simpler foiling GC32. “The boat is really insane, really reliable and with good speed downwind. I was really keen to come and sail with the Zoulou guys who have been doing so well. 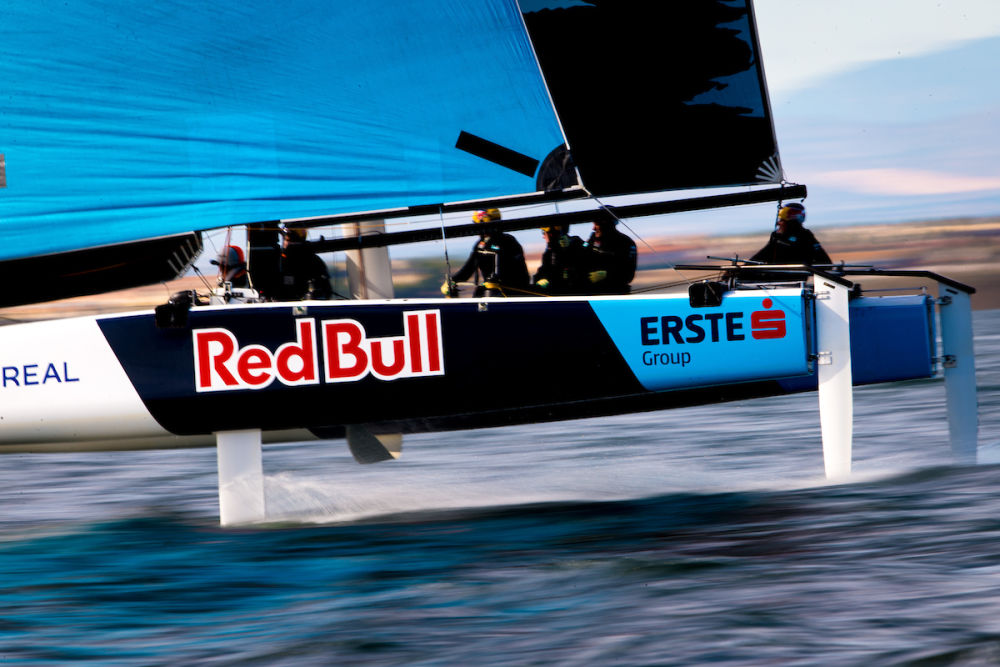 “Upwind and reaching starts – it’s a good mix,” Delapierre continued of the GC32 Racing Tour. “And the fleet is really good also with Alinghi and Black Star and Red Bull Sailing Team, the World Champions. I hope we [the French SailGP team] can find some funding to race one next season.”

Tomorrow Saturday is looking windier and the race committee is starting earlier to ensure racing coincides with the best of the breeze.

The GC32 Mar Menor Cup is being supported and hosted over the next four days by the Club Náutico Lo Pagán with the support of Turismo Region Murcia, Autoridad Portuaria de Cartagena and local municipalities San Pedro del Pinatar, Cartagena, San Javier and Los Alcázares.