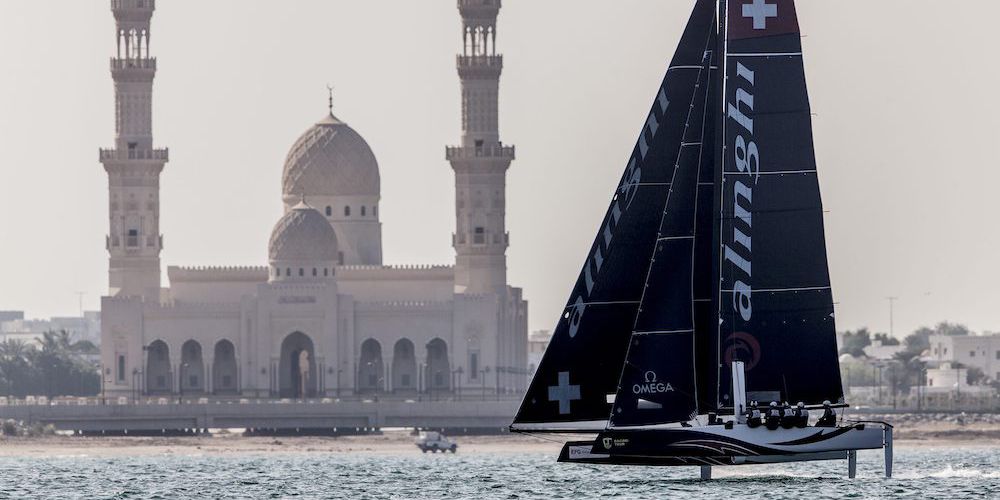 With a light forecast, the opening day of the GC32 Oman Cup looked like it might be marginal. However in the end four out of five of the scheduled races were sailed just north of the Al Mouj marina with a challenging set of wind conditions at times enabling the GC32s to fly fully, sometimes to hull fly only and at other times leaving the ultra-high performance catamarans with both hulls firmly ‘low-‘riding in displacement mode.

Whatever with the wind was doing, the only consistency on the water was Alinghi, where a lifetime of competing in the fickle winds of Lake Geneva clearly paid dividends today. In the first three races, the Swiss two time America’s Cup winners seemed in a different league, starting well (but not too well – Argo were twice called OCS) with good boat speed and able to make most sense of the breeze.

“We had a really nice opening day,” said Alinghi helmsman Arnaud Psarofaghis. “We kept it simple, sailed our own race, stayed clear of the pack and found the right spot on the favoured side. The boys did a good job to keep the boat going fast and manoeuvring nicely. It was a tricky day with big shifts and varying pressure. We just kept our calm and took our time to come back and we put some distance on the other boats. Sometimes you just need patience. Even when you’re 20m from each other, you don’t have the same wind.”

After Alinghi comfortably won the first three races, a chink in the Swiss armour finally appeared in race four which Red Bull Sailing Team won. In this a one knot increase in wind speed demonstrated how it can transform GC32 racing, with the boat fully foiling in 8-9 knots, in what would be the windiest race of the day. A fifth race was started but abandoned as the wind fell apart.

“It was a nice day, but it was light wind and that makes it difficult to make the calls, because you are limited with the manoeuvres and you have to learn every race, but that is what we did today,” said Red Bull Sailing Team’s Hans-Peter Steinacher. The Austrian catamaran specialists ended the day with a 2-1. So what made the difference? “It was definitely boat speed. Alinghi has great boat speed, but if you go the right direction boat speed is not so critical. In race three and four we went the right way and we nailed the layline. The breeze was on and off and you had to find the gusts.” 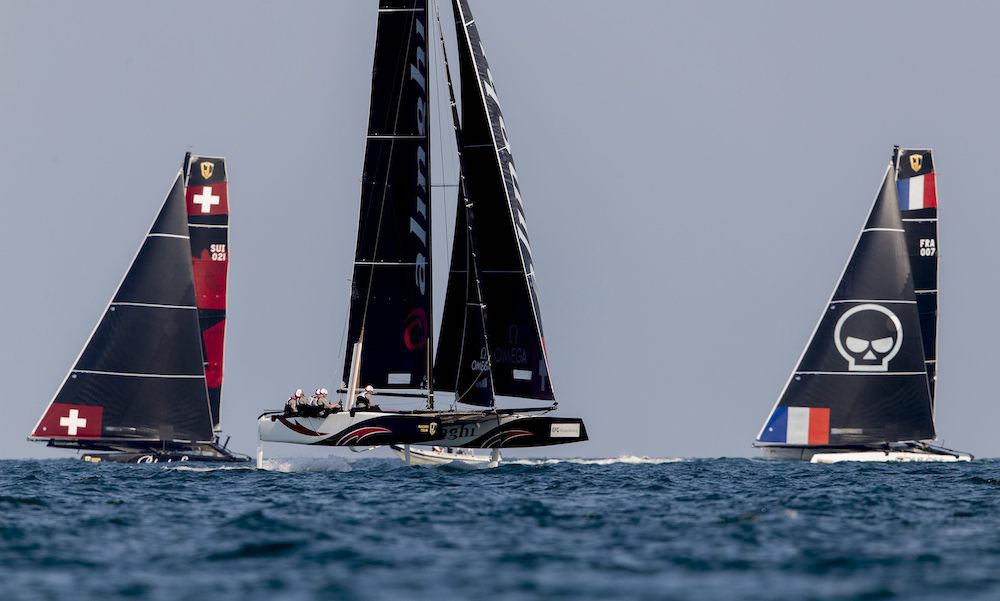 Above: Alinghi opens the GC32 Oman Cup with a three race wins of a possible four. Below: Red Bull Sailing Team broke Alinghi’s winning streak with a win in the fourth and final race on day one. Photo: Sailing Energy / GC32 Racing Tour. 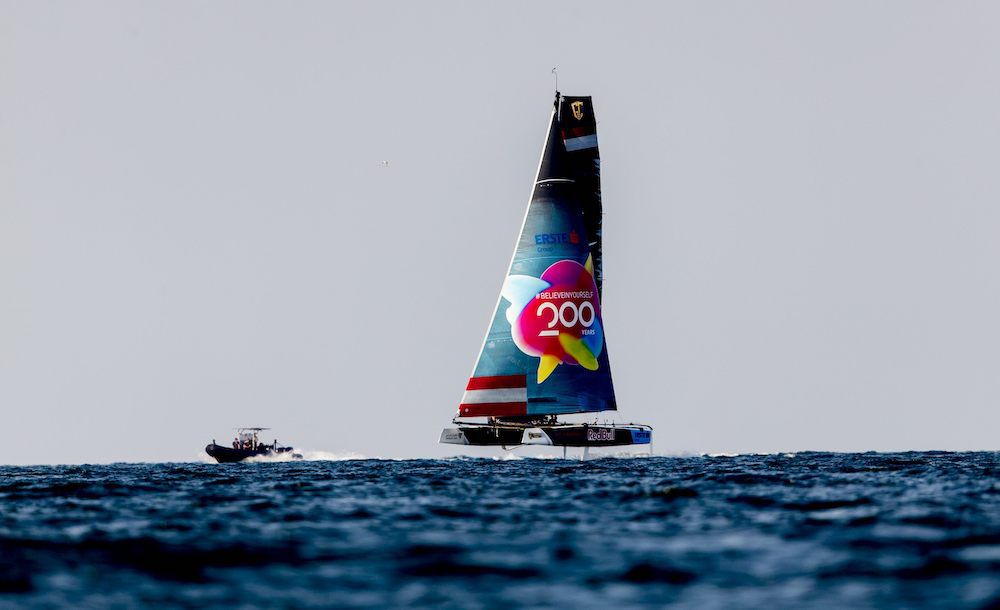 Red Bull Sailing Team ended the day third, just one point astern of Oman Air, who felt they hadn’t been dealt the best hand today – leading the final race when it was abandoned. “It has been more challenging for us. We have tried to push harder but we have three more days,” said their Omani crewman Nasser Al Mashari philosophically. “It is very tight on points [with Alinghi] and is a very hard regatta. There was less wind today, but I am so happy and proud to race here in Oman.”

Erik Maris’ Zoulou had a consistent day posting a 4-4-4-2 leaving them one point behind Red Bull Sailing Team. Showing moments of brilliance today too were Christian Zuerrer’s Black Star Sailing Team. Chris Steele is sailing his first event as the new helmsman for the Swiss team this week.

Tomorrow racing is expected to get underway at 1300 local time, the forecasts showing slightly more wind.