Patience waiting for the sea breeze paid off today, enabling four races to be held on the GC32 Racing Tour’s second day at 36 Copa del Rey MAPFRE. It was also a day when the teams prevailing had owner-drivers.

After their miserable start yesterday, GC32 Villasimius Cup winner Jason Carroll charged on to the Bay of Palma stage a reformed man. In conditions that were enough for foiling, Argo shone, managing three consecutive race wins, apparently in a league of their own. Concluding their day with a fifth, Argo’s American skipper was content: “I felt pretty low after racing yesterday. Today I feel a lot better.” 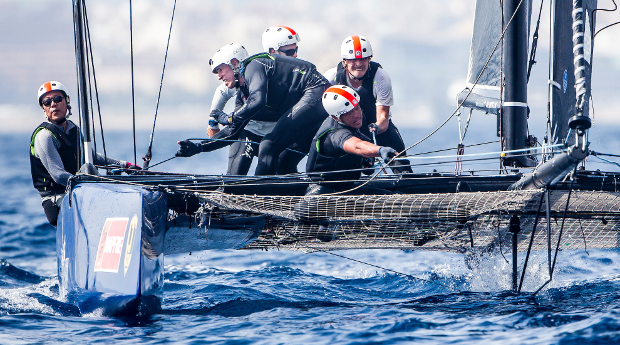 Manu Weiller, local tactician on the GC32 Racing Tour @ 36 Copa del Rey MAPFRE leader Mamma Aiuto! describes the Japanese team’s day
So what did he have for breakfast? “I did change my routine: I didn’t go for a bike ride this morning and I smoked cigars and drank rum last night – I think that was part of the secret!” Carroll mused. But if he was feeling more ‘relaxed’ he was also better prepared, no doubt assisted by Argo’s coach, Olympic medallist and former America’s Cup helm, Rod Davis. “Yesterday we felt we were on the back foot playing catch up,” continued Carroll. “I think today we had a better idea of what was going to develop on the race course – we were ready, a minute ahead, planning our routine and able to execute on our routine as well.”

This included the call that ‘left was best’, which generally it was. In all four starts today Argo won the pin end. Her performance launched Argo up the leaderboard, but nonetheless she remains second, still a massive ten points behind the leader. For an equally remarkable performance has been that of the Japanese Mamma Aiuto! team. If Argo monopolised first place today, Naofumi Kamei’s crew have similarly claimed the other podium places. In fact in six races they have only scored seconds and thirds.

“We have been consistent,” agreed tactician Manu Weiller. “We nearly had a bad result in the third race today, but managed to pass a lot of boats on the last downwind. We had good starts and our conservative tactics paid off. We’re very happy! We’re sailing well.”

While Mamma Aiuto! has a crack crew, including Federico Sampei (part of the Japanese Red Bull Youth America’s Cup team), one reason for the Japanese team’s success is Weiller, sailing in his home waters. Modestly, Weiller concedes: “I don’t need to have my eyes out of the boat all of the time. I am expecting things which do happen. But the crew is improving with every race we do too.”

But the broadest grin of the day was that of Pierre Casiraghi, who’s Malizia – Yacht Club de Monaco won the last race. “It was frustrating – we had bad starts all day, got a few penalties and were getting off the line a bit late. Then finally we got a good start and sailed a great race. We tacked before Argo, who seemed to be leading, and we caught the wind and sailed cleanly the whole way round. That helps to keep us motivated. On the scoreboard it is fun to see in the top five three are non-professional drivers.”

Throughout the day they had been suffering from race committee boat end starts. For race four they decided to join Argo at the pin, a decision which clearly paid.

After two rounds of the ANONIMO Speed Challenge there was a lengthy wait for the sea breeze to consolidate. As Casiraghi observed: “It’s really tiresome when that happens, because you lose your concentration, you get tired in the sun. But we managed to have fun. We played some music, had some beer, went for a swim. We had a DJ on board!”

Manu Weiller paid tribute to the race officials, led by PRO Bill O’Hara: “Bill was patient and waited for the good wind to come in. That was very good for all of us.”