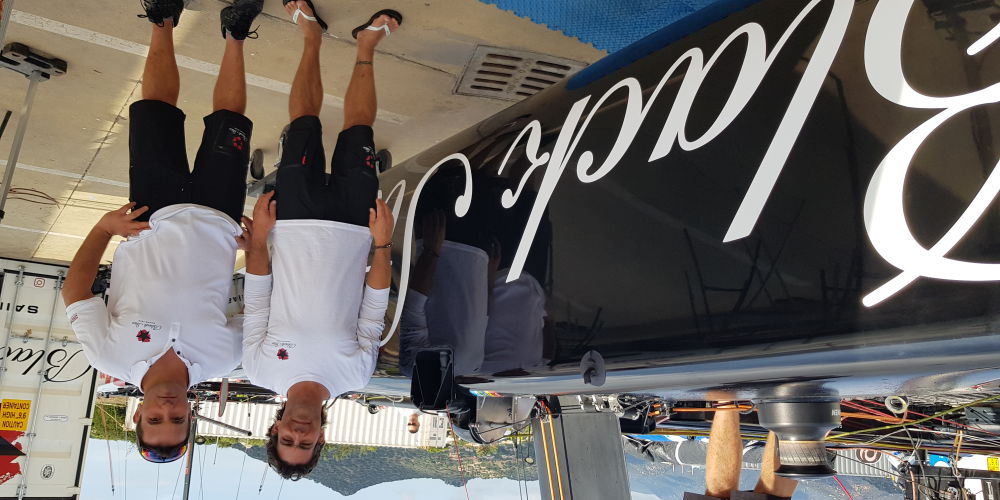 While Christian Zuerrer’s Black Star Sailing Team may herald from mountainous Switzerland, his crew has many ties to south Sardinia, home of the third ever GC32 World Championship which takes place out of Villasimius this Thursday to Sunday.

Back in 2007 when he was 14, Black Star Sailing Team’s New Zealand helmsman Chris Steele won the Optimist World Championships in nearby Cagliari. However the sailor with far deeper roots in the area (although he comes from Naples) is the team’s traveller and ‘eyes out of the boat’ man, Pierluigi de Felice, who spent three years training out of the Luna Rossa America’s Cup team’s base. Earlier this year de Felice, now 40, was part of Luna Rossa’s AC75 team that made it to the America’s Cup match in New Zealand.

A significant step in his career came while competing at the 470 Junior Worlds in New Zealand in 1999. Here he was exposed to Luna Rossa’s first America’s Cup campaign. This caused his ambition to shift from the Olympic Games to the America’s Cup.

The 2000s were halcyon days in Italian sailing. Numerous Italian teams competing in popular monohull classes such as the Mumm 30 and Farr 40; There were not one but two Italian America’s Cup campaigns in Luna Rossa and Mascalzone Latino, both with 30+ strong sailing teams, both hungry to recruit young Italian talent. De Felice sailed the 2003 and 2007 America’s Cups with Mascalzone Latino before joining Luna Rossa for their challenge aboard AC72 catamarans in San Francisco. He has remained with them ever since.

Aside from his America’s Cup sailing, de Felice enjoyed success with the Joe Fly Farr 40 team and, later, with Stig on the Melges 32 circuit. He won the Louis Vuitton Trophy in Nice in 2009 with the Italian Azzurra team. He had also twice been part of the top ranked skipper’s crew on the World Match Racing Tour and finishing runner-up with the Azzurra crew, skippered by Francesco Bruni which whom he still regularly sails.

While most Italian sailors sail with Italian racing teams, perhaps for language or cultural reasons, de Felice, along with Bruni, made the conscious decision to broaden their horizons early on. This, he says, was because he was keen to improve and the best way to do this was to look beyond Italian racing. Since then, whenever possible, he has sailed with international teams.

Perhaps for this reason, de Felice was late to multihull racing. The 34th America’s Cup was sailed in San Francisco aboard flying AC72 catamarans, but from 2011, as a prelude to it, there was the America’s Cup World Series, raced in smaller non-flying one design AC45 catamarans, which was his first experience of competing on two hulls. Luna Rossa began training in anger aboard their two AC45s and with Chris Draper and Bruni on Luna Rossa Piranha, they won the America’s Cup World Series 2012-13.

Subsequently in their preparation for the 35th America’s Cup in Bermuda, Luna Rossa converted two AC45 catamarans into foilers and, with a team including former match racing and GC32 champion Adam Minoprio, launched into a major two boat test program in Cagliari. According to de Felice, this got them well ahead with their sailing, comfortable with new catamaran techniques such as foiling upwind. It was at this point that he joined so many top level Olympic and America’s Cup sailors in his passion for sailing the ultra-high performance singlehanded Moth dinghy.

Sadly this challenge stopped abruptly halfway through the cycle. To fill the void de Felice joined his former Mascalzone Latino crewmates Jes Gram-Hansen and Rasmus Køstner (now with Team Rockwool Racing) aboard the SAP Extreme Sailing Team GC32 on the Extreme Sailing Series. “With SAP we put a very strong team together and worked hard to win the 2017 season,” he recalls.

Of the GC32 itself, de Felice says today he enjoys the physicality of sailing it and the fact that it requires a crewman to trim the foils manually. Having sailed foiling catamarans and AC75s in the America’s Cup he says he would prefer the GC32 if it had an upgraded foil package that might allow it to foil upwind like more modern flying catamarans and provide the opportunity for teams to dispense with the genniker (as they already are at times). 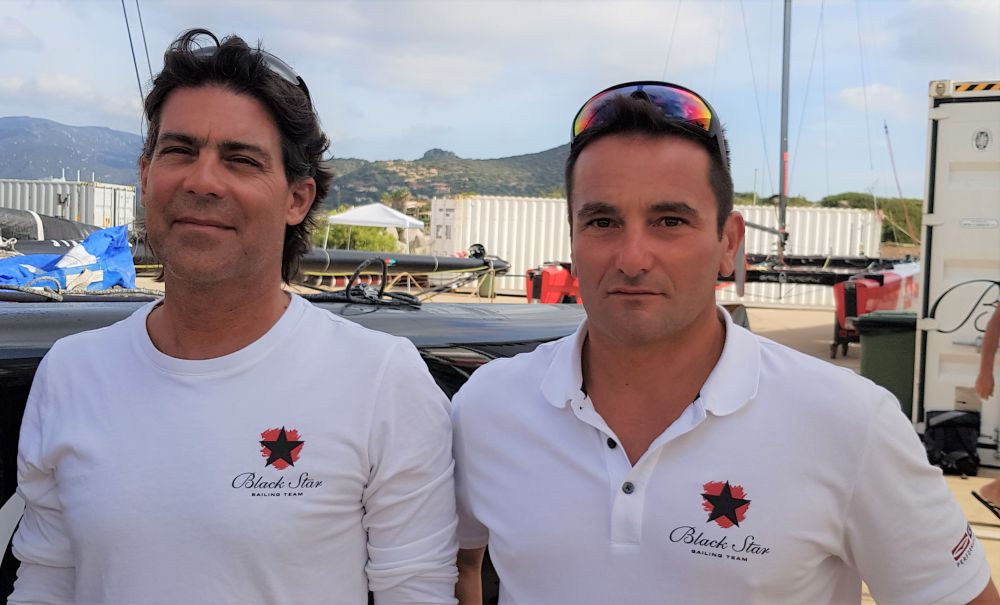 With the team’s owner Christian Zuerrer on mainsheet, Chris Steele helming, also in the crew are long term Kiwi multihull sailor Stuart Dodson (who was with Luna Rossa last winter in Auckland) as their trimmer and Britain’s Will Alloway on bow. The team has formed a tight, cohesive unit.

“Christian’s vision is to win, so from the start of the season we had a goal, although there have been challenges on the way. We are always open minded about our weaknesses. We do things like post-events reports and trying all the time to improve and look at the next step ahead. That is why we have come here [Villasimius] earlier…”

For the GC32 World Championship, to support their coach and former GC32 class President Flavio Marazzi, they have brought in Jacopo Plazzi, part of the Luna Rossa coaching team in Auckland. As on that occasion, so here, Black Star Sailing Team will be examining performance data, combined with onboard and drone video footage and audio from on board to help them progress.

They were also one of the first teams to start training in Villasimius last week, to pick up from where they left off at the last GC32 Racing Tour event in Lagos. That event Alinghi won, but by only two points and it was Black Star Sailing Team that put in the better results on the final days, finishing the event with six bullets to Alinghi’s three.

Looking forward to this week’s Worlds, de Felice says they use to come to Villasimius for weekends to go swimming, although on board the AC75 sailing at speed out of Cagliari it didn’t take long to reach Villasimius’ Cabo Carbonara and the magnificent bay to its west – this week’s GC32 battleground. Having spent so long training out of Cagliari, he probably has a better feel for the local conditions than most. “You are on the southest side of Sardinia, so you can get a little bit of anything. There are two sea breeze directions and we can get some southwesterly which might shake things up even if the weekend looks pretty light.”

The favourite for this third GC32 World Championship is the defending champion Alinghi. De Felice says of the Swiss: “As a sailing team they are locked in as they have done some much sailing together. They trust each other a lot. They have been refining their communication in manoeuvres, etc.”

He adds that there are a lot of other good teams capable of winning races this year – the 2018 World Champions on Team Tilt, Roman Hagara and Hans-Peter Steinacher on Red Bull Sailing Team, while newcomers to the GC32 Racing Tour this season – Team Rockwool Racing – is strongly on the ascent, partly using the GC32 as a training vehicle for SailGP.

As to Black Star Sailing Team de Felice admits they are still ‘green’ on the GC32 Racing Tour. Zuerrer only joined the foiling catamaran circuit in 2019. The next year was cancelled due to the pandemic, so 2021 is only the Swiss team’s second full season in the class. “We see ourselves as the underdog really. Alinghi is the legacy of the class and we are just getting our things together and trying to improve all the time.”

This week the challenge will be on for teams to ‘put a series together’ and maintain a consistent performance if they are to become GC32 World Champion and claim one of the most coveted titles in the foiling catamaran world. 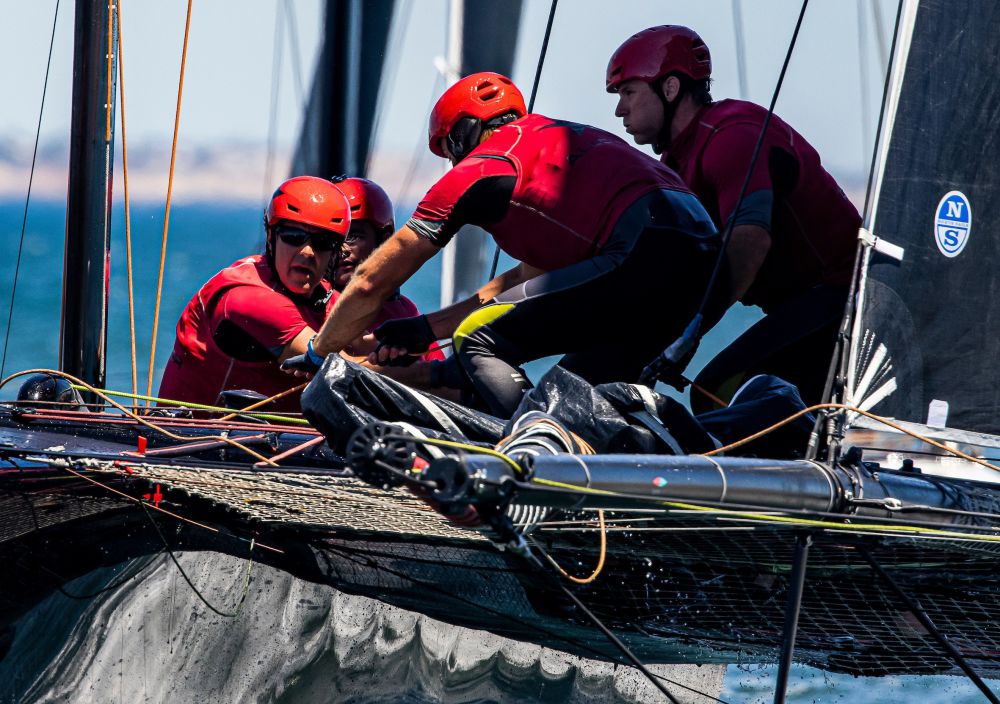