With one race lost yesterday, six were held on the final day of the GC32 Lagos Cup, event two of the 2018 GC32 Racing Tour. This saw the full schedule of 20 races completed, but two races short of this Franck Cammas and his NORAUTO powered by Team France already had the regatta sewn up.

Over the last four days, Cammas, who last year skippered his French team in the America’s Cup and whose giant sailing CV includes wins in the Volvo Ocean Race, Solitaire du Figaro, Route du Rhum, ORMA 60 Championship, C-Class and many others, showed similar form to when he won the GC32 Racing Tour in 2016. Across the eight boat fleet competing off Portugal’s Algarve, Cammas never finished a race lower than fifth and today claimed his seventh bullet of the series. NORAUTO ended the GC32 Lagos Cup 17 points ahead of Erik Maris’ second placed Zoulou.

“We avoided bad races, which was good because there were many races and we were happy we had good pace across all of the conditions,” explained Cammas. “We were consistent in our manoeuvres and starting, without taking too much risk. But the fleet is getting closer and everyone is improving. It is a good fight, which we appreciate a lot.” 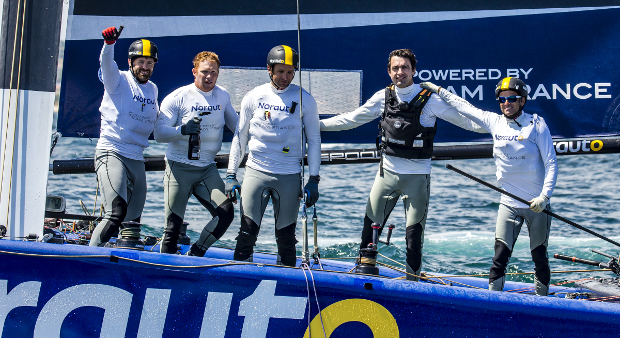 Compared to when he last raced in the GC32 Racing Tour in 2016, Cammas said: “The fleet is a lot better now. There are more boats that can win races and the fight is better.”

However Simon Hull’s Frank Racing was boat of day. The Kiwi team, which includes many of the America’s Cup winning nation’s youngest and most talented sailors, managed to win the first two races and followed this with a 2-4-4-3.

“The crew just continued bashing away and doing fantastic turns and we put ourselves in better positions and got lucky a couple of times as well no doubt,” explained a very proud Hull. “The conditions were fairly steady, although later on they were quite puffy. We got a couple of good starts which enabled us to control our lanes. The quality of the fleet has astounded me. It is so close – you drop off the foils once and three boats go past you, which makes for superb sailing. And Lagos – what a great place! I hope we will come back.”

Frank Racing was also winner of this week’s ANONIMO Speed Challenge. Their average speed of 25.26 knots (across the two reaching legs with the gybe in between), recorded on day one, was the highest of all teams this week. For this Hull was presented with an Anonimo Nautilo GC32 Racing Tour edition timepiece at this afternoon’s prizegiving.

Frank Racing’s performance today also caused them to push American Jason Carroll’s Argo from the top of the Owner-Driver leaderboard, albeit by just four points after 20 races. However the Owner-Driver competition this week would certainly have been won by Zoulou, had Erik Maris been able to race on the first day. The French team has performed exceptionally here and today alone scored two bullets, leaving them comfortably second overall. 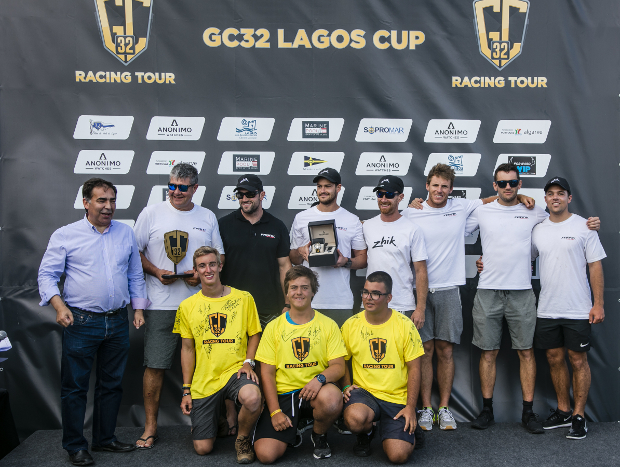 For newcomer to the class, Sir Ben Ainslie and his INEOS TEAM UK a frustrating few days learning what for them is a new boat on a new race circuit, ended on a high, when they won the final race.

In all but one race today Ainslie attempted hair raising port tack starts. These involved shaving transoms and on a couple of occasions the anchor chain of the race committee boat. “All day the right hand side of the course was strong so we were pushing hard to get that port tack start,” Ainslie explained. “A couple of times it didn’t quite work, but for the last start it finally paid and we slung shot out to the right and that got us into the lead.” They managed to hang on despite some cavitation problems with one of their foils – a teething problem with their newly-acquired boat.

Not only did the British team win the last race, but they also managed to displace the Jérôme Clerc-skippered Realteam from the bottom step of the GC32 Lagos Cup podium.

“It has been a really fun event,” said Ainslie. “The GC32 is a great class. They have done a really nice job at this event. Here in Lagos we have had really good conditions – a mix of strong winds, waves, some lighter airs, so it has been a good challenge for all the teams and a great standard of racing. We couldn’t have asked for any more in terms of the class of boat and the competition.”

The GC32 Lagos Cup was the first occasion the GC32 Racing Tour has visited Portugal and took place with the generous support of the city of Lagos, Sopromar, Marina de Lagos and Turismo do Algarve.

The flying catamaran circuit now moves on to its third event, Copa del Rey MAPFRE in Palma de Majorca over 31 July to 4 August. 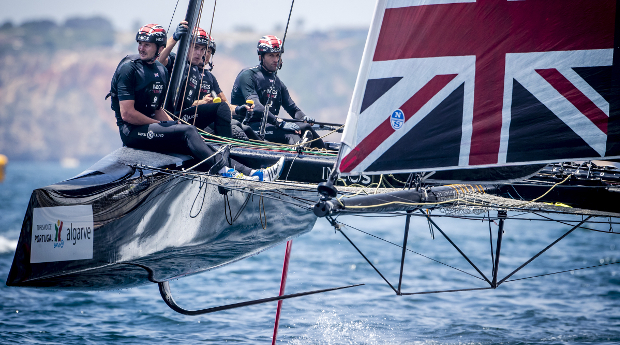