Friday 13th strikes on day two of Marseille One Design After a perfect opening day with fully flying sailing and the full schedule completed, conditions failed to repeat themselves on day two of the 2017 GC32 Racing Tour's final event

Friday 13th strikes on day two of Marseille One Design

After a perfect opening day with fully flying sailing and the full schedule completed, conditions failed to repeat themselves on Friday, the 13th – day two of GC32 Racing Tour competition at Marseille One Design. Under an overcast sky, the wind remained elusive and the one design foiling catamarans remained tied to the dock at the Marina Olympique du Roucas Blanc, recently announced as the sailing venue for the Paris 2024 Olympic Games.

“There was a lot of high level cloud which killed off any opportunity for circulation and any thermal breeze,” explained Principal Race Officer, Stuart Childerley. “There were moments when it looked promising and we saw some signs of southerly breeze offshore, but there was a big area of no wind and we had the local westerly-northwesterly on the Bay. Let’s hope for better things tomorrow.”

The skippers sympathised. Team ENGIE’s Sébastien Rogues said: “The weather hasn’t been good today. The Mediterranean Sea is a difficult place, but under these skies it is often not possible to sail. But a lot of things can happen. We will see what happens tomorrow.”

The overall leader of the GC32 Racing Tour competition at Marseille One Design remains Erik Maris’ Zoulou. Helmsman of the French GC32, Arnaud Psarofaghis, on loan from Ernesto Bertarelli’s Alinghi team, was seen eyeing up the fleet of Moth singlehanded dinghies, a class in which he is a two time past European champion. “It was frustrating today with the cloud killing off the wind,” he said. “We were hoping to go out today, but I think it will be better tomorrow so we can get in some nice racing.”

Day three of racing is scheduled to begin at 1300 tomorrow with the final day on Sunday, when the winner of both Marseille One Design and the 2017 GC32 Racing Tour overall and owner-driver prizes will be awarded, along with the winner of the ANONIMO Speed Challenge. 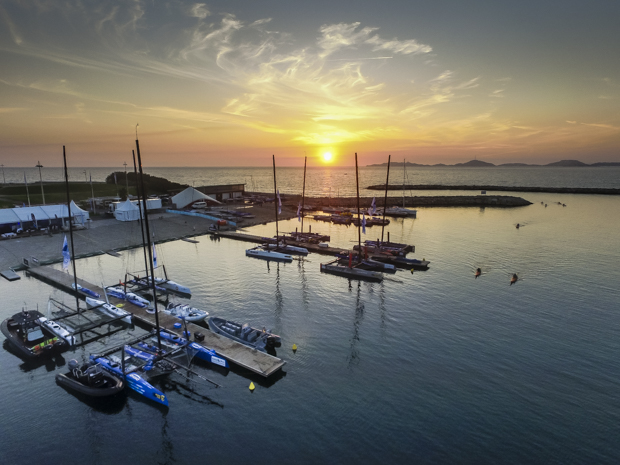