Anonimo was founded in 1997, by enthusiasts keen to maintain Florence’s watchmaking tradition. Through its ethos of innovation and technical expertise, the company developed many pioneering watches and resulting patents: for example it was one of the first watchmakers to make use of bronze, including in it diving watches. In 2013 Anonimo relocated to Switzerland, but retains its core philosophy and its strong association with adventure, team spirit and freedom.

Celebrating its 20th birthday this year, Anonimo continues to refine its style and assert its independence, combining Swiss precision with Italian chic. It now has two ranges ‘Militare’ and ‘Nautilo’.

While the first Nautilo watch was made in 2006, the latest models are a contemporary reinterpretation of the famous diving watches designed by Dino Zei. Their principle identifying mark is the crown at 4 o’clock – which is, in the opinion of many divers, is the most comfortable position for the wearer. The famous triangle, with its points at 12, 04 and 08 o’clock, appears on the facia recalling, both at day or night, on land or sea, the ‘A’ of Anonimo.

A new adventure for the GC32 Racing Tour, the Anonimo Speed Challenge will see the foiling catamarans set off from the start line on a reach, will gybe around a mark and then reach back to the finish line. According to the GC32 Racing Tour’s new Principal Race Officer, Stuart Childerley, the aim is for complete runs to take around two minutes. The runs will be timed and their average speeds recorded. To achieve top speeds, which will be above 30 knots conditions permitting, will require supreme team work on the part of the crews. The team with the fastest speed will be presented with an Anonimo Nautilo timepiece at the end of each event. 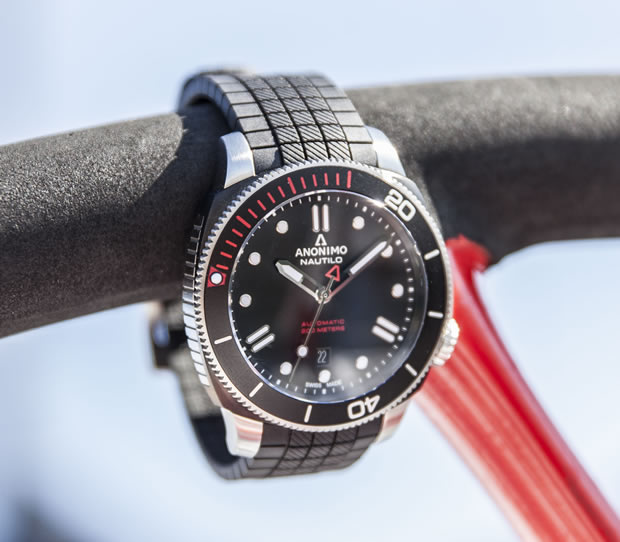