Impossibly close opening day Defying the light conditions on Lake Traunsee, four races were held on day one of the Austria Cup with three different winners in the five boat fleet.

When it looked like no racing would be possible, in fact four races were held on Lake Traunsee, Austria on the opening day of the Austria Cup, the first event on the 2015 Bullitt GC32 Racing Tour. Conditions were light, but enough to allow the one design GC32s at times to foil fully-airborne, occasionally sailing at speeds approaching three times that of the wind.

After a delay ashore in Gmunden, a westerly filled in a quarter of the way down the lake, strong enough for the race committee to get competition underway for the five GC32s. However conditions were challenging, with significant wind shifts and substantial holes in the breeze that caught out even the most experienced crews.

The stand-out performance early on was not one of the established multihull teams, but former shorthanded offshore sailor Sebastien Rogues and his crew on Team ENGIE (ex-GDF SUEZ). While he was OCS on the first start, Team ENGIE fought back into first place to win the opening race of the season. 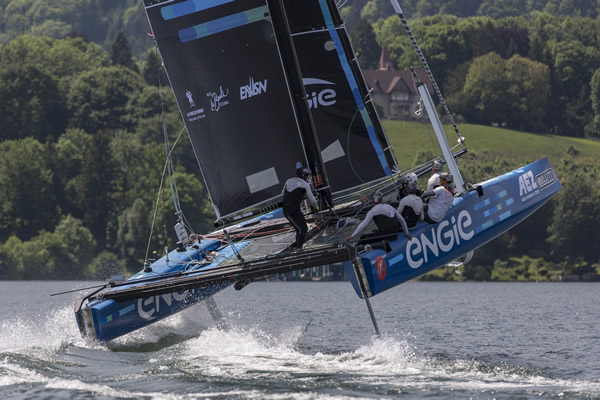 In race two it was Alinghi’s turn, scoring the day’s only start to finish win – no mean feat in the conditions. But It was not easy with Team ENGIE hounding the Swiss team around the race course.

Sultanate of Oman claimed the third bout – the third winner in as many races – a strong performance by Leigh McMillan’s team that had only had four days training prior to this their first GC32 regatta.

“It was a fantastic first day for us,” commented McMillan. “It was quite unexpected to win a race and have a really consistent day. It is nice to be on a steep learning curve and learning something every time you go out racing. Our improvement rate is pretty dramatic at the moment.” The British skipper observed that while it was a ‘snakes and ladders’ day, this was further accentuated when conditions at times allowed some boats to foil and others not. “It is dramatic the difference that makes, but it is swings and roundabouts – you have to keep finding the good bits of breeze and keep pushing hard.”

Yann Guichard and Spindrift racing led race four by an entire leg and were on track to make it four different winners in four races, until the wind disappeared altogether, forcing PRO Anne Malledant Vadre to cancel it.

As the wind re-established, the fourth race was resailed culminating in a match race for the lead between the Bertarelli siblings’ teams: Alinghi prevailed with Spindrift racing second, a small redemption for skipper Yann Guichard after their domination of race four v1. 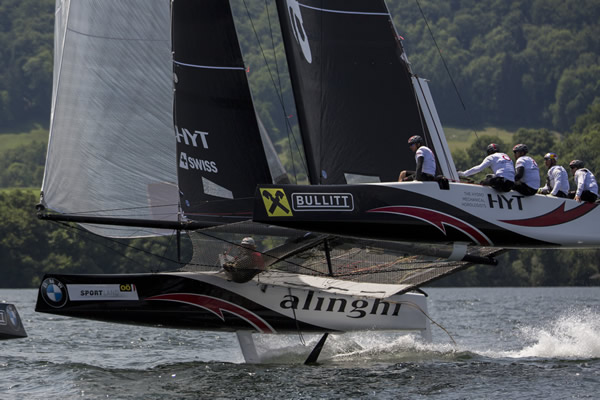 Alinghi ends this first day tied on points with Sultanate of Oman, but, with two wins, leads on countback. “It was fun to get some real serious racing in,” commented Nils Frei, trimmer on board. “It is very challenging and we are new to Traunsee with its shifty breeze. Sometimes we were foiling which is always nice in these boats, so it was a good day. It is very new for us and there are a lot of things we still have to learn.”

There was drama for the Swiss team prior to the start today when main sheet trimmer Pierre-Yves Jorand had to stand down with an injury. He was replaced on board Alinghi by Austrian two time Olympic Tornado gold medallist Hans-Peter Steinacher, now of the Red Bull Sailing Team.

“I feel proud the guys called me,” said Steinacher, who lives nearby and has sailed on Lake Traunsee since childhood. “It is nice when you normally sail against these boys and now you get to sail with them.” As to the GC32 and his debut on it, he added: “It was hard to sail it on a lake today, but the boat looks good and the competition is going up and up. It is already full-on racing.” 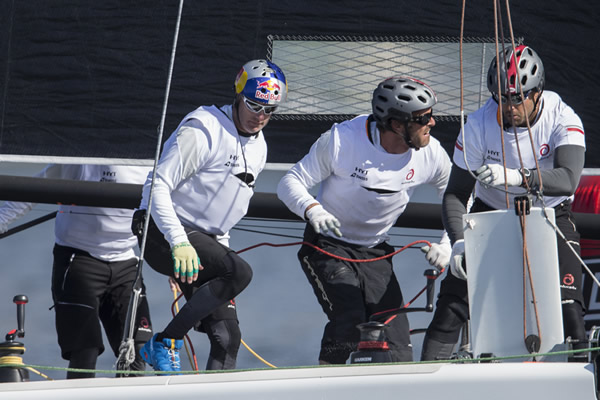 Today was the first occasion that corporate guests have been able to compete in a yacht race on board a foiling catamaran. Conditions allowed occasional foiling and this was enough to leave a marked impression on top Austrian Freeride skier, Mario Gattinger.

“It was my first time on a cat, a great experience,” said Gattinger who has taken part in some of the most extreme skiing, just as jumping off cliffs in the Himalayas and who is best known for his Freeriding films. “I have never been on a boat like this before and it was a great feeling – the sound is amazing!”

Racing at the Bullitt GC32 Austria Cup is due to kick off at 1100 tomorrow.