New look for Sebastien Rogues Following his sponsor’s change of company name and rebranding, Sébastien Rogues’ GDF SUEZ GC32 is in the process of undergoing a transformation into: ENGIE. 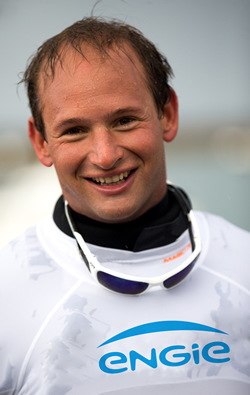 Following his sponsor’s change of company name and rebranding, Sébastien Rogues’ GDF SUEZ GC32 is in the process of undergoing a transformation into: ENGIE. The former Class40 champion’s GC32 will be ready in her new livery to compete in the first event of the Bullitt GC32 Racing Tour, the Austria Cup, taking place out of Gmunden on magnificent Lake Traunsee over 27th-31st May.

ENGIE Group has supported Sébastien Rogues since 2009, accompanying him in his rise to the highest levels of competitive sailing. This partnership is based on shared values embodied by their skipper: respect for the natural environment, commitment, drive and surpassing one’s limits.

ENGIE has been a major sports sponsor in France for over 20 years through two spheres of activity: community involvement and solidarity. The Group has been mainly active in women’s tennis, through its partnership with the French Tennis Federation and Roland-Garros, and in soccer with the legendary Paris-Saint Germain team since last year.