NORAUTO starts where she left off Lake Garda laid on the conditions for which it is world-famous on the opening day of the GC32 Malcesine Cup, the second event on the 2016 GC32 Racing Tour. From the outset Franck Cammas and his crew on NORAUTO continued where they left off in Riva del Garda.

NORAUTO starts where she left off

Lake Garda laid on the conditions for which it is world-famous on the opening day of the GC32 Malcesine Cup, the second event on the 2016 GC32 Racing Tour.

The famous ‘Ora’ southerlyovercame the overnight ‘Pelèr’ northerly mid-morning and after a short delay racing commenced off Malcesine at 1330 CET.

From the outset Franck Cammas and his crew on NORAUTO continued where they left off at the opening event of the 2016 GC32 Racing Tour in nearby Riva del Garda in May when they beat the Sébastien Schneiter-steered Team Tilt, finishing on 37 points to Team Tilt’s 50 after 19 races.

Due to a few breakdowns in the fleet and at one point the race committee boat having to up anchor (while moored in 300 metres of glacial lake) only five of the six scheduled races were sailed today. Nonetheless the ten crews came ashore elated after a day of perfect flat water foiling.

NORAUTO almost came acropper when during the first race there was a technical problem with the hook for their jib and subsequently the strop between the hook and the jib. They still hadn’t fixed this when race two started and seemed set to score a DNS. However luckily, there was a general recall and by the time it got away again, NORAUTO was ready again.

While Flavio Marazzi’s ARMIN STROM Sailing Team didn’t have the best day, two other highest-placed teams from Riva del Garda were still in contention in Sebastien Schneiter’s Team Tilt and Gunvor Racing, both of which have new helms since Riva: Arnaud Psarofaghis on the former while the latter has Italian legend Francesco Bruni.

“It was my first day steering a GC32 and we had some good moments and some difficult moments,” said Bruni. “I’m not complaining about today’s results, only that could have done even better. We had a couple of hard starts and we lost five-six points on both races. And I learned today that if you cross somebody’s wake at the wrong moment you ventilate the foil and you can nosedive. We did one today which was almost a capsize, going from 30 knots to zero in one second!”

The skill of the NORAUTO and Gunvor crews today was most evident on the tight reaching legs heading into the finish. They were the only crews that seemed able to keep their boats flying whereas the only crews were ‘low riding,’ ie not foiling. “Today was beautiful – great conditions with 15 knots, really good for these sort of boats,” concluded Bruni, who has British three time Olympic medal calling tactics for him at this regatta.

Finishing the day in third, on 18 points, six behind Team Tilt was Argo, of American two time Melges 32 World Champion, Jason Carroll. Carroll put together a consistent set of results, albeit after scoring a sixth in race one. 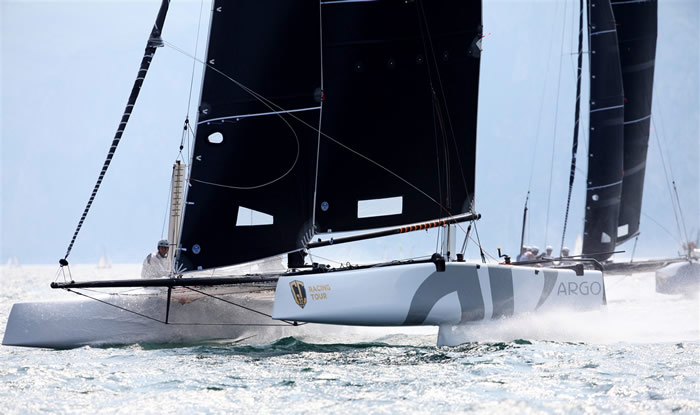 Carroll says they have worked to up their game since Riva del Garda, attempting to make less mistakes. “If you can just save yourself a few mistakes each race, that is five boats.” Then there is the issue of trying to prevent slowing down when rounding the first reaching mark. “It is very tempting to turn down when you go round the mark whereas in fact you have to keep it flying and fast at all times.”

Carroll is enjoying sailing in the 10 strong fleet here in Malcesine, which is set to grow to 11 for the 35th Copa del Rey MAFPRE in Palma next month, although he warns that it may not be physically able to grow it that much more and continue to have the high speed reaching starts. Plus “when you are going to two to five times the speed of a Melges 32, you don’t want to have too many boats to keep track of on the race course.”

Racing is expected to continue tomorrow at 1300 CET when the GC32s will once again be joined by other classes competing in Foiling Week such as Flying Phantoms and Moths.