One action-packed race held on day two of GC32 Lagos Cup 2 While racing started on time for the second day of the GC32 Lagos Cup 2 on Portugal’s Algarve coast, sadly only one race could be held before the wind and sea state escalated to levels felt to be too dangerous to sail. Nonetheless, the one race sailed was a good one, with the wind in […] 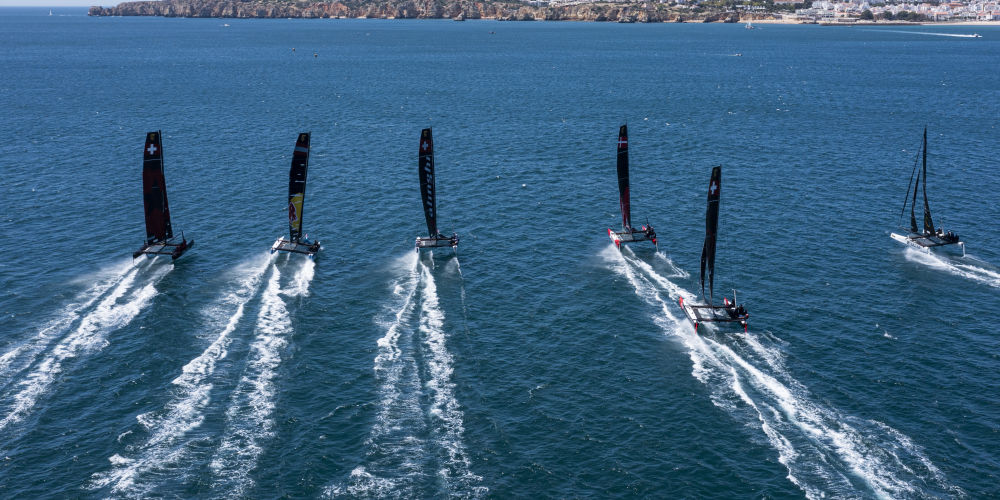 While racing started on time for the second day of the GC32 Lagos Cup 2 on Portugal’s Algarve coast, sadly only one race could be held before the wind and sea state escalated to levels felt to be too dangerous to sail.

Nonetheless, the one race sailed was a good one, with the wind in the high teens and gusting over 20 knots, and even though the breeze from the prevailing northwest was offshore, a short sharp chop had developed. The race also featured two lead changes.

Ernesto Bertarelli’s Alinghi executed a perfect mid-line start and led at the all-important reaching mark from Team Rockwool Racing. However the Swiss team’s tactician, 470 Olympic bronze medallist Nicolas Charbonnier admitted that at the end of the first run they misjudged a layline which allowed the ever-hungry Team Rockwool Racing to take the lead coming into the leeward gate.

The Danish team, which seems the greatest threat to the Alinghi GC32 throne at present, led for the next lap despite the Swiss nearly crossing towards the end of the first beat. Alinghi was allowed to split away on the second downwind, but Team Rockwool Race was still ahead at the second gate rounding where Alinghi did a costly round up-tack whereas the Danes held on port for longer before tacking.

This allowed Alinghi to gains more on the favoured left of the second beat: “The wind was shifting a lot, but we managed to make the best of it and could cross ahead of them,” said Charbonnier of this penultimate leg. “We stayed on port and then they went on the left side and lost even more.”

Team Rockwool Racing ultimately ended up third as Erik Maris’ Zoulou did well (as so many have done here) coming in fast to the last top mark along the starboard layline, causing them to leap from fifth place up to second. The Alinghi-Zoulou 1-2 finish repeated yesterday’s first race.

While all eyes were focused on the fight for the podium positions in the building breeze, teams were busy preparing to get underway for the next race as Swiss Foiling Academy was finishing. Unfortunately they were struck by a gust seconds before crossing the line. One of their bows crossed successfully causing them to finish the race, but the weather hull lifted and, despite teetering in a position where it could have gone either way, eventually the mast touched the water and a full capsize began, albeit at a snail’s pace. 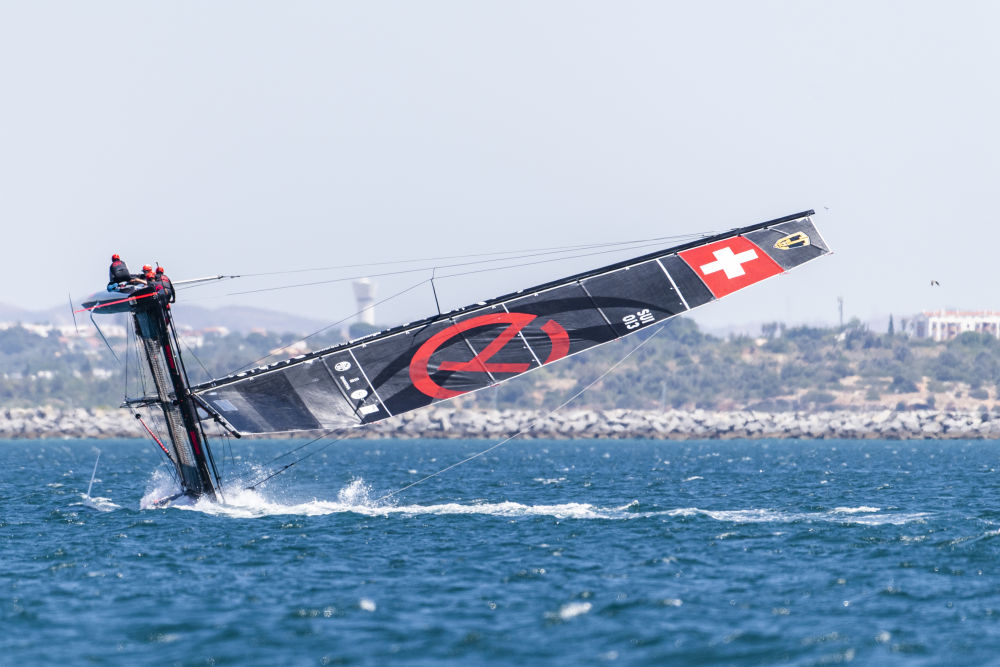 Fortunately this is not the first capsize on the GC32 Racing Tour and, after confirmed that all of the Swiss crew were safe and uninjured, Tom Ehler and Andy Drack on the circuit’s well equipped safety boat leapt into action, along with the Swiss Foiling Academy support crew, to begin the righting process. This was achieved in under 20 minutes.

Meanwhile in the building breeze the race committee was taking the opportunity to move the race committee boat to change to upwind starts. This typically occurs when the wind is sub-9 knots or more than 18-19. Sadly by the time the course was set up, the wind and sea state had built further and at 1445 AP over A flags were reluctantly hoisted by the race committee ending proceedings for the day.

Charbonnier agreed that this had been the correct decision. “They were definitely right to stop racing. It was a good call by the race committee.”

To make up for the lost schedule and in line with the GC32 Racing Tour manta of aiming “to provide competitors with the best foiling experience” – with further brisk winds forecast for the afternoon tomorrow, the schedule has been moved forward by three hours with racing due to get underway at 1000 local time.