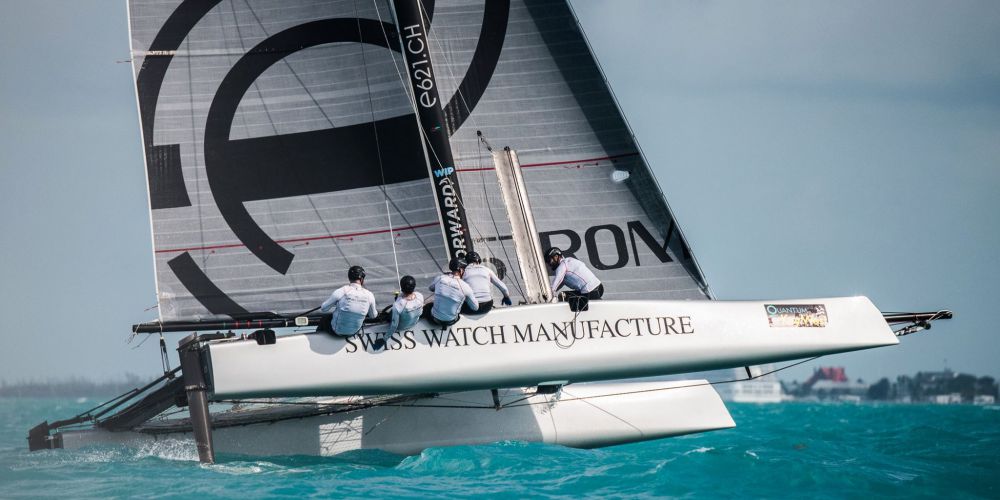 Quantum Key West Race Week provided the opportunity for the GC32s to make a spectacular debut in the USA.

During the five days of racing held in balmy temperatures off the southernmost tip of Florida, crews experienced a range of conditions. The beginning of the week saw lighter winds in which the foiling catamarans could sail at almost twice wind speed and the 20 knots on the final day enabled them to foil not only downwind, but upwind too.

ARGO set the pace at the regatta. Despite Quantum Key West Race Week being its first competitive GC32 outing, Carroll’s team benefitted from training time in Key West prior to the start and familiarity with the race course and seemed to relish the light to moderate winds early on. ARGO led up until the penultimate day, but was not dominant, with all but Leenabarca claiming bullets in races along the way.

By Thursday the ARMIN STROM Sailing Team and ZouLou crews were getting into their stride, and two races in stronger winds left the top three boats impressively tied, but with ZouLou ahead on countback, going into the final day.

Former Olympic Star sailor Flavio Marazzi’s team won the first race on the last day, the Swiss crew demonstrating their experience in the brisk conditions. They led around the top mark and then extended away.

Sadly while lying in second, one point off the lead, ARGO was forced to retire after this race when one of the fittings broke holding her transom-hung rudder to her hull – a race course littered with lobster pots providing an additional hazard for the crews.

“We thought about whether or not we could repair it or lash it in place, but given how rough it was out there it was going to be a recipe for further damage if we continued to race,” explained Jason Carroll.

While the GC32 can easily handle 20 knot winds, Friday’s short sharp chop meant crews had to throttle back. Marazzi explained: “The problem was that if you went too fast on the downwind, you jumped out of the waves and that was a risk. Since we just had to finish the race, it was a balance between holding back and going fast enough to win the regatta.” 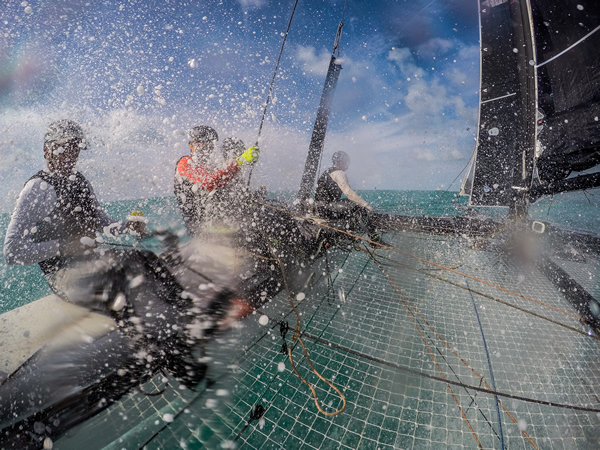 Despite three crews making their GC32 race debuts at Key West, Marazzi was pleased with the high level of racing and there being no stand-out crews. “It was great that everyone was on the same points going into the final day and that it doesn’t come down to the boats or materials or different sails, but boat handling and team work.”

Despite his disappointment, Jason Carroll enjoyed his week: “It was awesome – I had a great time. Clearly this was the boat to be on at this event.”

ZouLou skipper Erik Maris has previous experience on Extreme 40 and D35 catamarans, but had only spent one week training in October aboard the GC32 prior to Key West. America’s Cup multihull sailor Thierry Fouchier, the jib and the genniker trimmer on board and who has sailed most top racing multihulls, commented: “I am pretty impressed with the boat and all the systems work pretty nicely. It is still early days for the class, but I wouldn’t be surprised if they don’t attract more and more owners and get some very good racing. The boats are easy to sail and you can learn foiling fast. And they are pretty safe which is good.”

Former Team New Zealand helmsman Cameron Appleton was calling tactics on Alex Jackson’s Leenabarca, which suffered some technical set-backs. “I’ve never come last in a regatta before and had so much fun! Alex walked away with a huge smile on his face. These boats have made multihull foiling accessible to less experienced guys. You can get into them and steer them well, then it is about refining your skills. The learning curve is huge, but it is not on a level you can never achieve.”

During the latter part of the week Appleton said they had been hitting speeds into the high 20s, but it was the GC32’s handling that was impressive: “Once you get up on the foils and you are used to the sensation, the boats are actually a lot more comfortable than you’d think. We were doing stuff that you couldn’t do on other multihulls – bearing away and so forth – you would have flipped over. After racing we power reached at an angle that you would never usually consider on a multihull, but the sense of power and control was right there.”

Flavio Marazzi is also President of the GC32 Class Association and says that he hopes GC32 racing in Florida will become a regular feature over future northern hemisphere winters.

In the meantime the GC32s are gearing up for the start of the Europe circuit, the GC32 Racing Tour, kicking off with the GC32 Austria Cup, to be held on Lake Traunsee, Austria over 27th-31st May. The participation of more teams will be announced over the next few weeks.