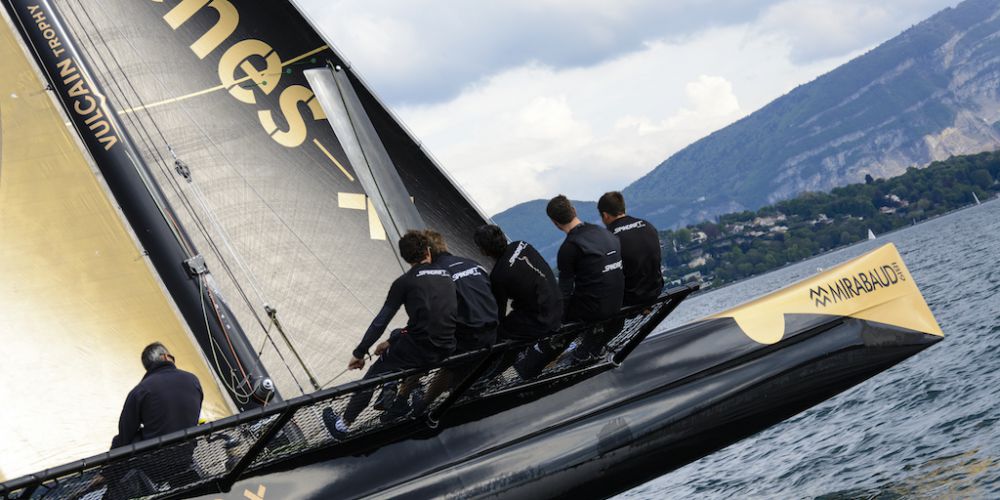 The future of sailing is, quite literally, flying. The catamarans that soared above the waves in the 2013 America’s Cup in San Francisco have taken the sailing world by storm. The boats have revolutionised sailing technology and competition, giving rise to the creation of new classes. The GC32 is one such class, a 10m one-design catamaran which can ‘take off’ in wind speeds of just 8 knots. The carbon fibre dragonfly has already established its place in regattas around the world, both in coastal venues and on some of Europe’s most beautiful lakes. Multihull experts Dona Bertarelli and Yann Guichard and their Spindrift racing team are passionate about innovation and elite international competition, and have decided to join the GC32 Racing Tour 2015.

Spindrift racing has also confirmed its participation in the Tour de France à la Voile in July, this year to be sailed in Diam 24 trimarans, as well the D35 championship on Lake Geneva, where Dona Bertarelli will be at the helm of Ladycat for the 9th consecutive season. Offshore, the team will make its first attempt at beating the Jules Verne Trophy record aboard the maxi-trimaran Spindrift 2.

So why take part in the GC32 circuit? “It’s clear that the future of sailing is currently leaning towards these foiling boats,” explains Yann Guichard. “It’s not just in the America’s Cup – it’s happening with other contact racing boats too, such as the GC32. Even in offshore racing, the new Vendée Globe monohulls have foils to partially raise the boats into the air so they can sail faster. Performance and innovation are part of Spindrift racing’s DNA, as is our desire to compete at the very top level of international sailing. The GC32 circuit is a perfect match to satisfy both our sporting goals and our partners’ objectives, who will benefit from international exposure in the five host countries. We are excited by the opportunity to learn to foil in a matter of weeks and to compete against the crème de la crème in what promises to be an ultra-competitive circuit.”

Thanks to their L-foils and T-rudders, the GC32s take off in very light winds and quickly reach speeds of 25 knots, with occasional bursts of more than 35 knots. You don’t have to be an expert to be blown away by the sight of these boats as they glide more than a foot above the water’s surface. Last season the class attracted competitors from a wide range of sailing backgrounds, from Olympic champions and America’s Cup veterans to passionate boat owners. The first official pictures from the event created a huge buzz, doing justice to the pun used by the organisers to describe the event: ‘Foiling in love’! This year’s GC32 circuit will have a larger fleet and will visit Austria, England, Germany, Italy and France over the coming months.

“One of Spindrift racing’s goals is to defend our colours in the biggest events in professional sailing,” says Dona Bertarelli. “We are thrilled to be able to join these pioneers who are inventing the multihull of tomorrow, giving our partners access to a circuit that is highly visible across Europe. Yann competed in the Extreme 40 class for a number of seasons and was among the first to compete in the AC45 wing-sailed catamaran, always with the aim of producing good results. Together, we will race on the elegant, demanding boats of the D35 class on Lake Leman, again in search of a podium finish. The G32 is a logical next step for the team but, more importantly, it’s a tremendous sporting challenge.”

GC32 Class President and former Olympic Star sailor Flavio Marazzi commented: “I warmly welcome the newest team, Spindrift racing, to the GC32 class. We believe we can provide Dona Bertarelli and Yann Guichard with one of the most exciting new boats that can be raced on a one design circuit at the moment.

“It was great to hear that this internationally active and well managed team will enter the 2015 GC32 Racing Tour with their own boat. The team will enjoy very exciting races and experience foiling at its best in our class.

“We want the class to be a family affair where owners, sailors, sponsors, event managers and friends can meet at regattas to enjoy this new and special form of sailing. The GC32 Racing Tour in 2015 will set the benchmark for the future. We start this year with some of best and most established teams in competitive sailing and looking forward to building up a strong series over the upcoming years.

“We are looking forward to many more world class sailing teams joining our sailing series in the future.

“I wish Spindrift racing all the best, exciting competition with lots of ‘airtime’.”