Rockwool on the assault While the results once again might indicate that Ernesto Bertarelli’s Alinghi team had it all their own way, topping the leaderboard after day one of racing at the GC32 Lagos Cup 2 here on Portugal’s Algarve coast, this was far from the case. The race management team under PRO Miguel Amaral (standing in for Stuart […]

While the results once again might indicate that Ernesto Bertarelli’s Alinghi team had it all their own way, topping the leaderboard after day one of racing at the GC32 Lagos Cup 2 here on Portugal’s Algarve coast, this was far from the case.

The race management team under PRO Miguel Amaral (standing in for Stuart Childerley, who is on duty at the Olympic Games) was patient in keeping the international flying catamaran crews ashore in the Marina de Lagos. The boats were only called out at 1600 with the first race getting underway just after 1700 local time when the breeze had veered into the northwest and built to 12 knots. As the forecast had predicted, over the next two hours the wind built and by the time the boats were sent home after four races, of the five scheduled, the offshore breeze was gusting well into the 20s. 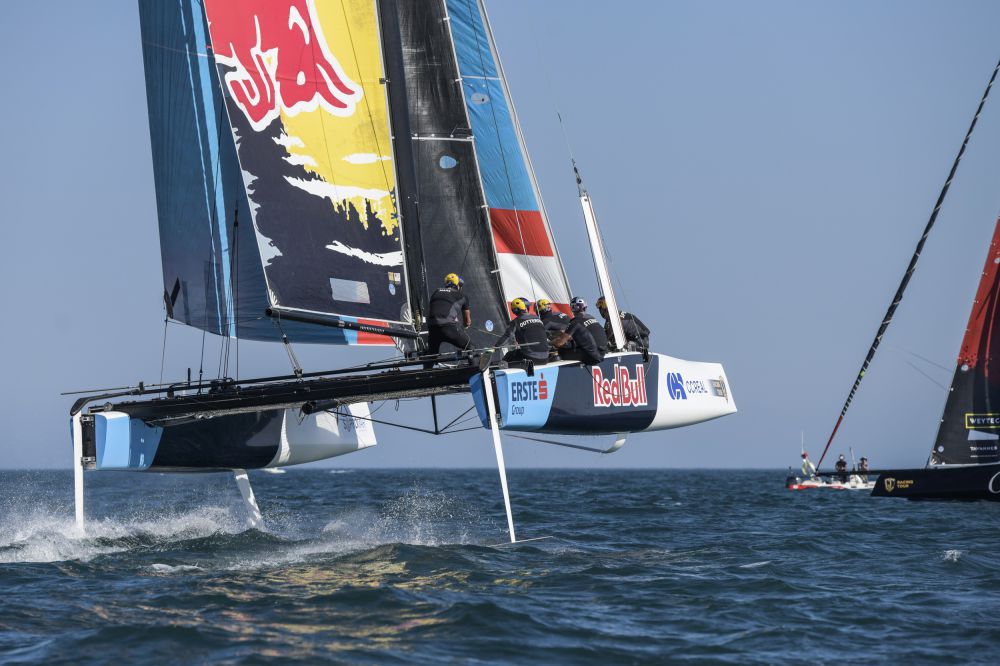 In the conditions it was vital to win the start and then hang on. Following their comfortable victory at the GC32 Lagos Cup 1 earlier in the month, Alinghi laid down a marker in the first race, nosing ahead at the first reaching mark and consolidating from there to finish ahead of Erik Maris’ Zoulou. But most impressive was the two time America’s Cup winners’ fourth race when both they and the Nathan Outteridge-steered Red Bull Sailing Team were called OCS at the start, and had to drop back behind their competitors. Despite trailing into the reaching mark, by the leeward gate the white boat with the red flash had stormed back to recover second place.

Alinghi helmsman Arnaud Psarofaghis explained: “We fought really hard to come back through the fleet, but we had good boat speed and good handling and Nico [Charbonnier] saved us with a nice layline call on the first downwind which got us past Rockwool…”

He added that they hadn’t got the good starts they wanted in races two and three and so still have work to do. Nonetheless in four races Alinghi never finished off the podium and holds a useful two point lead on which to build. “It was exactly the start we wanted, but we need to work harder over the weekend because the fleet is raising its game. Everyone is sailing well and one mistake equals one place,” concluded Psarofaghis.

The boat that did manage to get the starts it wanted in today’s middle two races was the Nicolai Sehested-steered Team Rockwool Racing. The Danish team translated getting ahead at the first mark into two bullets, ahead of Alinghi and Red Bull Sailing Team respectively.

“The first race we were missing out a little bit, but otherwise we were pretty happy with the 1-1-3,” said the team’s mainsheet trimmer, GC32 veteran Rasmus Køstner.  “When the breeze is in, we feel fast and we’re sailing very well with good manoeuvres and good starts, which makes it a little easier. There are good people on the start line, so we’re happy.”

Today was the birthday of Team Rockwool Racing’s Portugal shore crew Renato Conde. “He asked for 60% wins for a birthday present and after three races it looked like that. We should have stopped then!” said Køstner. Team Rockwall Racing lies a strong second overall astern of Alinghi, with Red Bull Sailing Team a further two points back in third.

The fourth and final race saw Christian Zuerrer’s Black Star Sailing Team making a blazing timed run into the windward end of the line, this slingshot technique edging them into the lead as Alinghi and Red Bull Sailing Team had to apply their handbrakes after being called OCS. Black Star Sailing Team was first into the reaching mark and on the next run they had extended enough that even the immaculate Alinghi were unable to reel them in. 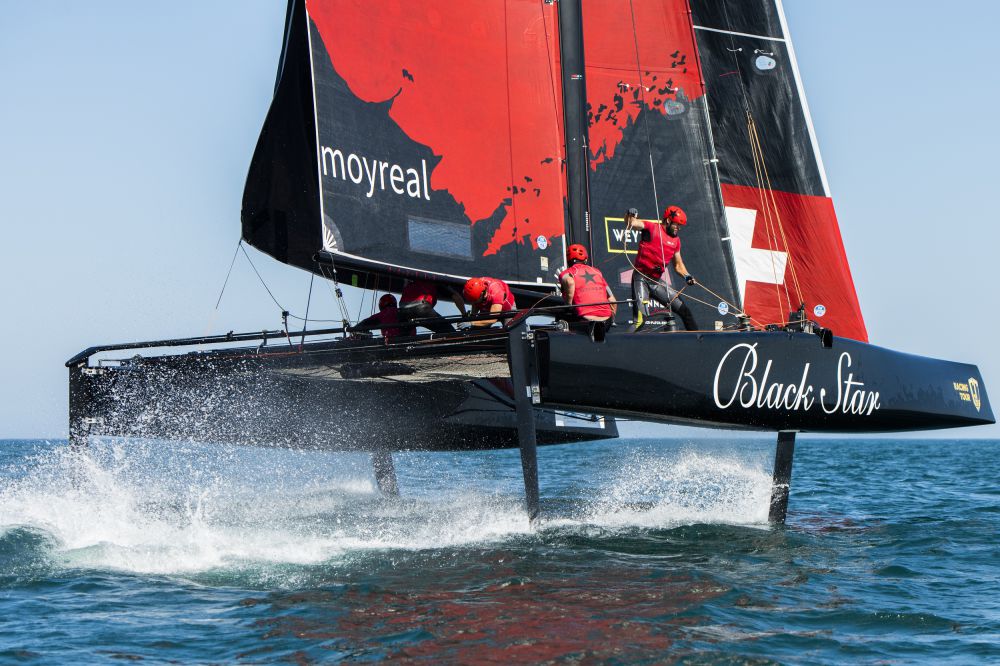 “We just went back to the basics, did what we could and kept it simple,” explained Zuerrer. “Definitely, the competition is much closer, the level is higher than the last event following the 18 months break. The race committee did a great job keeping us ashore rather than sending us out to hang out on the water all day in the sun. It was a long day for everyone, but they made a good decision.”

Tomorrow the wind is set to fill in more strongly and earlier, so it looks unlikely the 1300 start will be delayed.