For its fourth season, the GC32 Racing Tour will have its first female crew in New Zealand’s Sharon Ferris-Choat.

Sharon comes from a Kiwi sailing family – brother Justin is a well-known sailmaker and Volvo Ocean Race sailor’, while her career has been no less illustrious, ranging from Tracy Edwards’ record-breaking offshore catamaran campaigns to representing her country at the Olympic Games: In the Europe in Atlanta in 1996 and the Yngling keelboat at Athens in 2004. 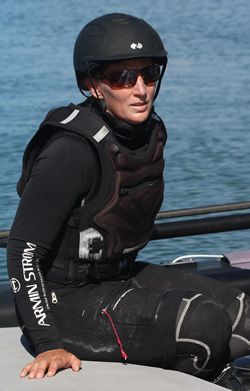 “Yes, my career’s been very odd – one extreme or the other, very fast or very slow!” she acknowledges.

Her catamaran career came about when she joined Tracy Edwards’ crew on the 28m long maxi-catamaran Royal & SunAlliance in 1998 culminating in their attempt on the non-stop round the world record, the Jules Verne Trophy. This was alongside the likes of future Volvo Ocean Race skipper Sam Davies, Australian navigator Adrienne Cahalan, and solo sailors Emma Sanderson (née Richards) and Miranda Merron.

“I went down to Hamble to train with Shirley Robertson when I was racing the Europe. I got to the marina gate and said that I was there to train with Shirley and the girls, and they thought that I meant Tracy and the girls! They told me what Tracy was up to and I diverted, I didn’t even make it to the Europe park! Two weeks later I found myself on the boat in New York.”

More than a decade and two daughters on, Sharon is getting back on the water. Having put herself on maternity leave since her youngest was born two and a half year ago, she recently felt the call of the sea again. “I met up with the Team SCA girls [in the Volvo Ocean Race] in Auckland and they inspired me, along with Neil my husband, to get back into it. Then I saw Flavio flying across the water in the GC32s and I said ‘that is what I want to do’.”

She emailed old friend, Flavio Marazzi, skipper of ARMIN STROM Sailing Team and GC32 Class Association President, and asked him whether it was practical for a mixed crew to join the GC32 Racing Tour. Marazzi said it was.

Last autumn she came to Marseille One Design with the ARMIN STROM Sailing Team and convinced Marazzi to bring his GC32 to New Zealand, where she joined his sailing team.

One of the objects of the exercise was to provide up and coming Kiwi sailors with the opportunity to sail a state of the art foiling catamaran. This doubled as a crew search for the GC32 Racing Tour. Sharon explains: “I wanted to do for the next guys what people like Sir Peter Blake and Russell Coutts – and Tracy as well – had done for me.”

100 initial applicants were whittled down to 39. These were then tried out up in Sharon’s homewaters, the Bay of Islands, and Auckland, taking in Bay of Islands Race Week and the Auckland Jack Tar Regatta. They comfortably won both.

Since then an eight-strong squad has been chosen, which they will rotate this season on the GC32 Racing Tour.

While she and Marazzi will share helming duties, Uruguayan Diego Stefani returns as trimmer/coach. They are joined by Kiwi match racer and cat sailor Phil Robertson on mainsheet/tactics. Among the young Kiwis selected are 19 year olds Alex Bryning and Ned Dalbeth-Hudson, while the squad also includes Irish match racer and cat sailor, Shane Diviney.

So how has she found foiling catamarans? “The biggest thing for me is strength and fitness. Flavio’s been patient and trusting enough to give me a lot of driving time, which has been awesome.

“For me, getting it foiling is not that difficult, it’s keeping it foiling and keeping the whole crew connected to keep it that way. You’re doing foiling gybes like they do on the America’s Cup boats, but all it needs is for one person to be out with their timing for it all to go wrong. Plus everything is done at such a speed…

“You have your play book, but your play book changes with every knot of wind speed, so it’s about making sure that you’re all on the same page within that book.”

Sharon says she is looking forward to her debut on the GC32 Racing Tour: “It’s an awesome opportunity. It’s up to us to prove that we are capable. The most important thing is that we’ve got a five year plan for a mixed team, which will grow into a two boat team in the future. Obviously for that to happen we’re looking for new partners.”

The aim is to campaign two boat next year on the GC32 Racing Tour.

As to the possibility of a GC32 Racing Tour happening down under, Ferris is hopeful. One GC32 already resides in New Zealand in Simon Hull’s TeamVodafoneSailing. “It would be fantastic to get an Asia-South Pacific Tour going on in the European winter. One of Flavio’s goals is to promote the GC32 class and to get more regattas going in different parts of the world.” 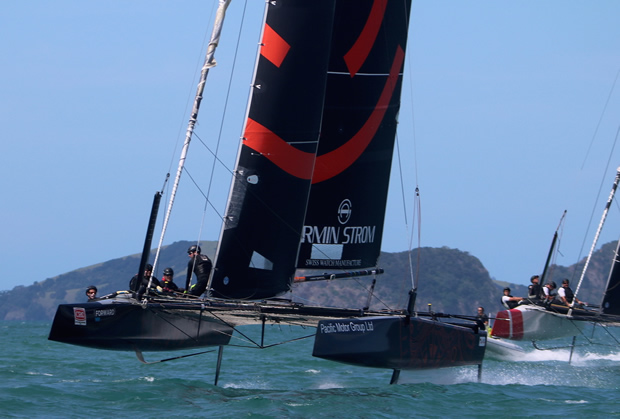