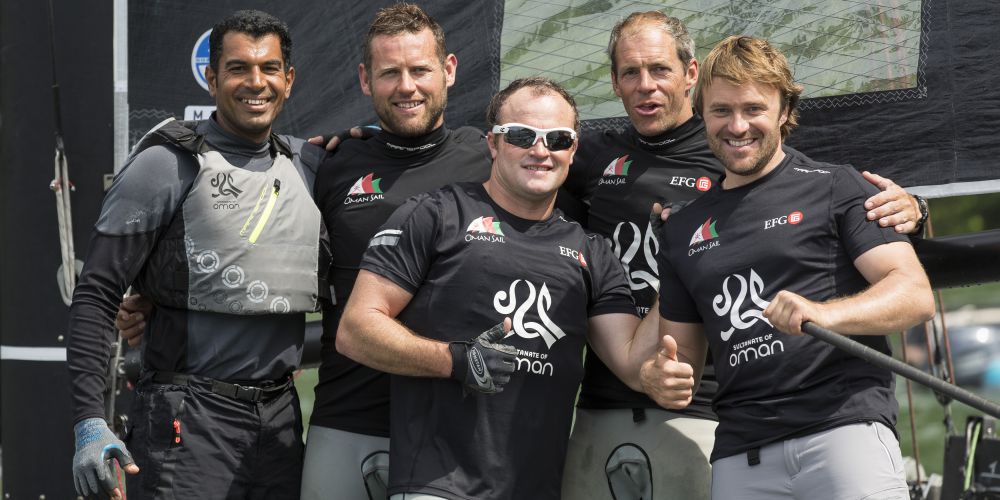 Spindrift racing wins the day, Sultanate of Oman the regatta

Despite the rapid improvement shown over the last two days by Spindrift racing, it was Sultanate of Oman that came out on top to claim the Austria Cup, the opening event of the 2015 Bullitt GC32 Racing Tour.

Crews arrived in the race centre in Gmunden this morning to a glassy Lake Traunsee. In an attempt to find wind, the race area was transported 12km to the southern end of the lake at Ebensee. Fortunately this proved a success with 8-10 knot winds that were stable, albeit inadequate to get the GC32s foiling. Nonetheless six races were sailed in swift succession.

With Sultanate of Oman out in front, the fight was intense for the remaining podium places between Alinghi, Spindrift racing and Team ENGIE. This at one point caused a monumental three way match race with boats putting in eight tacks up the 700m long beat.

Alinghi had an up and down day, with two wins and two lower results, but, as on Saturday, it was Spindrift racing that excelled – the only team never finishing off the podium today, a performance that caused them to finish second overall, three points ahead of Alinghi. 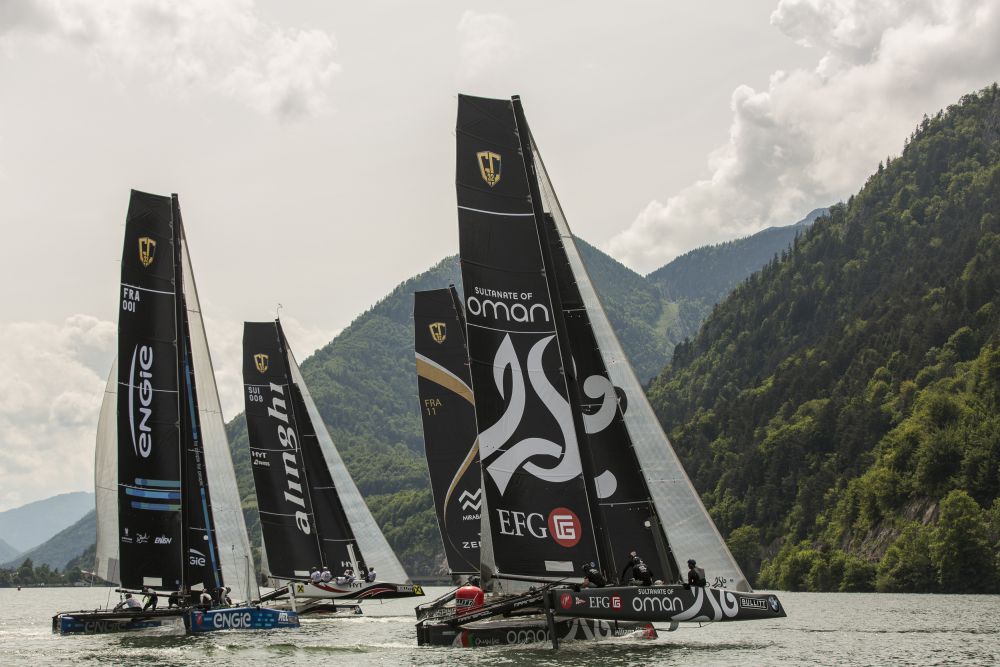 “We have been the best for the last two days – which was a nice result,” said a beaming Spindrift racing skipper, Yann Guichard. “The first two days were hard for us, but we improved day after day and climbed the leaderboard to second place. I am really proud of the team – they did a fantastic job.”

Guichard, a multihull specialist who this year is campaigning boats ranging from the 40m Spindrift 2 to the 7.3m Diam trimaran, is enthusiastic about the GC32 after completing his first regatta in it. “It is easy when you start, but after if you want to progress you need to spend time training. But it is a really nice boat – you can feel its potential in only eight knots – you can fly.”

Morgan Larson, helmsman on Alinghi, came ashore pleased after a day sailing in better conditions, but unhappy to have been beaten by Spindrift racing. “It was nice to finally work on things that we were struggling with within our team, eg: communication and where to position ourselves. Unfortunately Spindrift had a fantastic day and overtook us, but hats off to them for doing that.” Larson paid tribute to his arch rival from the Extreme Sailing Series, Sultanate of Oman, predicting that the Omani team has set a new benchmark in the class.

The ‘benchmark’ here, despite two deep results today, finished the Bullitt GC32 Austria Cup with an eight point lead. Skipper Leigh McMillan said he enjoyed today’s steadier breeze that made for more ‘normal’ racing and expressed surprise at his team’s victory: “It’s quite unexpected! We hadn’t even used the spinnaker before we came here. We had one day to try and figure out how to gybe, to do the boards, etc. In lighter winds for sure it is easier, a bit more like an Extreme 40 rather than when you are up and fully foiling, so that probably played into our hands.” 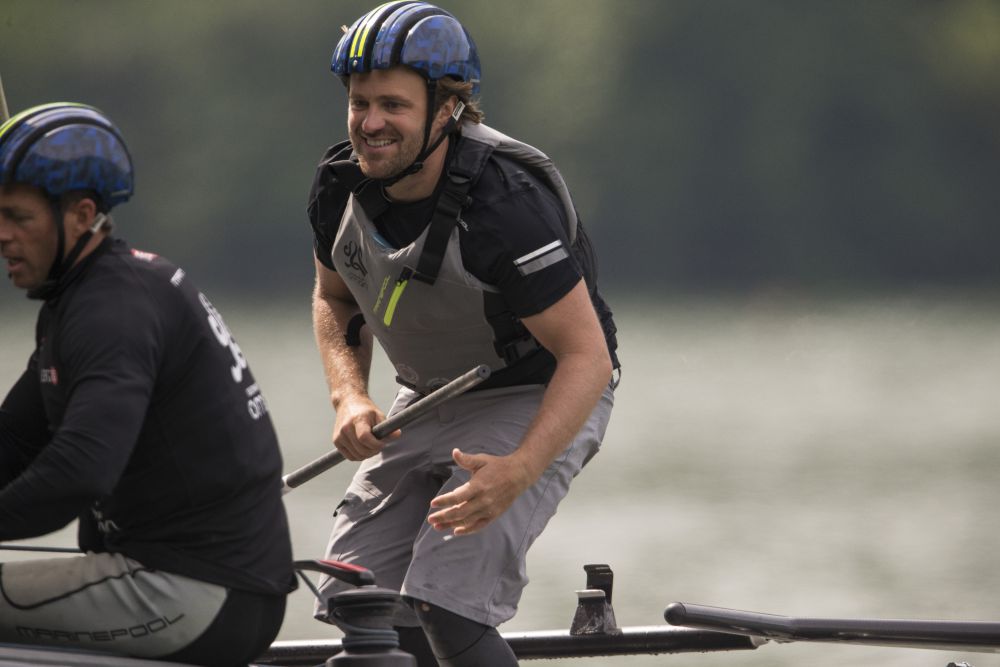 McMillan is looking forward to the Cowes Cup for the GC32s, taking place over 24-27th June, when he hopes for more wind and the possibility of breaking Alinghi’s new record of 39.2 knots in a GC32. “Getting up on the foils and getting it absolutely rippin’ is great…”

Team ENGIE put in a sterling effort, finishing off the podium, just four points off Alinghi. Skipper Sebastien Rogues was very satisfied with their performance: “We proved we can match Alinghi and Oman who’ve won the Extreme Sailing Series, so yes, we are happy. I began multihull sailing just four months ago and I’ve been up against guys who’ve been sailing them for 20 years or more. For that I thank my team.”

Having won the GC32 last events in Key West and in Marseille, Flavio Marazzi’s ARMIN STROM Sailing Team had a disappointing regatta, finishing last which their Swiss three time Olympic Star sailor skipper attributed to the influx of Extreme Sailing Series teams and America’s Cup sailors to the class and their greater experience. “We still have to learn a lot about how to handle this boat and where to put it at the start and how to get off the line in clear air.”

As GC32 International Class Association President, Marazzi commented: “Lake Traunsee is a great location, but we need better wind conditions to show off potential of these boats on foils when they can sail at 30+ knots. This event is always really well organised. I look forward to the GC32s returning in 2016.”

Next up for the Bullitt GC32 Racing Tour is the Cowes Cup over 24-27th June that will culminate in the JP Morgan Asset Management Round the Island Race.