Sultanate of Oman aims for season title at Marseille One Design

Marseille, home of the powerful Mistral wind, will for the second consecutive year host the Bullitt GC32 Racing Tour’s final regatta of the season, Marseille One Design. This event, running over Wednesday, 30th September until Saturday, 3rd October, is backed by the Ville de Marseille in the build-up to it being European Capital of Sport for 2017.

Last year’s racing, on the course between Marseille and the off-lying Frioul islands, took place in flat water and big breeze and proved sensational for the one design foiling catamarans. This year competitors are hoping for a repeat allowing their nimble GC32s to foil at 30+ knots.

Finishing third at last month’s Trofeo di Roma in Civitavecchia has left Ernesto Bertarelli’s Alinghi team with its work cut out if it is to prise the top spot for the 2015 Bullitt GC32 Racing Tour from Sultanate of Oman. But while the Omani team may now be three points clear of them overall, there is a possible chink in their armour with the boat’s regular crew away competing at another regatta next week.

Australian Nathan Outteridge is relishing the challenge of making his Bullitt GC32 Racing Tour debut, but realises that in replacing Leigh McMillian for this regatta, he has big shoes to fill: “I’ve watched the videos of the racing and it looks fast and furious. It’s going to be fun stepping in for Leigh and his team in Marseille.”

French GC32 teams, Spindrift racing and Team ENGIE, may hold a slight psychological advantage competing in Marseille in front of a home crowd, even if both teams herald from further north on France’s Atlantic coast.

After making some line up changes for Civitavecchia, Team ENGIE will enjoy the return of Devan Le Bihan from his America’s Cup World Series duties as trimmer for Groupama Team France. 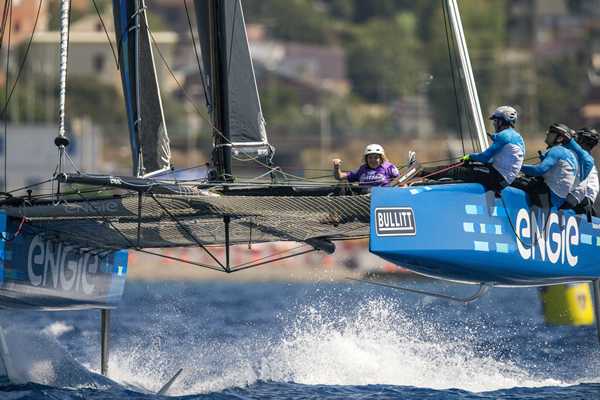 Team ENGIE skipper Sebastien Rogues is looking forward to racing next week: “Marseille is a magnificent place to sail, and it’s a real advantage to be competing on a French stage with a French crew. I am positive we will have an excellent regatta and Marseille is a venue truly made for yacht racing – that’s why it was proposed that the nautical events should be held there as part of Paris’ bid to host the 2024 Olympic Games: It’s a very pleasant city with a bay that accommodates flying catamarans perfectly.”

Rogues adds that his aim for Marseille One Design is to do better than in Civitavecchia. “We are going to do everything we can to finish as high in the overall results as possible, but to do that we’re going to have to apply everything we’ve learned since that first stage this year in Austria. We’ll have to size things up quickly to get the best out of both our boat and crew.”

As a sailor best known for racing offshore, Rogues admits that he prefers racing in Marseille’s typically strong conditions, however at the end of their first season (and a year into racing their GC32 – Rogues’ team made its foiling cat debut at Marseille One Design in 2014) they feel confident of their ability in most conditions. “Conditions in Marseille are particularly good for us, but the playing field is completely level – you just have to do your best when the moment calls for it: That, I think, is the key to success.”

However as strong wind speed kings, Team ENGIE will face stiff competition from ARMIN STROM Sailing Team, skippered by GC32 Racing Tour Class President, Flavio Marazzi, which won the windiest regatta so far this year, in Cowes and was winner of Marseille One Design in 2014.

While it is all about the racing, Marseille may also provide the conditions necessary to better the present GC32 speed record of 39.21 knots set by Alinghi in May. The next stop is certainly 40 knots – respectable pace for a one design 32 footer.

Manfred Ramspacher, CEO of Sirius Events, organiser of Marseille One Design said: “The City of Marseille and Sirius Events are very pleased to welcome again the Bullitt GC32 Racing Tour to Marseille for the final leg of this European circuit and also for the second time this year following the Test Event in April.”