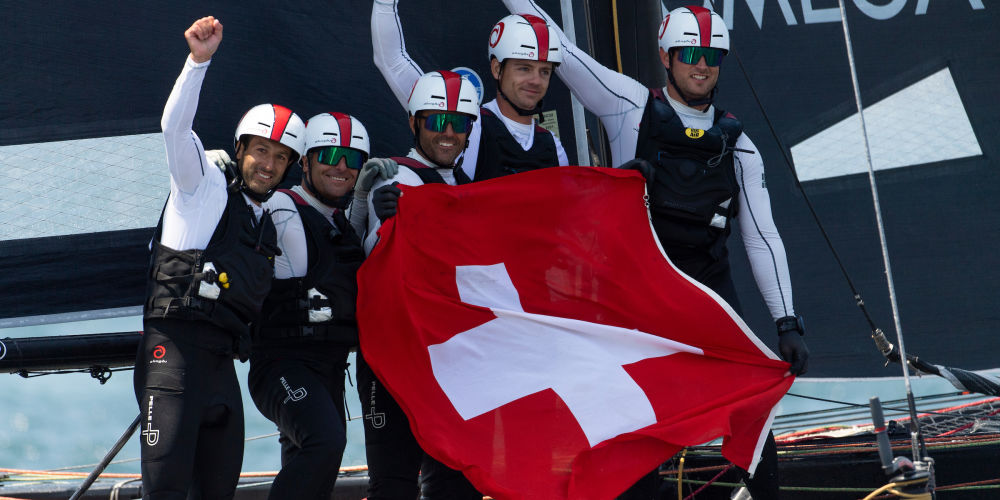 Swiss GC32s on top in Lagos on National Day

After Saturday’s extreme conditions, Sunday’s foiling catamaran racing on the Algarve completed the test with five races held in light and medium winds.

Anticipating 20+ knot winds, the decision was again made to start at 1000, with upwind starts. In fact the wind was up initially, but for the first races had dropped to ten and only after a lull in race four, did it finally bang back in, gusting to 20+. 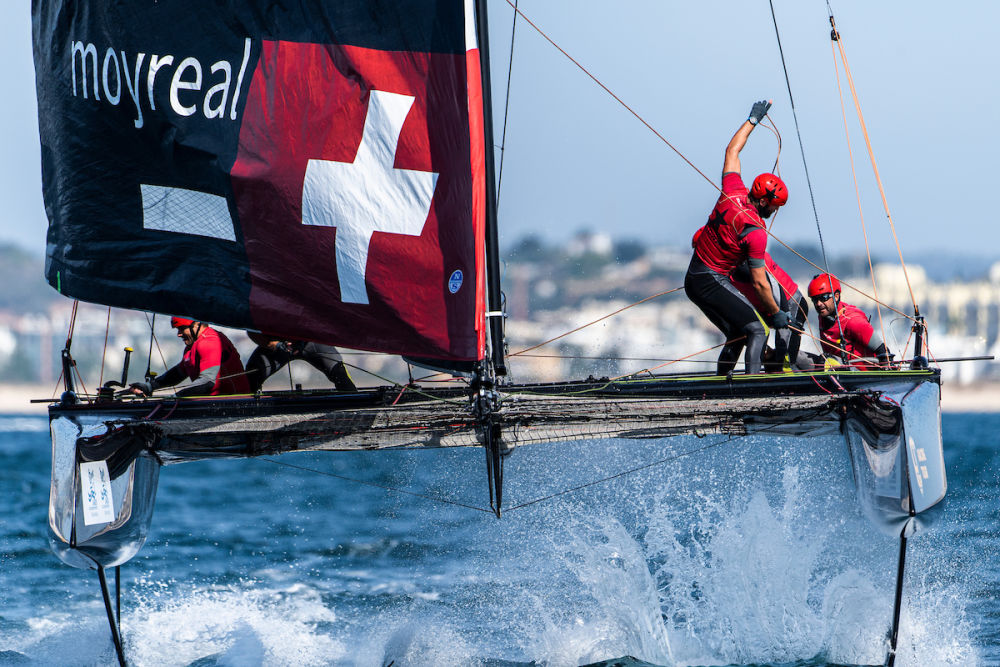 Like yesterday Black Star Sailing Team dominated early, winning the first two races and the fourth, when they were most successful in joining up the puffs and shifts on the course during the light race. They started the final race just three points from Alinghi,  but were unable to overcome this deficit.

“We didn’t sail our best day, but we did just enough to win the regatta,” said Alinghi helmsman, Arnaud Psarofaghis. “Black Star sailed really well. In the last race they gained a point, but we stayed right behind them, so they couldn’t get away from us. We made too many mistakes, but we were able to avoid any bigger dramas.”

As to Black Star Sailing Team’s performance Christian Zuerrer commented: “I’m happy. It was a strange day for conditions, but we managed them the best of all the teams.” Much of this came down to correct moding in the rapidly changing conditions. Zuerrer, who trims main on board as Kiwi Chris Steele helms, said he preferred the closer and more tactical racing provided by upwind starts.

So should Alinghi be worried going into the World Championship in Villaisimius, Sardinia mid-September? “Hopefully,” Zuerrer feels. “It is more interesting when not only one boat is winning.”

Zuerrer’s helmsman Chris Steele added: “It was good fun – a great day on the water. It was tricky with the shifts and the pressure, but we did a nice job getting in phase with the first shift in all of the races and the guys did a nice job of moding the boat and staying fast. It was a really dynamic day which is encouraging for us as those were conditions in which you’d expect Alinghi to be strong.”

While the Danish Team Rockwool Racing team had a storming Saturday when they hit 39.5 knots, neither they, nor Red Bull Sailing Team had final days to remember. In contrast, one of the longest serving GC32 campaigners, Frenchman Erik Maris and Zoulou, after struggling in yesterday’s intense conditions, basked in them today, winning the third race after a blistering start. With only one race off the podium today, they bounced up the leaderboard finishing third on equal points with Red Bull Sailing Team, but prevailing on countback.

“It was wonderful conditions, great sailing – the guys did a great job on a great boat,” said a delighted Maris. “We had some good starts – you need those. The race committee did a fantastic job and everyone is happy. When I look at the guys behind us I am somewhat proud – Nathan Outteridge, the Danes, etc. It was great fun.” 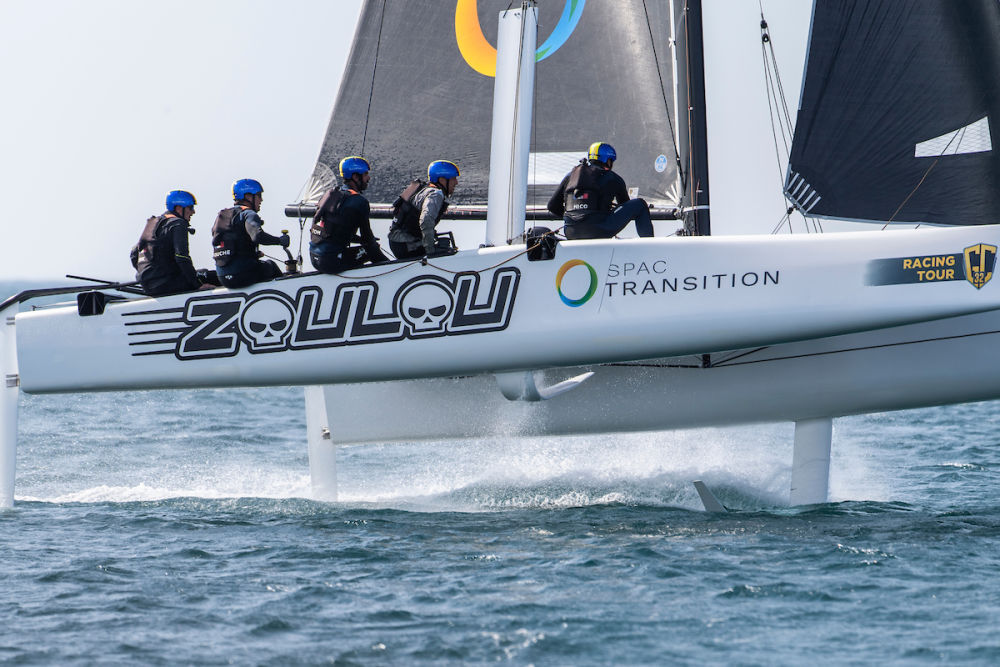 The biggest cheer today went up but not for the top teams. Swiss Foiling Academy, co-skippered by mainsheet trimmer Julien Monnier and helmsman Loïc Forestier, had a difficult week capsizing on the opening day, although they missed no races as a result. In today’s final race, they started by the race committee boat, tacked and took the most extreme right option and by the top mark had nosed in front. With the powerhouse teams tied up in their own private battles, Swiss Foiling Academy went on to claim their first ever bullet on the GC32 Racing Tour.

“The wind got stronger and we like that,” said Forestier. “We didn’t have a good race before and we wanted to finish the event in good spirits. We went right in good pressure and from there the most important thing was that we stayed in front. We have learned a lot.”

This, and the Swiss 1-2, was a worthy result for Swiss National Day, marking the 730th anniversary of the Swiss Confederacy’s formation. 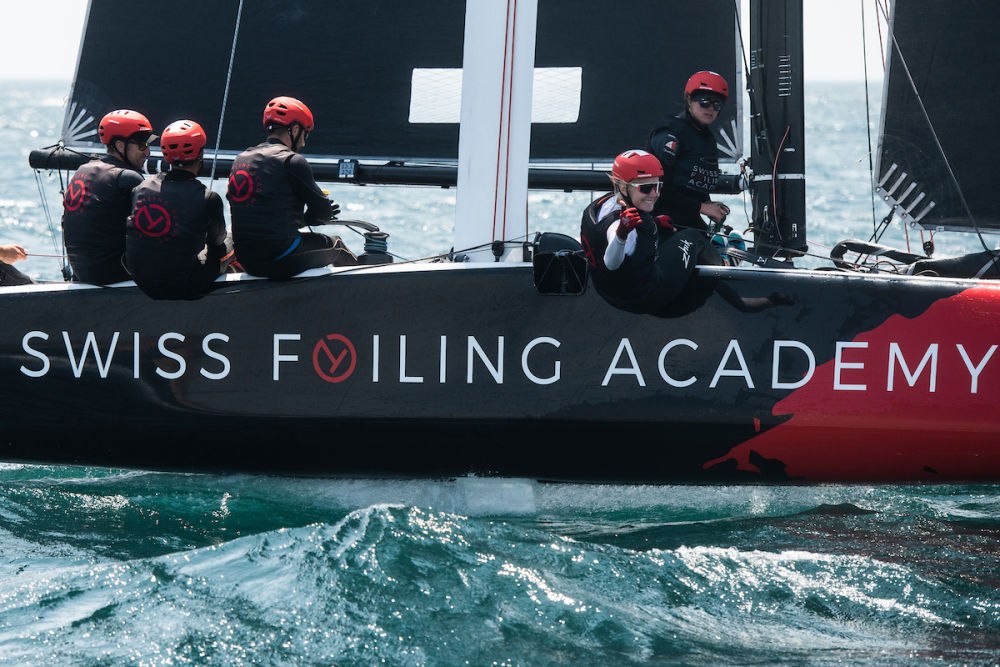 GC32 game, set and match for Alinghi in Mar Menor