Switzerland owns the podium at GC32 Riva Cup’s conclusion Despite an impressive late charge from their compatriots on Team Tilt, the Jérôme Clerc-steered Realteam hung on to its lead to win the GC32 Riva Cup by four points after another three race day held in perfect 10-16 knot conditions on Italy’s Lake Garda.

Despite an impressive late charge from their compatriots on Team Tilt, the Jérôme Clerc-steered Realteam hung on to its lead to win the GC32 Riva Cup by four points after another three race day held in perfect 10-16 knot conditions on Italy’s Lake Garda. Flavio Marazzi’s ARMIN STROM Sailing Team managed third place, making the podium of this first event of the 2017 GC32 Racing Tour a 100% Swiss affair.

Proceedings got underway today with a last round of the GC32 Racing Tour’s new ANONIMO Speed Challenge – an opportunity for the crews to eek out the fastest speed from their foiling catamarans and for on board guests to enjoy first-hand the thrill of going 30+ knots on a flying sailing yacht.

Today, it was the turn of Jason Carroll’s Team Argo to record the high score of 27.65 knots. However this was not enough to better the speed of Flavio Marazzi’s team which managed 31.02 knots on Friday.

“It was good fun and a nice opportunity for the guests to have this once in a lifetime experience, the same as we do going at 32-35 knots on the race course,” said Marazzi, who is GC32 International Class President. He added that he likes the reach-gybe-reach format as aside from cranking the boat up to maximum speed, going into a manoeuvre and then back to full pace again requires much skill. “It takes time to prepare for the manoeuvre and to do it at exactly the right moment.”

At the prizegiving at the Fraglia Vela Riva, Marazzi was presented with an ANONIMO Nautilo watch. 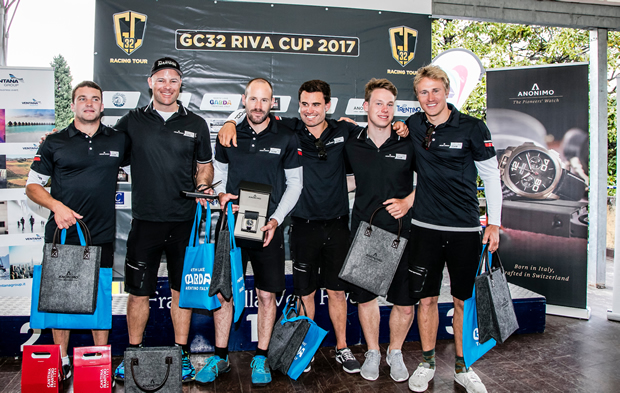 Jérôme Clerc was thrilled that he and his mostly new crew on board Realteam had secured their first ever GC32 Racing Tour victory: “It shows we are in good shape. Today was amazing, great fun, match racing with Team Tilt. We knew we were a few points ahead of them, so we just had to keep things simple to stay in front. But they pushed really hard.”

There was a small heart failure moment when Realteam was among the backmarkers in one start. Nonetheless they managed to fight back. Under normal circumstances their 3-3-1 scoreline would have been enough to win the day, but Team Tilt was still in invincible form: In winning today’s first two races, they continued Saturday’s winning streak, scoring five consecutive bullets.

“It was a really difficult first day, but then it was pretty much perfect,” observed Schneiter, whose team is one of the favourites for next month’s Red Bull Youth America’s Cup in Bermuda. “I am really proud of the team. Our starts were not that good, but we were able to climb through the fleet. Most gains were made at the leeward gate which is where we struggled most on the first day – choosing the gate and the tactics with other boats. Then our weakness became our strength.”

Jason Carroll’s Team Argo ended the event fifth overall, enough for the US team to claim the first round of the GC32 Racing Tour’s Owner-Driver Championship. Carroll acknowledged they were trying to return to the form that saw them finish second at Marseille One Design last year: “The last few days have been kind of frustrating for us because we started off with good speed and good starts, but the last two days have been more of a struggle. We didn’t get off the line that well. We made a couple of tough decisions downwind, but it was all stuff that more practice can help with.” 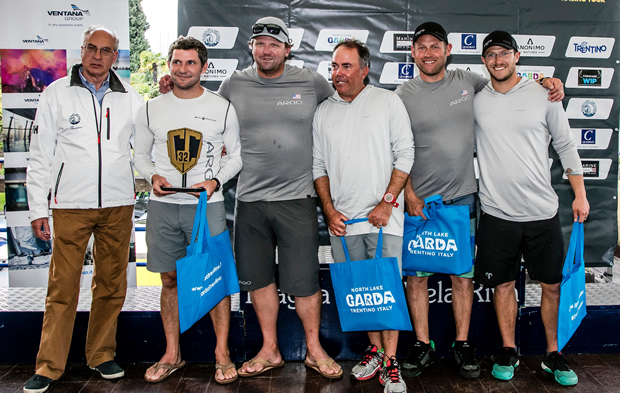 Today’s final race provided a small glimpse of what we can expect to see more of this season with other teams starting to break the Swiss dominance, including GC32 Racing Tour newcomers, Spain’s I’M Racing Movistar and Federico Ferioli’s Codigo Rojo Racing mixing it up with the frontrunners. Mamma Aiuto! led for much of the final race. The Japanese crew included two from the Japanese Red Bull Youth America’s Cup team.

Of the youth teams heading for Bermuda next month Team Tilt is clear favourite, the plight of the Bermudan crew on Team BDA not helped by their capsize yesterday and, similarly, Team France Jeune by their capsize in today’s first race – all the crew were safe and their boat was quickly righted, but they were unable to complete any races today.

Racing resumes at the GC32 Villasimius Cup, in southern Sardinia over 28 June to 1 July .