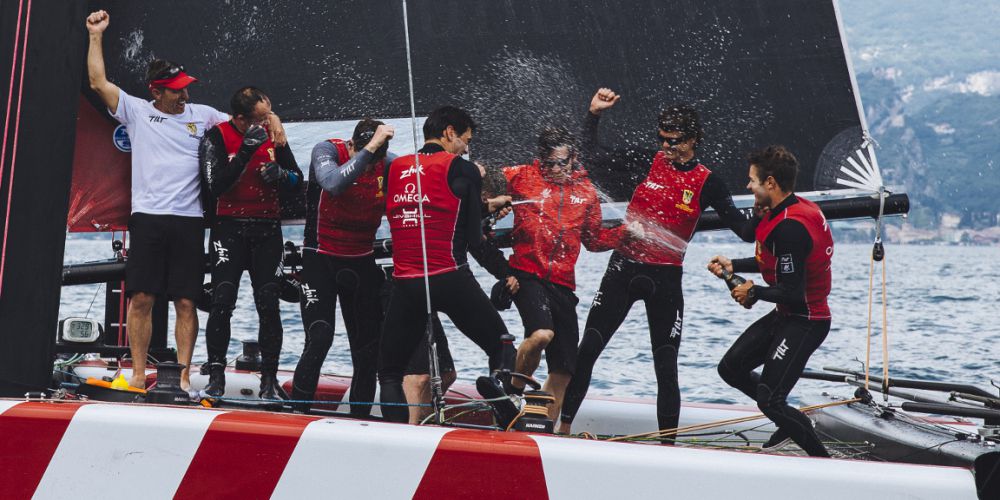 On Lake Garda today, the Schneiter family’s Team Tilt, managed by father Alex and steered by Olympic 49er sailor son Sébastien, was crowned first ever GC32 World Champion. Apart from a brief falter in today’s final race, the Swiss team over the last three days never finished a race lower than fourth, despite tricky conditions, a variety of race courses and wind strengths that Lake Garda threw at the 13 teams.

In the same year as they finished second overall on the GC32 Racing Tour in 2016, Sébastien Schneiter competed in the Rio 2016 Olympic Games and last year skippered the Swiss team in the Red Bull Youth America’s Cup. The young Team Tilt crew returned to GC32 sailing here with maturity.

“We had great team work – it worked really well on board – and short, but good preparation for this event,” explained Schneiter. “We definitely learned a lot from the Youth America’s Cup. Here we managed to sail fast while staying calm.”

Team Tilt’s performance was all the more remarkable following a disastrous opening day that left them lying 11th overall. “We were unlucky and we didn’t sail that well,” Schneiter admitted. “We knew we were much better than that – we were just keen to keep racing to improve our ranking.” Incredibly, the Swiss team turned this around in just one day, leading at the end of day two.

While this was Schneiter’s first World title, this was far from the case with tactician/mainsheet trimmer Glenn Ashby, winning skipper of Emirates Team New Zealand’s in last year’s America’s Cup for whom this is his 17th World Championship title, and his first in a crew larger than two. Ashby was previously part of the Team Tilt crew in 2016.

Team Tilt also claimed the ANONIMO Speed Challenge recording the highest average speed of 22.25 knots down the two reach/gybe course. This won them an Anonimo Nautilo GC32 Edition timepiece, to go with the Anonimo Nautilo Bi Color Bronze they claimed for their Championship victory.

On this final day, proceedings got underway early with one race held at 0830 in the northerly Peler before competitors were sent ashore to wait for the southerly Ora to build. After this three more races were held. Winning this morning’s race had put Jes Gram-Hansen and Rasmus Køstner’s SAP Extreme Sailing Team into the lead, but deep results in today’s last two races caused the Danish team to finish second by eight points. Oman Air completed the podium a further 11 points back.

Ernesto Bertarelli’s Alinghi had a mixed day but good enough to secure fourth, albeit tied on points with INEOS Rebels UK. Bertarelli was also the run-away leader in the Owner Driver Championship, finishing on 88 points to the 129 of Jason Carroll’s second placed Argo.

“I am pretty happy with the result considering the level of the class,” said Bertarelli. “There are some very good sailors behind me. Of course we would have liked to have made the podium, but the reality is that we haven’t sailed together enough. We did two days together in Oman in February before the start of the Extreme Sailing Series™ season and then a year before that in Oman – four days with the boat before we got here.”

Bertarelli praised the race committee for managing to get in 16 races and was proud that a Swiss team had claimed the title.

Frank Racing, jumping in the deep end at their first ever GC32 event in Europe, concluded the World Championship by winning today’s final race. “You’re only as good as your last race!” quipped owner-driver Simon Hull. “We have been going hot and cold all week. We are learning lot – we’d find ourselves in reasonable position at the top mark but then have some sort of faux pas that cost us. You only need one little one in this quality of fleet and you suddenly find yourself right at the back again.”

As to this GC32 World Championship generally, Hull said: “It has been a very steep learning curve for us, but what a great venue and great sailing. We are reasonably happy with where we’ve ended up. It would have been nice to have made less mistakes on the last day.”

Of this first GC32 World Championship, GC32 International Class President Simon Delzoppo, skipper of .film Racing said: “It has been fantastic. We have had a wonderful event. Seeing all the boats together – it has been a great competition with lots of races in varying conditions, light conditions and winds up to 18 knots. It has been fantastic to test all the crews out in different ranges that Garda has to offer. Team Tilt was very consistent – they fought back many times and were always near the lead. They did a fantastic job.”