Team Tilt on the ascent as Realteam leaps ahead After yesterday’s three way near-tie at the top, the GC32 Riva Cup has a stand-out leader going into its final day.

Team Tilt on the ascent as Realteam leaps ahead

After yesterday’s three way near-tie at the top, the GC32 Riva Cup has a stand-out leader going into its final day. Today Lake Garda was behaving, the southerly Ora wind a constant 15-18 knots, although this cut down tactical options and in all today’s four races it always seemed to pay to venture as close as one dared to the sheer vertical cliff face on the west side of the lake.

The Swiss Realteam, skippered by Jérôme Clerc, won today’s first race but as a result of her incredible consistency (in eight races she has scored five seconds), she has now pulled out a seven point lead.

This is the first time the Swiss team has led at the GC32 Racing Tour and their advantage tonight lines them up nicely to claim the GC32 Riva Cup tomorrow.

“Conditions were great and we put in a very good result in every race. We know that our boat is going very fast,” said Clerc. “Yesterday it was more about tactics. Today it was technique – flying, good manoeuvres and going fast all the time.” Realteam only joined the GC32 Racing Tour last year and missed the 2016 GC32 Riva Cup. Over the winter they benefitted from picking up several top crew from other teams like trimmer/tactician Lucien Cujean and trimmer Bryan Mettraux from Team Tilt and their ‘big guy’, bowman Christophe Carbonnieres from Team ENGIE.

“They have brought a lot,” admits Clerc. “Lucien and Brian were too old to do the Red Bull Youth America’s Cup so they have joined the ‘old’ team! It is great because they know a lot about the boat, the flying technique, the trim, etc. With this kind of boat if you want to get to the top quickly you need to have experienced guys.”

While Realteam will be hard to beat, even if the full schedule of racing is held tomorrow, Saturday’s ‘boat of the day’ was unquestionably another Swiss campaign, Team Tilt. Sébastien Schneiter’s team, which finished second on the 2016 GC32 Racing Tour was back on form today after a Friday they would prefer to forget. In fact following a second with three consecutive race wins today, their performance resembled that of Franck Cammas and NORAUTO, the immaculate overall 2016 winners. However even this outstanding performance has only elevated Team Tilt to second. 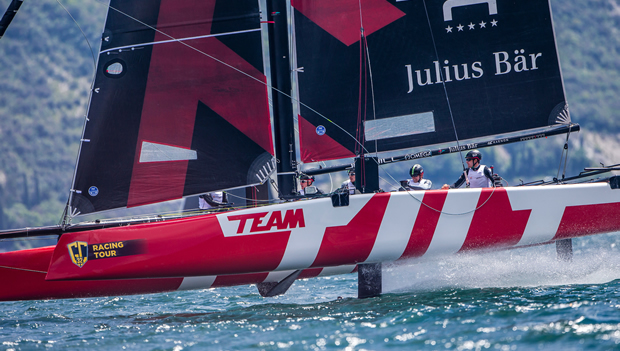 “Yesterday was a bit of a disaster for us,” admitted Schneiter. “Today we went for easier solutions at the gate and sailed like we used to sail. Even so, yesterday we learned a lot – we had a good debrief and today we were even better than usual.”

Schneiter felt they were sailing a lot better. “We made some really good manoeuvres, especially in the gybes. We were one of the few teams to do some foiling gybes. We made a lot of gains there.”

With two former Team Tilt sailors on Realteam, including Lucien Cujean, his Olympic 49er crew, Schneiter was pleased that some of his friends are leading overall, despite the two teams spending much of the day hounding each other with various protests behind hurled between the boats – although none stood up.

Team Tilt was deemed to be the innocent party in a collision for a second consecutive day. Yesterday’s incident resulted in Pierre Casiraghi’s Malizia – Yacht Club de Monaco receiving two penalty points. Today it was Team ENGIE’s turn to lose out. Having led going into today, this penalty for Team ENGIE came in addition to their hooking a semi-submerged line in today’s third race, spinning them into a crash tack. The French team has now dropped to third overall.

Elsewhere Team Argo had a disappointing day today but continues to lead the owner-driver championship while Team Tilt is ahead among the crews bound for next month’s Red Bull Youth America’s Cup in Bermuda. Sadly Team BDA fortunes didn’t go so well today after they experienced a capsize while they were not racing. Fortunately they were quickly righted with the generous help of the Argo’s experienced support crew and the US team’s big black tender.

Two rounds of the ANONIMO Speed Challenge were sailed today but neither succeeded in surpassing Flavio Marazzi and ARMIN STROM Sailing Team’s supersonic speed of 31.02 knots recorded yesterday. Today’s fastest time was that of Realteam, which managed 28.44 knots in the second round while Team ENGIE recorded 27.07 in today’s first. Two more rounds of the ANONIMO Speed Challenge are scheduled for tomorrow, along with another four races – conditions permitting.