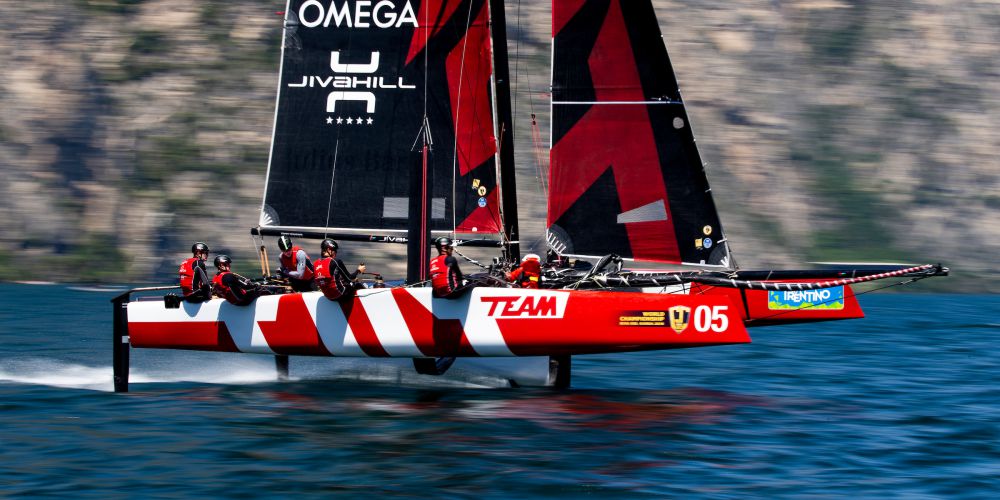 Team Tilt soars into the lead at GC32 World Championship

Star performer was Sebastien Schneiter’s Team Tilt. Yesterday they would rather forget when they were pronounced OCS in race one, but today they never finished lower than fourth. The 11 points they scored today compares with the 19 points of their nearest rival. 11th overall this morning, Team Tilt now leads, albeit on countback from Oman Air.

“Today was what we came here for – classic sea breeze, flat water and good foiling action,” said a beaming Sebastien Schneiter. “After yesterday’s performance I am surprised to be ahead, but there is still a long way to go.”

All five races today had reaching starts, the 13 GC32s then converging at the reaching mark, like the first corner in Formula 1.

Team Tilt won today’s first and third races. “The first was really good for the team – it showed we were back in the game and we regained our confidence. After that we stayed on top form, so I am really happy with our performance,” observed Schneiter.

Oman Air was almost as consistent, never scoring lower than sixth and winning the fourth race after they had rolled Team Tilt down the first run. The team are striving to top the podium in the next few days, determined to improve on today’s result – mainsheet trimmer Pete Greenhalgh commented on their performance: “In the first race we were second comfortably and flew too high and the rudders came out of the water and did it again about 40 seconds later and went from second comfortably to eighth! Then we OCSed in a race where we didn’t need to push it at all. But everyone made mistakes today and left points out there.”

Earlier in the day, stand-out performer had been Jes Gram-Hansen and Rasmus Køstner’s SAP Extreme Sailing Team. After today’s first three races they held a commanding six point lead. This was followed by some expletives in the fourth. As Kiwi helmsman Adam Minopio explained: “Coming into the bottom mark, we snapped our furling line so we had to mongrel drop the Code 0 while trying to sail upwind. It was so slow we ended up last – but that is yacht racing. We’ll double check the boat tonight so we can finish the last two days without damage and hopefully be more consistent.”

As a sailing day, Minoprio enthused: “It was beautiful. The wind was great, there was great sailing, foiling downwind and a bit of foiling upwind. I hope there’s more breeze tomorrow. The faster it is, the more fun it is on these boats.” Downwind the GC32s were hitting 33-4 knots today in 17-18 knots of wind.

After an up and down event to date, Franck Cammas and NORAUTO finally won the last race. By this time, Garda’s typically ‘favoured right’ was paying and after rounding the reaching mark NORAUTO was the only boat to gybe immediately. “That worked well and it was very easy from then,” said Cammas, whose team lies seventh.

Unfortunately the French team had suffered an incident in the second race when they were forced by a competitor into a mark, which they duly ensnared, caused them to finish last. “We lost so many points today – something like 15: That is a pity,” said Cammas.

Stand out leader in the GC32 World Championship’s Owner Driver Trophy is Ernesto Bertarelli’s Alinghi. The Extreme Sailing Series™ overall leader is lying third overall, one point from first, but holds a mighty 23 point lead in the Owner Driver ranking, despite Bertarelli having not personally raced his GC32 in over a year (although in the interim he has been busy racing other catamarans – Alinghi dominated last year’s D35 Trophy, winning all but one of the eight event series on Lake Geneva). Today Alinghi also recorded the fastest time in the ANONIMO Speed Challenge.

How has he found making the transition back to the foiling GC32? “It is fairly similar – once you get over the fact that you are not touching the water,” said the two time America’s Cup victor. “At the helm the modes are pretty similar, the boat responds pretty much the same. The only difference is at the bottom mark, when you arrive at considerable speed, there is something we don’t experience in the D35 which is the gravitational pull, the G-force you feel when you throw the boat into a strong turn.”

Conditions are looking equally good tomorrow when racing is scheduled to start at 1230 CEST.