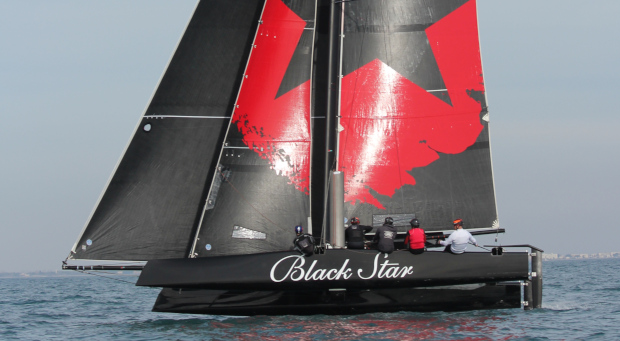 Joining the circuit for 2019 will be a new Swiss campaign in Black Star Sailing Team. This has been masterminded by former A-Class catamaran sailor Christian Zuerrer with the assistance of former Armin Strom Sailing Team skipper and renowned Olympic Star sailor Flavio Marazzi.

Zuerrer is getting back into sailing after a hiatus for a few years. “I was looking around at what were good opportunities for a multihull sailor and the only boat I found that was suitable was the GC32,” he says. A trial run on the flying catamaran last year was enough to get him hooked again.

For this season Zuerrer has chartered the GC32 of Marazzi, who will be helming while Zuerrer calls tactics and trims the mainsail. They are joined on board by Florian Trüb, who is part of Alex and Sébastien Schneiter’s Team Tilt squad and Adam Kay and Will Alloway, who campaigned INEOS Rebels on the Extreme Sailing Series’ last GC32 season in 2018. Coaching the team is Andrew Walsh.