Three boats within a point of the lead after tricky opening day The 2017 GC32 Racing Tour got off to an exceptional start today with four races completed, one round of the new ANONIMO Speed Challenge and a leaderboard with the top three boats separated by one point. 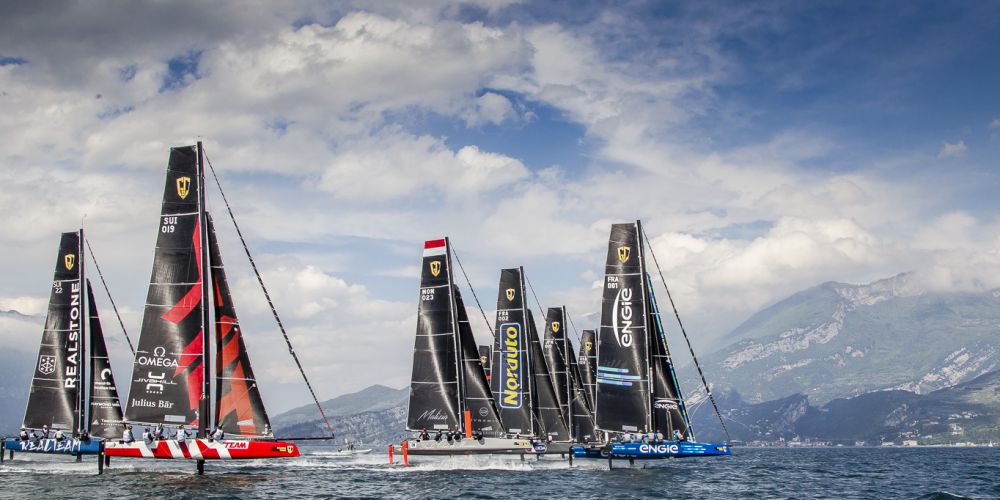 The 2017 GC32 Racing Tour got off to an exceptional start today with four races completed, one round of the new ANONIMO Speed Challenge and a leaderboard with the top three boats separated by one point. This was despite Lake Garda being in fickle mood with the wind typically 10-15 knots, occasionally gusting more but also dropping off in the middle of the day.

Spanish double Olympic medallist Iker Martinez once again proved that 49er sailors can make the best foiling catamaran sailors, winning today’s opening race – his first ever race in a GC32. Following with a 2-6, Martinez’s I’M Racing Movistar was leading going into the last race, only for a broken block and some bad luck to finish the day with a 10th, them to fifth overall.

“We need to learn a bit more to get used to it and then we’ll have more fun,” said Martinez, adding that they were struggling for speed when it got lighter. “At the moment we can’t do what we want. As soon as we understand more about the light breeze, then it will be good. It was a great first day – now we know how we stand.” 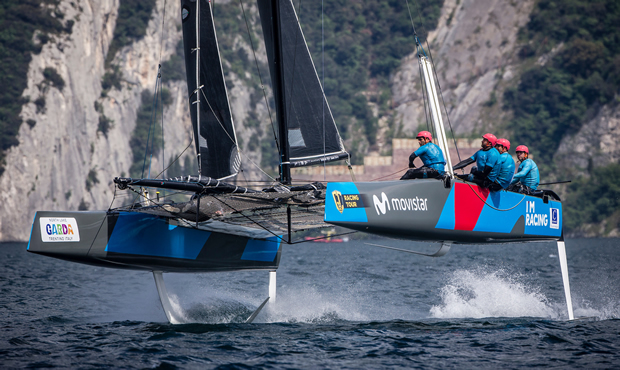 It was another first for Team ENGIE today, ending the day tied with Realteam, but leading overall by winning today’s fourth and final race. French skipper Sebastien Rogues was delighted: “We had a beautiful day. The feeling with Team ENGIE is very good, very fast. This is the first time we have led the GC32 Racing Tour which is nice.” Rogues attribute their success to their winter training in Oman and the crew was performing well especially mainsheet/tactician Gurvan Bontemps. “But this is just the first day and tomorrow it might be more windy.”

Compared to last season’s performance, Realteam is also performing well, also the first time they have topped the GC32 Racing Tour leaderboard. They didn’t win a race today but put in three seconds.

“It was great to sail after two days off,” said skipper Jerome Clerc. “We were really happy to get sailing. The fleet is very close and you have to fight hard to be at the front of the fleet.” Realteam, perhaps more than any other made great use of the usual Lake Garda tactics of heading straight into the sheer cliff face on the western shore. “It was tricky – it was never over. You could lose everything even on the last leg. It was hard on the nerve.” 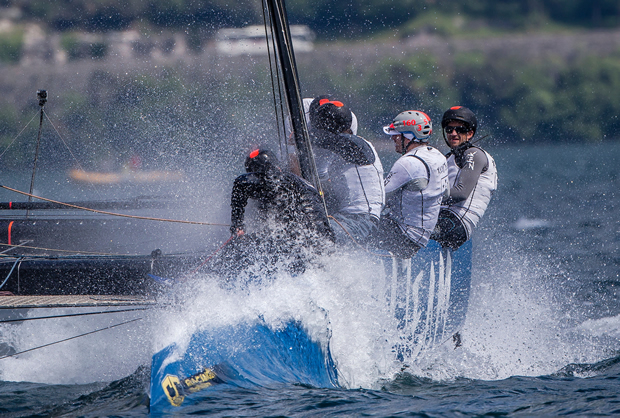 Realteam came close to winning the third race only to pick up a penalty at the final mark rounding when on the water jury felt they had fouled ARMIN STROM Sailing Team. As they completed their penalty turn, their compatriots passed them to take the bullet. “The umpires thought they were too close,” remarked ARMIN STROM Sailing Team skipper Flavio Marazzi. “It was good for us.”

ARMIN STROM Sailing Team also came out on top of the first ever ANONIMO Speed Challenge, where the boats completed two reaches and a gybe at the reach mark over a course today of 1.06nm. ARMIN STROM’s average speed was 31.02 knots. All the teams have the chance to better this over the next two days – the team ending the GC32 Riva Cup with the fastest speed winning an ANONIMO Nautilo watch.

Leading the field going into the final race was Team Argo of American Jason Carroll. However a sixth in this dropped them to third overall, albeit just one point off the lead. “It was one of those days where it was very chutes and ladders and you only know when the coach comes alongside how it is shaking out,” admitted main trimmer Anthony Kotoun. “We had one good start. It is easy days when you get out of front, especially on this race track where you can control the mode into the wall [ie the cliff face].”

Team ARGO won today’s second race which Kotoun put down to a good start and a good layline call into the leeward gate by British tactician Alister Richardson. Carroll’s team is the current leader of the Owner-Driver ranking at the GC32 Riva Cup.

Tomorrow the plan is to run two races, two rounds of the ANONIMO Speed Challenge followed by two more races, with a start time of 1300 CET.