Tough competition expected for 10 boat fleet at GC32 Lagos Cup When racing kicks off tomorrow (Thursday 23rd) on Portugal’s Algarve at the GC32 Lagos Cup, the flying catamaran fleet will be back up to its full pre-pandemic size of ten boats. As reported, new additions for this second event of the 2022 GC32 Racing Tour will include the return of past GC32 World Champions Team Tilt, […]

When racing kicks off tomorrow (Thursday 23rd) on Portugal’s Algarve at the GC32 Lagos Cup, the flying catamaran fleet will be back up to its full pre-pandemic size of ten boats. As reported, new additions for this second event of the 2022 GC32 Racing Tour will include the return of past GC32 World Champions Team Tilt, skippered by Sébastien Schneiter, plus two other teams from SailGP, who are new to the GC32 Racing Tour – Team Canada and K-Challenge Team France. Also competing is a new owner-driver team, and the first from eastern Europe, in Piotr Harasimowicz’s HRM Racing. The new Polish team will face stiff competition from Erik Maris’ Zoulou and Simon Delzoppo’s .film AUS Racing on the GC32 Racing Tour’s Owner-Driver Championship.

The GC32 Lagos Cup is effectively the ‘pre-Worlds’, building up to the pinnacle event of the season, the GC32 World Championship which will take place here over 13-17 July.

At the first event of the season in Riva del Garda, Ernesto Bertarelli’s America’s Cup challengers on Alinghi Red Bull Racing – SUI 8 put in a supreme performance winning by 21 points with a race to spare. However for the GC32 Lagos Cup, skipper Arnaud Psarofaghis and Maxime Bachelin, skipper of Alinghi Red Bull Racing – SUI 15 are swapping boats.

As Psarofaghis explains: “For me it is really good, because I can learn to sail with new people. I have sailed in the past with one or two of them, but not the full line-up.” For Bachelin “it is very interesting for me to sail with the ‘old guys’ who have seven years of GC32 experience. The other team will get to sail with Arnaud, who will have a lot of input.” Of his ‘new’ crew Bachelin adds: “Most challenging is how to coordinate things, because it is not the same as on the other boat, ie how to trim the main and the steering, etc. But they give me a lot of input and I am trying to bridge the gap with Arnaud.”

As to Lagos – Psarofaghis knows it well and in fact holds a 100% win rate here: “It is always great. It can be tricky, because it is quite shifty with an offshore breeze, but that makes the game interesting. As we saw in our two days of practice – big gains can be made, so even if you are leading, you have to control the fleet.” 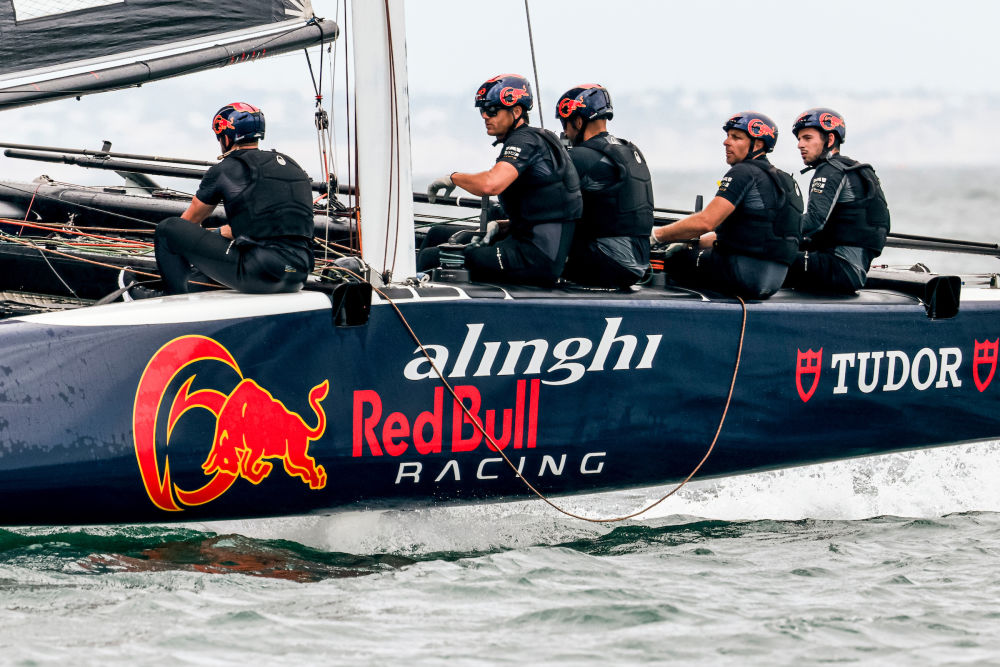 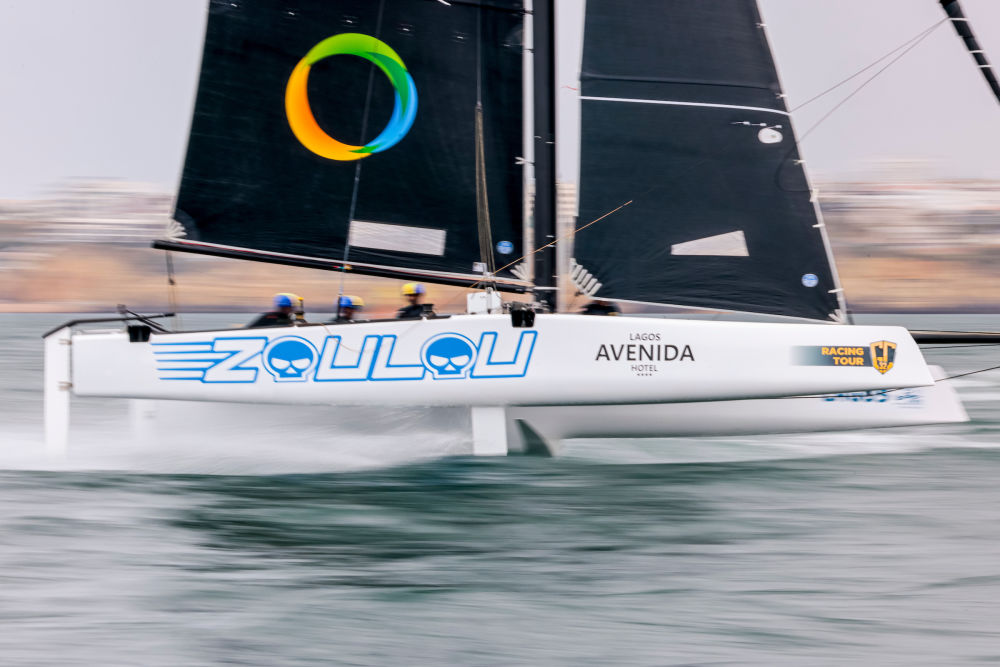 Team Rockwool Racing finished second in Riva del Garda last month where, out of 18 races, they finished on the podium in 11. Like the three other SailGP teams competing here (K-Challenge Team France, Team Canada and Team Tilt), they are coming in hot from Chicago where they finished fifth. Of the fresh influx, skipper Nicolai Sehested says: “It is great – luckily all of the teams joining have raced the GC32 before, so they will be at a high level from the beginning and can push to the limit.”

The past GC32 World Champions, Team Tilt, will be the one to watch, he advises, although they have a new crew line-up. “But Alinghi Red Bull Racing is the one we are still trying to chase. They have done it for so long, whereas we have only done it for a year, so as long as our learning curve remains steeper than theirs then we are getting closer. We were taking some races off them in Lake Garda, although we had a few boat issues…”

Third in Riva del Garda was Christian Zuerrer’s Black Star Sailing Team, which is hoping to claw its way up the podium in Lagos, a venue which Zuerrer says his team enjoys and knows well: “It is a great venue. We had good training week here in March and had a couple of good days this week, so I am looking forward to a beautiful event here. It is great to have ten teams – back to 2019 levels. There will be some tough guys from SailGP joining us and it will be interesting how we can manage the fleet now. There are more professionals sailors, so the battle will start again.”

On the rise will also be .film AUS Racing of GC32 Class President Simon Delzoppo, who last completed a full season with the GC32 Racing Tour in 2018 and has returned this year. “Our confidence is rising,” says Delzoppo. “It is about improving and being competitive and building up to the Worlds. We have a fair way to go. We were getting competitive in Garda, but we are hoping for better results here. The crew are all very experienced guys who have spent a lot of time in the GC32 which makes it easy for our team to improve.”

As Class President, Delzoppo adds: “Having 10 boats again is amazing – it makes for a busy start line and a great spectacle. It is excellent for the Class. There are some really professional teams. It shows the popularity of the GC32, the Class and the professionalism with which the circuit is run. The guys really enjoy sailing these boats – it is ‘real’ sailing, with people pulling ropes and cranking winches. Plus as an owner you don’t have to spend as much time and money on it as some other boats.”

The GC32 Lagos Cup is supported by the City of Lagos and Tourism Portugal, plus Sopromar, Marina de Lagos and Clube de Vela de Lagos.

Racing starts at 1300 tomorrow and runs until Sunday with up to five races scheduled each day.