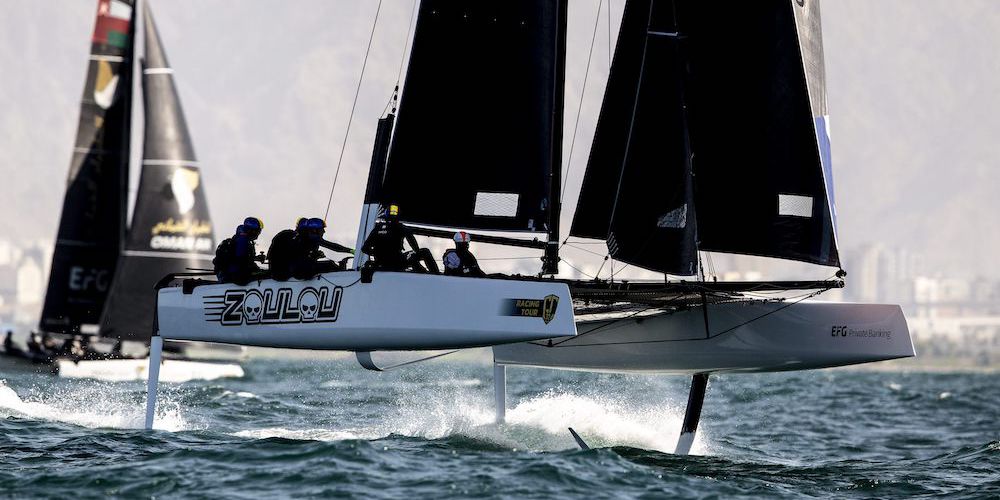 While the forecast indicated conditions might be light and lake-like for a second day, in fact the breeze for day two of the GC32 Oman Cup was just that vital couple of knots more, allowing the catamarans to fly fully, were it not for the unusually large sea state running off Muscat’s shore. These once in a year conditions proved challenging for the crews as they tried to find new ways to get the best from their boats.

Undisputed winner of the day was Zoulou, which, with French ace Gurvan Bontemps standing in on the helm for owner-driver Erik Maris (who arrives tonight and will take over tomorrow), put in a 1-2-2-2-1 scoreline, that was impressively consistent given the sea state and gusty conditions.

“It was not easy on the technical side, but we managed to find the key,” said the French team’s tactician Thomas le Breton. “It is not every day we sail in waves like that and in not so much wind. We were a bit worried to start with. We tried everything and to be honest I’m not sure what worked! We tried to do things simply, with simply trajectories and manoeuvres. It was important to stay in good pressure and we managed to find a good balance between the pressure and shift.”

Their performance propelled Zoulou up to second on the GC32 Oman Cup leaderboard, now just a point behind Alinghi. The Swiss World Champions had a reasonable day, winning the third and fourth races, but were hampered by a pre-start incident in race three.

Throughout the day Oman Air had been hounding their arch rivals, as at stake is the 2019 GC32 Racing Tour title. Since the two teams started this event tied on points, it is a case of whoever wins here will collect the big prize on Saturday. However prior to the gun in race three it all got too close and in a classic match race manoeuvre down by the pin, Alinghi on port failed to keep of Oman Air on starboard. At a post-race hearing, the jury deemed that both boats had broken RRS 14 having failed to avoid contact. Because Alinghi had been in the wrong they were penalised two points, while Oman Air was docked one.

However the incident left Alinghi holed on her port side and this evening she is out of the water being repaired. “It is not a huge hole but we have to fix it,” explained Alinghi’s Yves Detrey. “We’ll have to replace the inner skin and put some foam in. It’ll look nice for tomorrow.”

Even the immaculate Alinghi found today’s conditions challenging. “It took us a bit of time to read the waves, especially downwind, but I think we did okay and had good boat speed upwind and down,” continued Detrey. “It is a lot about handling and the helming and making sure we don’t run after each other trimming the sails because the waves make it so complicated already, so we have to stabilise the trim and work together with Arnaud [Psarofaghis, helmsman].” 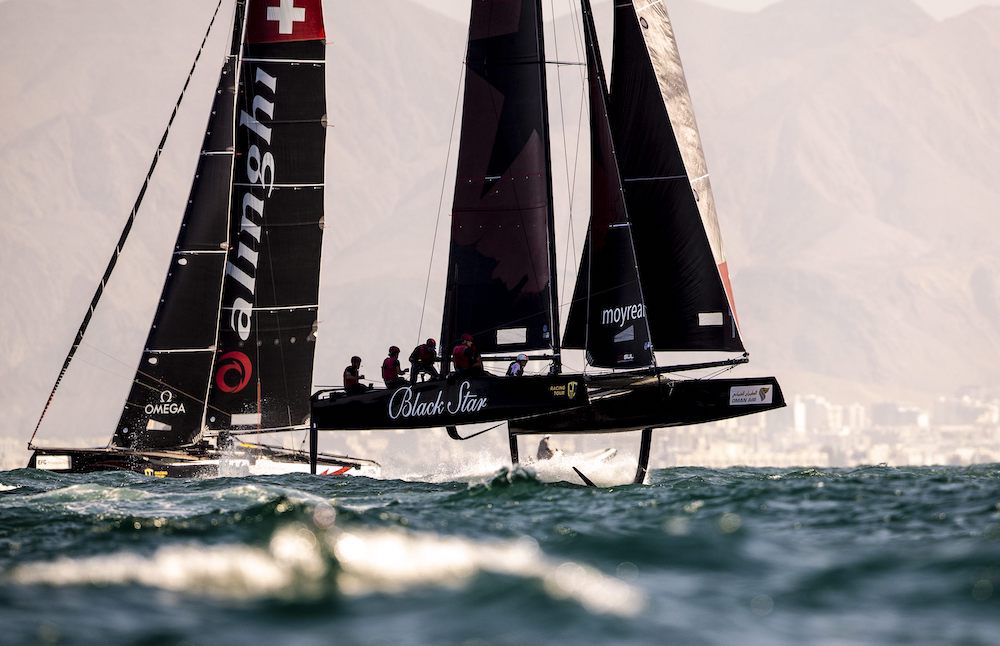 Above: Black Star Sailing Team is now mixing it up with the big boys. Below: Throughout the day Oman Air had been hounding their arch rivals Alinghi. Photo: Sailing Energy / GC32 Racing Tour.

Red Bull Sailing Team had up and down day, second in the first race and winning the second, which left them third overall, albeit eight points adrift of Zoulou. “It was pretty bumpy today with huge waves compared to the wind strength– that made it tricky to sail downwind,” said helmsman Roman Hagara. “The problem was steering and keeping it flying and the gusts were very up and down, so it was pretty hard pressure-wise also.” In the last three races Hagara admitted that their approaches to the leeward gate could have been better. “We lost everything there.”

The 2019 GC32 Racing Tour newbie Black Star Sailing Team is now mixing it up with the big boys. In two races today they led around the top mark, only to lose their advantage. “It was a great day, great sailing. We have really improved a lot,” said Christian Zuerrer. “We struggled in the first two races with the waves, especially downwind. There was more wind than we expected but otherwise it was a perfect day’s sailing out there.”

Sadly Alinghi is not the only GC32 out of the water tonight. Shortly before race three, in a first of its kind incident, the ‘spine’ (the fore and aft strut running between the cross beams) broke on board Argo and this evening the US team was investigating ways of finding a replacement part or effecting a repair.

Conditions are forecast to be similar tomorrow with a start time once again at 1300 local time.