10+ teams to compete on the 2016 GC32 Racing Tour The 2016 line-up includes a mix of return customers and new faces such as Volvo Ocean Race winner Franck Cammas aboard NORAUTO Racing, Gunvor Sailing and, from the D35 circuit, Team Tilt and Realteam

At least 10 teams are set to contest the 2016 GC32 Racing Tour, for this, the third season of foil-born racing for the flying GC32 catamarans.

As GC32 class founder Laurent Lenne puts it: “Racing courses with reaching starts and finishes, on foiling catamarans, with more than ten boats competing – how cool is that? It has never been done before.”

The sizeable fleet includes a mix of keen, enthusiastic amateurs and professionals. They are drawn to the GC32 Racing Tour due to the compelling cocktail it offers: The chance to race ultra-high performance, equally-matched one design foiling catamarans that are affordable and logistically simple to run, in venues that are relatively close together in southern Europe, and which, importantly, have been chosen for their regular winds in order to provide the best possible foiling experience for their GC32 catamarans.

The 2016 fleet includes a mix of return customers and new faces. 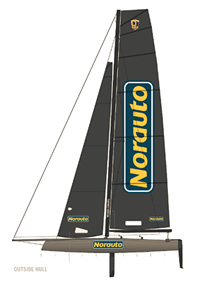 The GC32 Racing Tour welcomes French Volvo Ocean Race winner Franck Cammas and his NORAUTO Racing campaign. While Cammas is new to the GC32 Racing Tour, he is far from new to the GC32. In fact, in preparation for his International C-Class Catamaran Championship victory in 2013, Cammas, along with GC32 designer Martin Fischer, developed an 18ft foiling catamaran, which became the test bed for the GC32. Cammas will sail with some of the best French multihull sailors and with youth sailors from the Team France Academy, whose goal is to develop sailors who can compete in crewed racing at the highest level internationally.

Also making its debut on the GC32 Racing Tour is Gunvor Sailing, backed by the Geneva-based commodity trading group, who’s CEO is Torbjörn Törnqvist. The crew of Gunvor Sailing has yet to be confirmed, but will comprise young Swedish sailors with guest appearances from notable sailors such as London 2012 Olympic 49er gold medallist Nathan Outteridge and Francesco Bruni (Gunvor also supports other youth development programs in Sweden, like ice hockey with AIK Hockey).

Switzerland has a long history in multihull racing, where every year hot competition takes place on Lake Geneva in D35 catamarans. Two of the top teams from this join the GC32 Racing Tour in 2016, including the reigning D35 champion, Alex Schneiter’s Team Tilt. Skippered by Schneiter’s Olympic 49er sailor son, Sébastien, Team Tilt is gunning for the Red Bull Youth America’s Cup. Significantly, their crew is being bolstered this season by the addition of two eminent sailors from Emirates Team New Zealand: skipper and multiple A-Class World Champion, Glenn Ashby, and Ray Davies, considered one of the world’s top tacticians.

Realteam, skippered by Jérôme Clerc, finished the 2015 D35 Championship in fifth place, but won the championship in 2012, when Realteam was also first home in the prestigious Bol d’Or Mirabaud, Switzerland’s premier race. As a group led by skipper Jérôme Clerc, Realteam has been competing for a decade and has also competed internationally on the Extreme Sailing Series, where its top result was third overall in 2014.

Five teams are set to return in 2016. Of these the highest placed finisher in 2015 was the Yann Guichard-skippered Spindrift racing, which was a close third. This year Brittany-based Spindrift racing has one of the busiest schedules of any professional sailing team, also competing on the World Match Racing Tour and the D35 circuit, while also campaigning Spindrift 2, the world’s largest and fastest offshore race boat.

From nearby in France is Team ENGIE, skippered by Sébastien Rogues. With a background racing offshore in monohulls, Rogues last year had to make the biggest transition of all the skippers taking part. This year he is supported by several top multihull sailors, including F18 and foiling catamaran ace Gurvan Bontemps.

From the USA is Argo, of two time Melges 32 World Champion, Jason Carroll. Having dipped his toe in the GC32 Racing Tour last season in Cowes, Carroll will be sailing more of the circuit in 2016 and is importing more top foiling experience into his team: In addition to Moth ace Anthony Kotoun he has recruited powerful British talent in Peter Greenhalgh (who won the GC32 tour last year with Sultanate of Oman) and former Luna Rossa sailor and Extreme Sailing Series champion, Alister Richardson.

Longest standing GC32 campaigner is President of the GC32 International Class Association, Swiss former Olympic Star sailor Flavio Marazzi and his ARMIN STROM Sailing Team. Uruguayan jib trimmer Diego Stefani is back on board and for this season Marazzi will be sailing with leading New Zealand Olympic and offshore sailor Sharon Ferris-Choat – the only woman competing on the circuit.

Having a similar tenure in the class as Marazzi is GC32 founder, Amsterdam-based French businessman Laurent Lenne, After finding himself often watching from the sidelines over the last seasons, finally this year Lenne is getting to mount his own campaign, Team Umpirex. “After four years of hard work pushing the GC32, I am excited to return to the water to race the coolest and most exiting class in the world,” he says.

At least two more teams have signed up to join the circuit over the course of this season and will be announced shortly.

GC32 Class President, Flavio Marazzi, observes: “The GC32 International Class Association is very proud of the positive growth of the class: The Extreme Sailing Series will start its worldwide tour in March with eight teams on their new GC32s, while in Europe, the GC32 Racing Tour will have at least 10 boats on the starting line. We are looking forward to a great mix of ambitious owner-drivers and professionally-driven boats crewed by America’s Cup sailors, Olympic medallists and World Champions. We strongly believe this mix will provide one of the most fascinating One-Design racing circuits at the moment.

“The GC32 has definitely stepped out of its baby shoes and is providing the most fun, high-speed and adrenaline One-Design sailboat racing on the planet. Come and join us!” 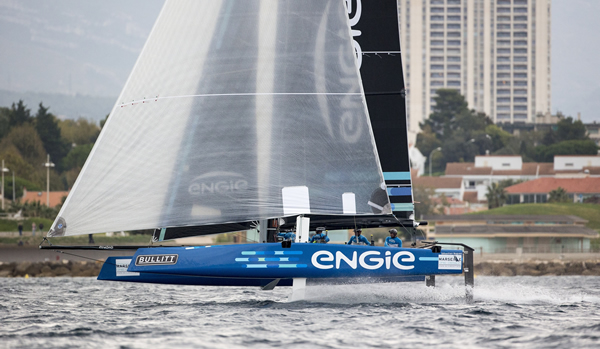 Jason Carroll (USA), skipper Argo: “The GC32 is going to be Team Argo’s racing focus this summer, and we’re really excited to race in some of our favourite European venues. We absolutely expect to take our knocks – this is a very experienced fleet and a boat that demands a lot of practice. But the fastest way to improve is to race against the best.”

Yann Guichard (FRA), skipper Spindrift racing: “Even if it is a one design, the GC32 is at the forefront of technology and demands scrupulous preparation from its participants, which is very stimulating for our team. In sports terms, we want to continue to make progress on these particularly demanding flying boats. For these reasons, the GC32 Racing Tour is a very good platform for Spindrift racing.”

Jérôme Clerc (SUI), Realteam: “Realteam wanted to go flying, so I think the GC32 is the best boat to do that right now. The GC32 Racing Tour will have fantastic racing with around 11 boats, in good, windy venues. It will be great fun, but we need to learn a lot about the boat – that is why we have a three year plan in which to try and win the circuit.

“There are some very good teams and the level will be very high. The other teams are more experienced than us. Some have already sailed on the boat for two years, so it will be tough for us to reach a high enough level to compete against these teams.”

Laurent Lenne (FRA), Team Umpirex: “We have a lot of work to do, because although we have a lot of knowledge of the product, customers have taken priority – so our boat will have a relatively late delivery and with the creation of a new team, we will probably, of all the sailors, be the ones with the least racing hours. Nevertheless, my ambition is strong as I believe that the GC32 is not about an individual’s skills, but about team coordination. So I think we have a shot and there are a lot of new teams.

“Let’s not forget that aside from the racing, we are planning to enjoy the beautiful sailing spots we will be going to.”

Sébastien Rogues (FRA), Team ENGIE: “We are preparing for a year building on our experience from 2015 that served us well and has helped us optimise the Team ENGIE boat. I have a great team that is very motivated to sail at an exceedingly high level since most are preparing for the America’s Cup. In short we’re very motivating and ready to go.

“We are very excited to go sailing and are really looking forward to participating in the first event. We will do our best. I am very proud to be the skipper of the Team ENGIE.”

Alex Schneiter (SUI), Team Tilt: “It is clear to us that sailing is moving towards foiling – it is the natural evolution. I think foiling is great.

“For me the GC32 Racing Tour is very attractive. The venues are excellent for sailing, like Lake Garda and Palma. In 2016 we know that we are new to the GC32, so we’ll be coming in quite humbly.

“The GC32 will be also a great platform for the youth of Team Tilt to train ahead of the next Red Bull Youth America’s Cup, which will take place in Bermuda on the AC45 foiling catamarans in 2017”.

Franck Cammas, skipper NORAUTO Racing: “With Norauto Racing, we’ll be at every event of the circuit. GC32s are foiling boats that we are training on all year long. They offer a great opportunity to improve more and more and give a chance to the young sailors of Team France Academy managed by Louis Viat, to race against top sailors in great competition.”

Seth Thomas Pietras, spokesman for Gunvor: “Gunvor Sailing is entering the GC32 circuit to train a Swedish youth team with an eye on the Red Bull Youth America’s Cup. We expect appearances, as well as coaching, from notable individual sailors from time to time, including the likes of Nathan Outteridge and Francesco Bruni…that is if the youth team is lucky!” 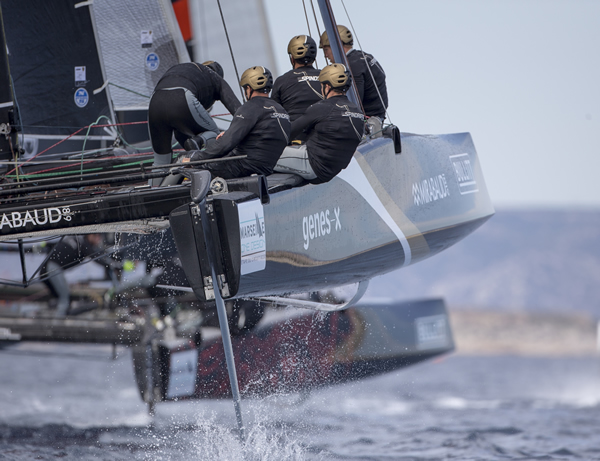