Third consecutive GC32 Racing Tour overall victory for Swiss team Appropriately, given it is the longest-standing and most successful catamaran racing team on the planet, Alinghi Red Bull Racing has been confirmed as the 2022 winner of the GC32 Racing Tour. This continues the success of Ernesto Bertarelli’s team, which also won the last two editions of the World Sailing-approved flying catamaran one design circuit […] 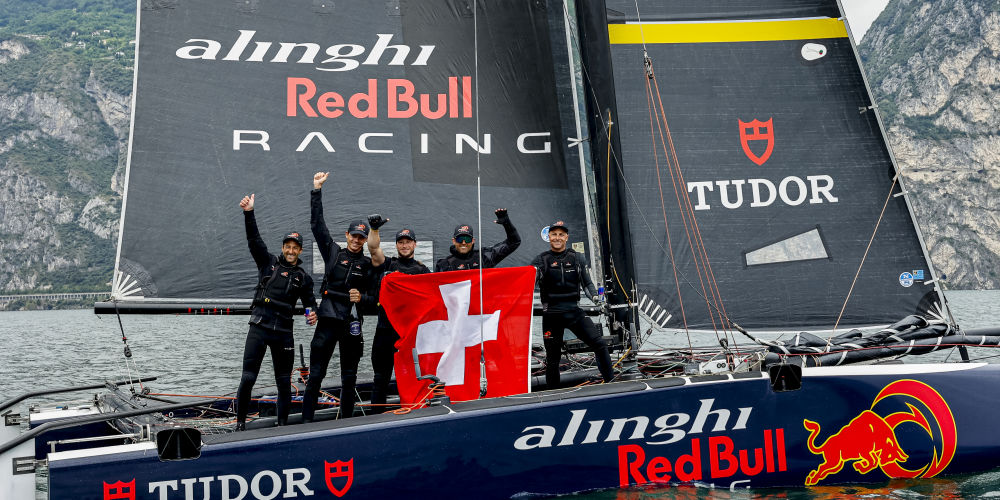 Appropriately, given it is the longest-standing and most successful catamaran racing team on the planet, Alinghi Red Bull Racing has been confirmed as the 2022 winner of the GC32 Racing Tour. This continues the success of Ernesto Bertarelli’s team, which also won the last two editions of the World Sailing-approved flying catamaran one design circuit in 2021 and on its first participation in 2019. (The GC32 Racing Tour did not take place in 2020 due to the pandemic).

While this season Ernesto Bertarelli’s team has been largely focused on its challenge for the 37th America’s Cup in Barcelona in 2024, its continued participation on the GC32 Racing Tour has been no less effective. For their latest challenge, the Alinghi team merged with Red Bull and for 2022, the new Alinghi Red Bull Racing initially fielded two teams for the GC32 Racing Tour. 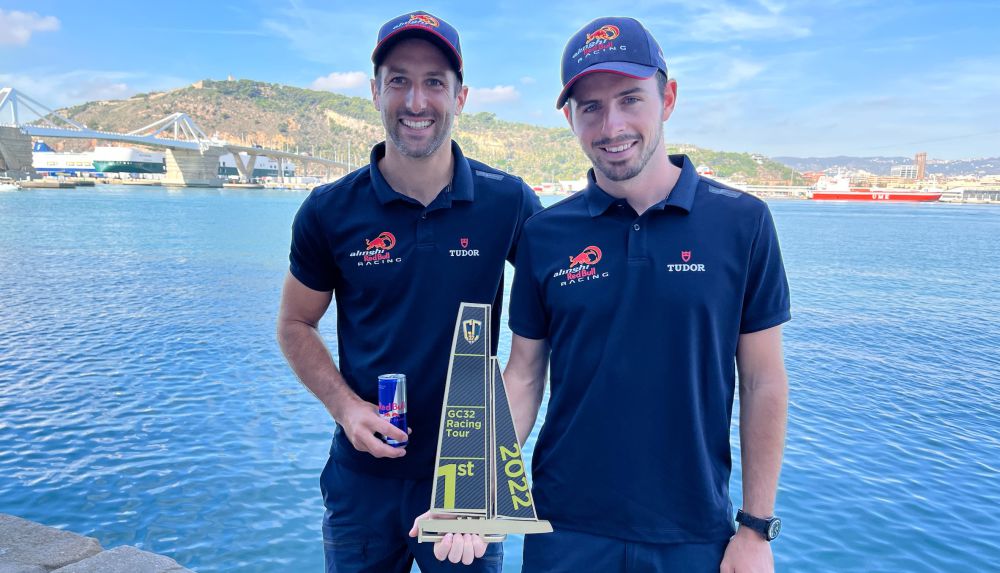 In late May, the Swiss team started out with a huge victory at the GC32 Riva Cup on Lake Garda where Alinghi Red Bull Racing – SUI 8, their familiar championship-winning team led by helmsman Arnaud Psarofaghis, won by 21 points, incredibly with two races to spare. Their second crew of young Swiss sailors under skipper Maxime Bachelin aboard Alinghi Red Bull Racing – SUI 8 came home fourth – a most promising result on their first GC32 Racing Tour outing.

For the GC32 Lagos Cup at the end of June, the effective GC32 ‘pre-Worlds’, the two Alinghi Red Bull Racing crews swapped helms. In the event’s brisk, flat water conditions, again it was Psarofaghis that prevailed, this time sailing with the team’s development crew and this time winning by a slightly smaller margin – 10 points ahead of the Nicolai Sehested-steered Team Rockwool Racing. Alinghi Red Bull Racing – SUI 8 came home fourth. 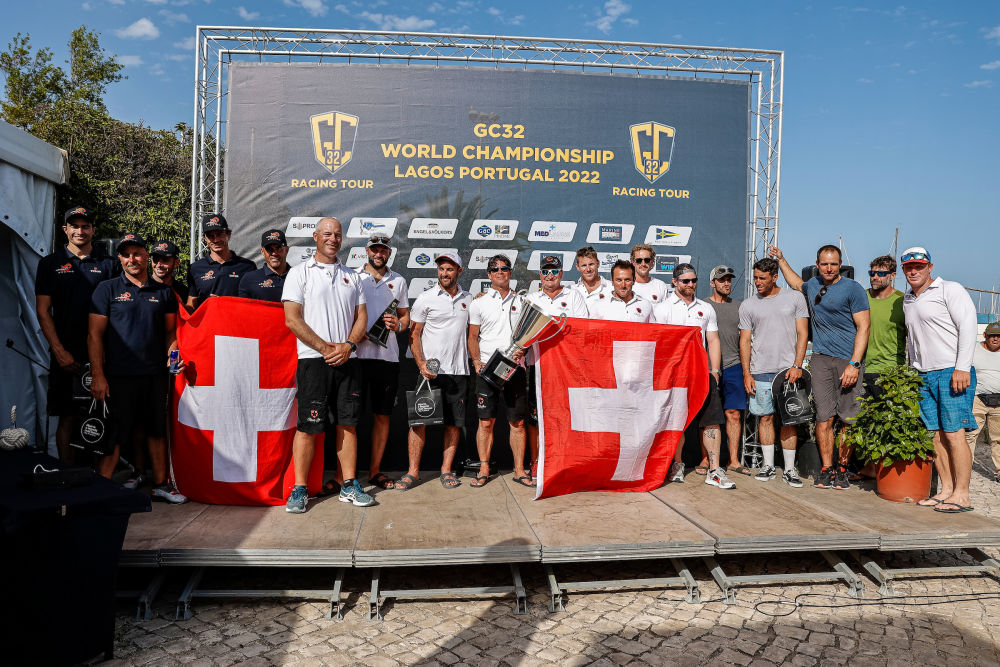 At the end of this 2022 season, the GC32 Racing Tour’s ninth, the overall results could not have been closer with Alinghi Red Bull Racing – SUI 8 winning from Black Star Sailing Team and Team Rockwool Racing, tied just one point behind. 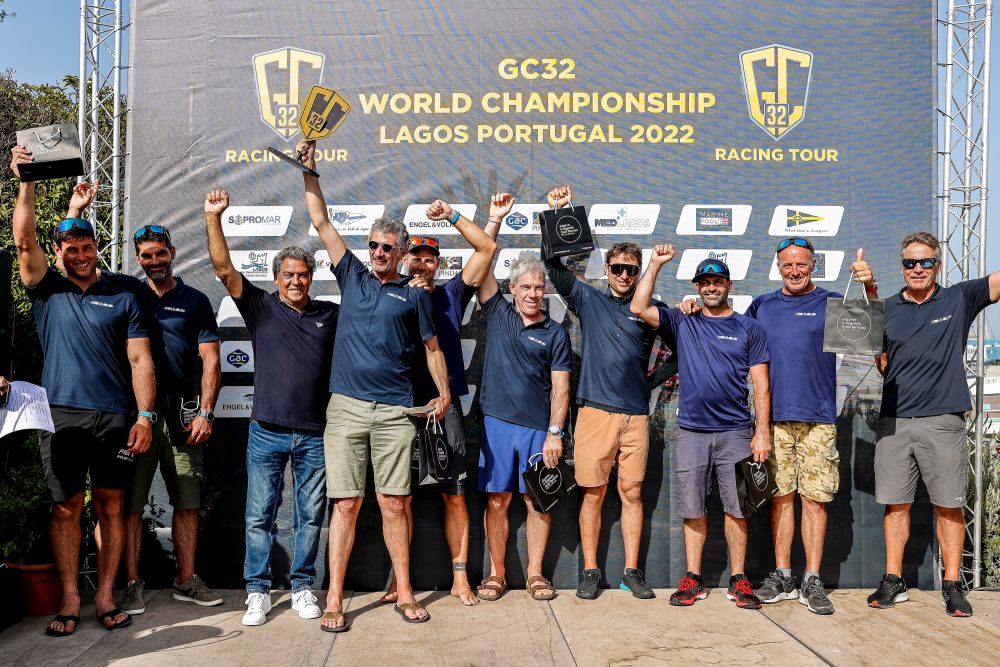 Of Alinghi Red Bull Racing’s victory this season, Co-General Manager and Head of Sport Pierre-Yves Jorand commented: “It is always a great feeling to win a championship like this. 2022 has been an excellent season for the team. We raced the GC32 Racing Tour with two crews so we could have the boys sailing together in a tough environment.

“We love GC32 one design – it is great to compete with the same boats, rig and sails so that it is just the crew that makes the difference. There were 10 boats racing in the GC32 World Championship in Lagos – it was a tough competition with great sailing conditions and we hope to be back.”

GC32 Racing Tour manager Christian Scherrer commented: “Congratulations to Alinghi Red Bull Racing for their victory and I would like to thank them for their long commitment to racing the GC32. We held three very good events on the GC32 Racing Tour this year, culminating in one of our best and most competitive GC32 World Championships ever, in Lagos with 10 teams competing. We are disappointed that we were unable to finish the 2022 season as planned and had to cancel our two final scheduled events in Sardinia and Spain due to a conflict of timings with some of our teams. We are currently making plans for 2023 to fit in with an increasingly busy race schedule for our top teams to ensure that the GC32 Racing Tour’s 10th anniversary season enjoys the same success as it has in previous years.”