2020 GC32 Racing Tour – continuing the successful formula Once again the GC32 Racing Tour in 2020 will comprise five events, starting in Oman but focussing in southern Europe, in venues picked to offer the most reliable conditions for fast catamaran foiling 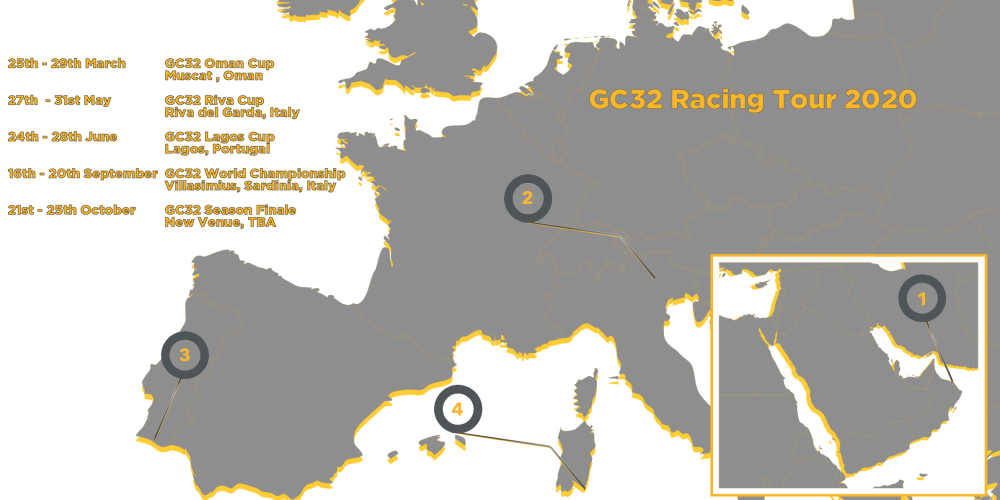 Top level, high speed, high adrenalin flying catamaran competition for both pro and owner-driver teams is again the menu for the GC32 Racing Tour for its seventh season in 2020.

At the beginning of 2019 the circuit for the sole large flying catamaran class to be endorsed by World Sailing, inherited some powerful entries from the now defunct Extreme Sailing Series. It was two of these, Oman Air and Alinghi, that match raced their way through the season with Ernesto Bertarelli’s team ultimately coming out the victor, winning both the 2019 GC32 Racing Tour and the World Championship title.
For 2020 the GC32 Racing Tour will once again visit five top venues, chosen to offer the best wind and flat water conditions for foiling catamaran competition.

As the 2019 season ended, so the 2020 will begin in Muscat, Oman. The first event will take place over 25-29 March from Muscat’s Al Mouj Marina with its adjoining luxury residential development and shopping centre, a stone’s throw from the Omani capital’s new airport. With local organiser Oman Sail having been both a venue host and racing catamaran team owner for more than a decade, another high quality event is anticipated with the local team expected to be pushing hard to right their disappointing fourth placed finish from November’s GC32 Oman Cup.

David Graham CEO of Oman Sail commented: ““It is a great privilege to have the opportunity to host the first event of the 2020 GC32 Racing Tour here in Oman. Muscat is known for its ideal conditions in March so we look forward to an exciting event for all the teams. Oman has developed an excellent reputation for consistently delivering spectacular sailing conditions alongside world-class facilities, and through our continued partnership with EFG Private Bank Monaco, we’re sure that the event will be a great start to GC32 2020 season.”

Prior to this year’s GC32 Oman Cup, teams are set to gather in nearby Mussanah for two informal training sessions.

From Oman the GC32 Racing Tour returns to Europe and one of its favourite venues: Riva del Garda, at the northern-most corner of Italy’s Lake Garda, has been a regular venue on the GC32 Racing Tour since 2016 and hosted the class’ first World Championship in 2018, after it became officially a  World Sailing-recognised class in 2017. Riva del Garda famously offers reliable, frequently strong winds and flat water, combined with the breathtaking backdrop of the Dolomites. The GC32 Riva Cup will take place over 27-31 May.

Marco Benedetti, President of Garda Trentino Promotion and Tourist Board commented: “With the GC32 class we started down a pretty innovative route, and now after four years of spectacular racing on Garda Trentino, we are certain that that choice was one of the best we made, with the participation of the world’s sailing stars. Foiling is growing exponentially on Lake Garda, from windsurfers to the Nacra 17 Olympic cats. The lake is the perfect testing ground for new equipment and boats, to fine-tune techniques in perfect wind and wave conditions. The GC32 Riva Cup has taken us to a new level, providing us with a spectacular sailing show in one of the world’s most acclaimed sailing venues.”

The GC32 Racing Tour will once again visit Lagos, Portugal, situated at the southwesternmost tip of Europe and fast becoming recognised as a top venue for leading yacht racing events. In 2019, the GC32 class staged a successful and well received World Championship out of the ancient Algarve port with a line-up of ten teams including Sir Ben Ainslie’s INEOS Rebels UK and NORAUTO, skippered by Volvo Ocean Race winner Franck Cammas. In 2020, the GC32 Lagos Cup will take place over 24-28 June.

Hugo Pereira, Mayor of Lagos commented: “It is with great satisfaction and pride that the Municipality of Lagos, for a third consecutive year, welcomes the GC32 Racing Tour, proof that the event clearly meets our strategy of promoting our natural resources, namely MAR, and the brand ‘Lagos of Discoveries’ that promotes top water sports, bringing to our bay not only athletes of distinction, but a whole set of partners, whose involvement strengthens and intensifies the event and, through our partnership, places the Municipality of Lagos up in lights internationally.”

The 2020 GC32 World Championship will be hosted by Villasimius in southeastern Sardinia over 16-20 September. This will be also be the fourth time that the GC32 Racing Tour has visited this southeast Sardinian jewel, and a favourite Italian tourist destination. Here the GC32s are hosted at the Marina di Villasimius with a racing ground next to a nature reserve located off Capo Carbonara.

Sergio Ghiani, honorary president of Lega Navale Italiana Villasimius and the city Delegate for Tourism said: “We are excited to have been selected as the venue for the GC32 World Championship in 2020. Our club has been working hard for over three years to achieve this result. As Delegate for Tourism I believe this is a unique opportunity to make Villasimius known on an international level. Villasimius has bet on activity tourism, and sailing is a perfect example of this strategy. We are happy and proud to do everything possible to make Villasimius a top sailing destination and to involve the city, its residents and its visitors too.”

For its fifth and concluding event of the 2020 season, taking place over 21-25 October, the GC32 Racing Tour will visit an exciting new venue, also renowned for its reliable wind conditions and flat water. The location of this will be announced in due course.