Throughout the GC32’s existence Adam Minoprio has regularly proved himself to be one of the foiling catamaran class’ most successful skippers. Notably the Kiwi helmsman, who a decade ago, aged 24, displaced Jimmy Spithill as the youngest person ever to become Match Racing World Champion, won the GC32’s first ever event on Lake Traunsee, Austria back in May 2013. He returned a year later with a crew from the Luna Rossa America’s Cup team, as tactician for Chris Draper, winning again.
In 2016 he played a major role in driving NORAUTO to victory overall on the GC32 Racing Tour, standing in for regular skipper Franck Cammas who was busy on America’s Cup duty. The following year he took over from Jes Gram-Hansen as helmsman of SAP Extreme Sailing Team, winning the Extreme Sailing Series that season, ahead of fierce competition from Alinghi and Oman Air.

This year, Minoprio is back on the GC32 Racing Tour with yet another new team, Oman Air. Straight out of the blocks Oman Air claimed the opening event of the season in Villasimius, Sardinia and the third event, Copa del Rey MAPFRE.

Aside from his raw talent as a helmsman-skipper, seemingly regardless of which crew he is with, one of the reasons for Minoprio’s present GC32 success stems from his time as Franck Cammas’ training partner when the French America’s Cup challenger was two boat testing in GC32s in the build-up to Bermuda. As he recalls: “We did a lot of training in Brittany which was the best part of it. It meant that me and Franck and the sailors on board felt like we took the GC32 to a new level. When we raced on the GC32 Racing Tour that year we won it easily and everyone else saw where they needed to be and got there.”

It wasn’t just time in the boat that helped the NORAUTO team raise the bar through perfecting manoeuvres, it was also developing new techniques such as using the genniker rather than the jib upwind in light conditions, something that is now common practice. Minoprio explains: “As crews get heavier we need more power in lighter winds. The gennikers are flat enough for foiling downwind, which means we can use them upwind and the heavier you are, the higher wind range you can use them in and the faster you can go…”

The most significant developments with the GC32 in recent seasons has been the level of crew fitness and how hard top teams are pushing the weight limit. “Every year the level is improving throughout the fleet. Now everyone is raising the level by getting fitter and stronger and the way we sail the boats gets more aggressive and faster, to the point where we are now pushing harder on crew weight. Unfortunately that means a bigger dip come weigh in, but that equates to speed and earlier foiling upwind.”

Minoprio says the Oman Air crew aim to hit the all-up maximum weight of 437.8kg with each crew aiming for a 2-3kg dip at weigh-in.
Crew fitness equates to the promptness of the sail handling, grinding the sails in quicker, pulling the traveller on, etc. “If it is high load – you can’t move it too fast. And the faster you move it the more stable you are and the faster you sail.” 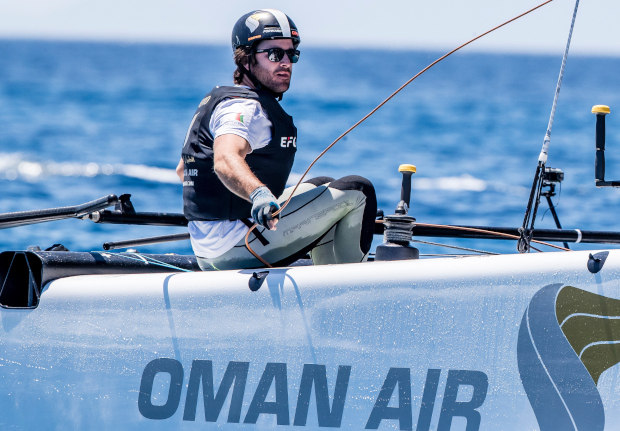 For new teams coming into the GC32, Minoprio advises that getting good at gybing represents time well spent. He says a lot of this is simply down to technique. “For me the big thing is just getting a good glide in the gybe. Still a lot of teams are just turning the boat, thinking that they should get on to the new gybe as quick as possible, but the longer you can glide on two boards, the more gains you can make.”

The GC32 being free from hydraulic systems does mean that the handling of both boards and sails can take longer and manoeuvres like Emirates Team New Zealand’s airborne ‘whip tacks’ seen Bermuda, just aren’t possible. However with the GC32 this just requires a different approach: “With these boats it is a bit of different game. But foiling upwind is happening at a lower wind range as we get heavier and gain righting moment with more power in the grinders.”

Minoprio is a fan of the relative simplicity of the GC32, free from the logistical complexity of the AC50 and 45’s wings and the weight and complexity of hydraulics. “It makes it actually a sailing boat,” he observes. “The crew have to work together and be physically fit. It isn’t just grinding and pushing buttons. On the GC32 everyone on board is sailing and there is team work and it is really good fun. You need everyone on board to be working in sync to make the boat go fast.”

In terms of how the GC32 could develop in the future, Minoprio says he would like to see it permitted for crews to dial in 1-2° of rake differential between the rudders – a technique developed for the AC50s in Bermuda which caused the catamarans to increase righting moment with the rake on the windward rudder effectively pulling the weather hull back into the water. On the AC50s the rudder differential was around 3° and in their latest iteration as F50s competing on SailGP this has increased to 5°. “If you have the windward rudder set to 1-2° to foil upwind, that is 2° of lift in the windward rudder which is currently tipping you over. If that could be knocked back to zero and the leeward one left at 2° you will gain a lot of righting moment from having no lift in the windward foil. That’s something we could do right now.” A draw-back of this is that the GC32 is not designed structurally to withstand this, however Minoprio believes it could be introduced to some degree.

In terms of the GC32 Racing Tour race format that in recent seasons has involved reaching starts in medium conditions and upwind starts in light and heavy winds, Minoprio says he enjoys the mix. “I like reaching starts, although in terms of the racing, it makes it a simpler race course if it is a one track beat – that is when it gets boring. There can be passing if there are light patches or a lot of shifts. I like 50-50 to give us a bit of everything. Maybe we could also have downwind starts!”

Despite being a hardcore racer, Minoprio also appreciates the GC32 Racing Tour’s on-board guest program which allows VIPs the chance to experience first hand what it is like to sail a foiling multihull.

But in the meantime there is the 2019 GC32 Racing Tour be won. Minoprio and the Oman Air team are currently leading after three events but this tenuous as they are tied on points with the World Champions Alinghi with two events still to come this season. 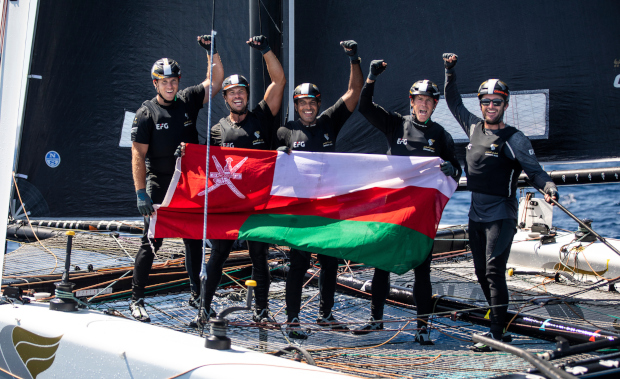