Ainslie wins in Toulon, as Cammas claims his second GC32 Racing Tour title Sadly there was no racing on the final day of the GC32 TPM Med Cup due to excessively large waves.

Large seas rolling into the Rade de Toulon’s open southeasterly side prevented racing on the final day of the 2018 GC32 TPM Med Cup, last event of the GC32 Racing Tour.

The eight foiling catamarans ventured out on to the race course ready for a midday start. While 18-20 knots of wind is usually sailable for GC32s, building waves effectively made it ‘survival conditions’. If racing had been held, boats and possibly crew would have been damaged, reasoned the race committee, who finally raised ‘AP over A’, signalling the abandonment of racing, at 1350.

“We’ve had a great event here in Toulon,” said Ainslie. “It is our fourth event on the GC32 Racing Tour and we have been improving over the course of the season. It is nice to finish with a win. This year we’ve been able to rotate a great number of our sailors though on this foiling multihull – all great preparation for our America’s Cup campaign.” 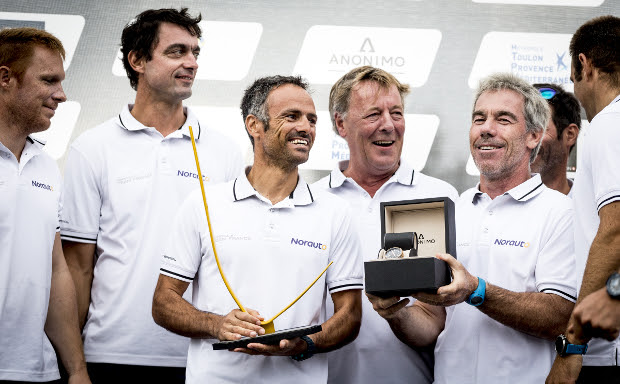 However the top two positions were reversed in the overall results for the 2018 GC32 Racing Tour. Cammas may not have won this week on home waters, but his focus was on this ‘bigger picture’: NORAUTO started the GC32 TPM Med Cup holding an eight point lead and with the 2018 GC32 Racing Tour all but tied up. “We had a very good GC32 event in Villasimius last month,” recounted the Volvo Ocean Race and Route du Rhum winner. “After that there was less pressure on us. There have been some good battles with the others throughout the year and it was never easy. We improved a bit and we had some good opponents.” For his season’s victory, Cammas not only wins the coveted GC32 Racing Tour trophy but an Anonimo Nautilo Bronze Bicolor timepiece too.

NORAUTO is the first team to have won the GC32 Racing Tour twice (the last time in 2016). How has the competition changed? “It is tighter than before, – now even the last boat can win races,” says Cammas.

Stand-out winner of the owner-driver prize at the GC32 TPM Med Cup was Australian Simon Delzoppo and his .film Racing, who also finished the event a comfortable third overall, even winning race five on Friday. “It is pretty exciting – our owner-driver event win and a third overall, behind two professional teams – INEOS and Norauto,” said a beaming Delzoppo. “We couldn’t have asked for a better result.”

Having started this season with a new, albeit, highly experienced crew led by former French America’s Cup helm Sébestian Col on tactics, .film Racing has shown steady improvement this season. “It has taken a while for the team to just gel together,” admitted Delzoppo.

Erik Maris’ Zoulou finished second in the owner-driver championship here in Toulon, but this was not enough to displace Jason Carroll and his Argo team from the top spot in the GC32 Racing Tour’s ultra-competitive overall Owner-Driver leaderboard for 2018. In this, Carroll’s US team beat Zoulou by a mere point, with Simon Hull’s New Zealand team on Frank Racing, a further two points astern.
“We struggled a bit more this season than last year,” admitted Carroll. “That is something to think about over the winter. Erik Maris didn’t show up for one event – otherwise he raced a really good season….”

Carroll and his ‘Argonauts’ also won the ANONIMO Speed Challenge at the GC32 TPM Med Cup. Their average speed of 28.97 knots, recorded on Saturday, was in fact the highest recorded this year, displacing the previous top run of 25.26 knots average, recorded by Simon Hull’s Frank Racing in Lagos, Portugal.

For this Carroll wins an ANONIMO Nautilo GC32 Racing Tour limited edition timepiece – his second after Calvi last year, but the first time when he’s been helming. “It certainly didn’t seem like we were in control as much as we could have been, but other teams struggled in the same way,” said Carroll of yesterday’s speed run.

This afternoon prizes and watches were handed out at the prizegiving in the GC32 TPM Med Cup’s race village, which has been constantly teeming with guests and spectators. This was set to roll into a special end of season party for the GC32 Racing Tour family, generously supported by the Zoulou and Argo teams.