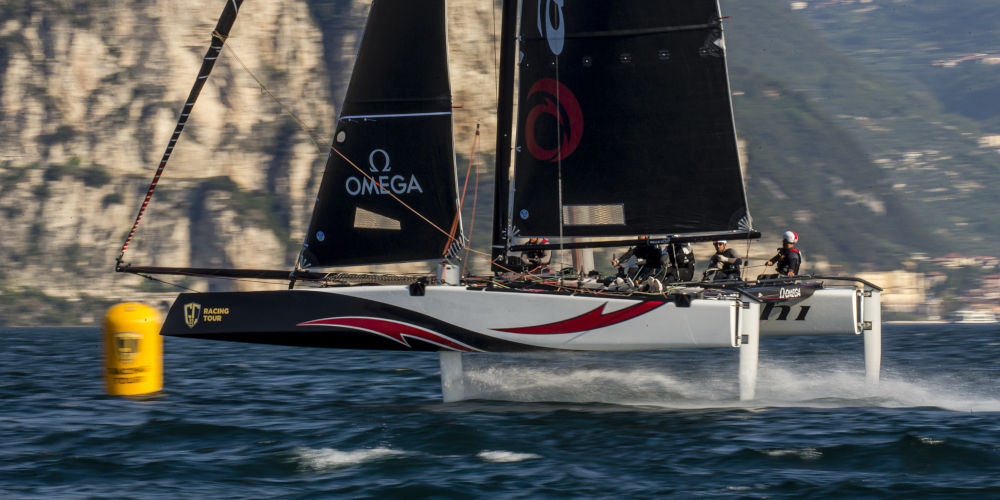 Ernesto Bertarelli’s Alinghi started the day four points ahead of Oman Air and – after six races on two different courses, during which they lost the lead, then fought back hard to recover it – ended the day four points ahead of Oman Air. With five races scheduled for tomorrow, the last day of the GC32 Riva Cup hosted by Riva del Garda’s Fraglia Vela Riva, one or other is likely to take the event title. The fight is also on for third with Red Bull Sailing Team having today displaced Erik Maris’ Zoulou from this position, although the French team is just two points astern.

Today was literally a game of two halves, PRO Stuart Childerley sending the boats out early for a 0830 start, holding three races in the magnificent Pelèr northerly. The fleet was sent ashore then returned mid-afternoon for three more races in the southerly Ora.

Both frontrunners had difficult moments. The Swiss GC32 World Champions were off form in today’s first two races, leaving them trailing Oman Air by two points. However showing their typical relentlessness, Alinghi won the next three races.

“We had a tricky morning, but it was still a really good day,” commented helmsman Arnaud Psarofaghis, who turned 31 today. “We had great racing today and a good fight with Oman Air and Red Bull.” Psarofaghis was especially pleased that this afternoon, when the wind’s orientation made the course slightly one-way, they had recovered positions.

The Swiss team set the pattern for this afternoon’s racing heading into the extreme right, until they could virtually kiss Riva del Garda’s famous cliff face, then so lifted that they were foiling upwind at 18 knots into the top mark. “If you tacked back too early you lost, so you needed to be over layline,” explained Psarofaghis, adding that this afternoon, when the wind was gusting to 20+ knots, they recorded 35 knots downwind.

Conversely Oman Air was on fire in this morning’s first two races until they were OCS in the third race and could only salvage a sixth. Early afternoon in the southerly, Oman Air also struggled, mainsheet trimmer Peter Greenhalgh explained: “We had the best starts and were launched but we chose the right mark and then we didn’t sail in the right mode – we were too high whereas we should have got the bow down and gone super-fast at them [Alinghi] when we probably could have kept them behind us. Instead they [Alinghi] sailed round us.”

Oman Air rounded off the day with a final bullet, winning the start and leading from there on. “We can recover very easily tomorrow, like we did this morning in two races. We’ll just go hard at them,” advised Greenhalgh. 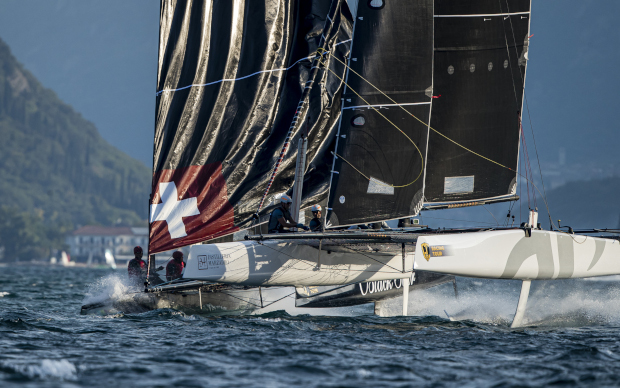 The fight is closer for third. Roman Hagara’s Red Bull Sailing Team relieved Erik Maris’ Zoulou of this position today, but after 14 races two points separates the Austrian and French teams. Zoulou proved how you can succeed by just continually banging out third and fourth places and continues to lead the owner-driver competition, but Hagara’s team showed more moments of brilliance, even winning today’s third race.

“We’re getting quite consistent and we can almost match Oman Air and Alinghi in manoeuvres, and if we make good starts can stay in front of them,” commented Red Bull’s Hans-Peter Steinacher, adding that today they hit 37 knots on one of the runs. “Lake Garda is made for our boats, we can quickly reach our top speeds.”

As to their prospects, Oman Air is eight points ahead, which is hard to recover but not impossible. “If Alinghi and Oman Air cover each other and stay at the back of the fleet… we’ll see. We have to sail well, start well to get back to the fight,” said Steinacher.

A fight is also on between Codigo Rojo Racing of Federico Ferioli and Christian Zuerrer’s Black Star Sailing Team. Both have been showing marked improvement and in today’s second race were briefly leading. However only the Swiss team managed to hang on, finishing third.

“It was a nice day, especially the morning,” said Zuerrer. Black Star’s helmsman, Australian match racer Keith Swinton agreed, feeling that they had become tired by the afternoon. “This morning we showed we can have good moments, we had all the manoeuvres right. If we put a good race together we can be really competitive.”

Codigo Rojo has only competed on one event this year but after a week’s training has shown far greater confidence. “We are improving slowly, but we are improving. Unfortunately we haven’t done as many events as our competitors. I am glad we have been fighting to the end. We are happy to be here,” said Ferioli.

Tomorrow five races are scheduled to start in the southerly Ora wind at 1300. Racing at the GC32 Riva Cup is taking place with the support of Garda Trentino, Riva del Garda Fierecongressi, Distilleria Marzadro and Omkafé.