America’s Cup challenger victorious in big breeze GC32 Lagos Cup finale The GC32 Lagos Cup, the pre-Worlds for next month’s GC32 World Championship, concluded in big breeze. Despite the flying catamaran fleet heading out an hour early, by the end of first race, the sea state was still relatively flat but with the wind averaging 22 knots and gusting to 27 it was ‘survival’ for some […] 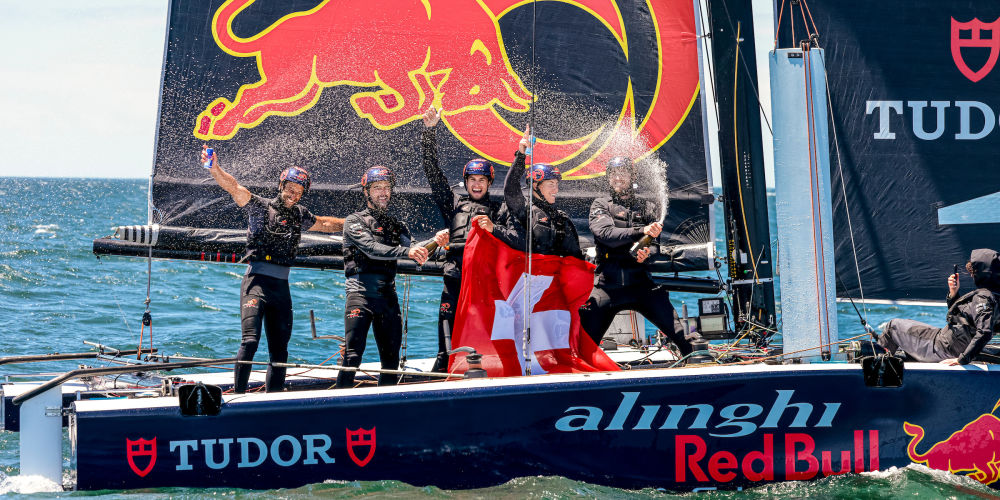 The GC32 Lagos Cup, the pre-Worlds for next month’s GC32 World Championship, concluded in big breeze. Despite the flying catamaran fleet heading out an hour early, by the end of first race, the sea state was still relatively flat but with the wind averaging 22 knots and gusting to 27 it was ‘survival’ for some of the 10 teams, so PRO Stuart Childerley made the welcome decision to abandon racing. 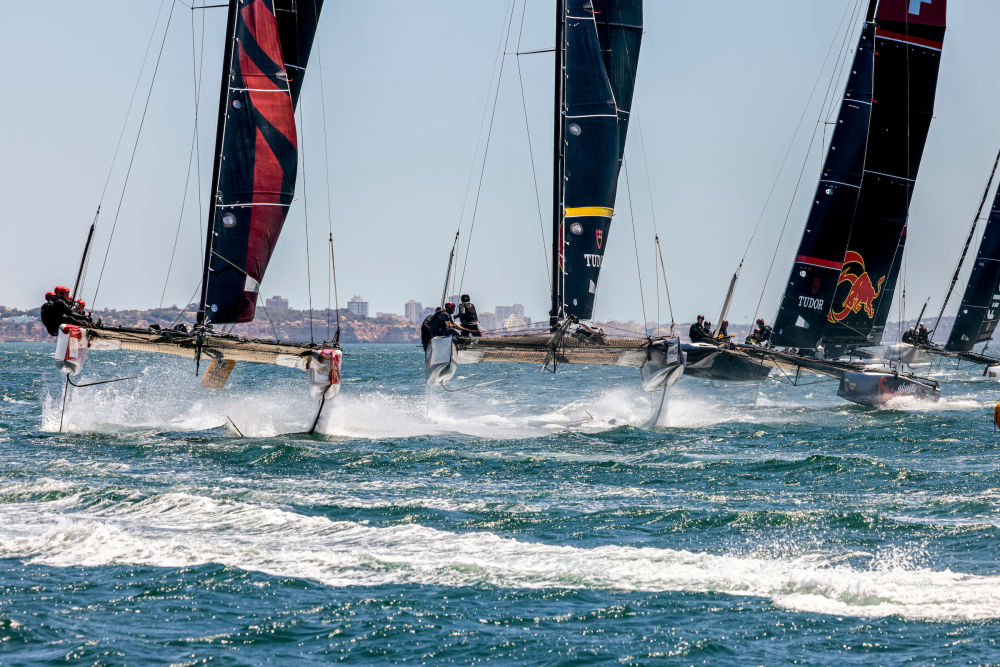 Otherwise the historic maritime port on Portugal’s Algarve has laid it on, as Lagos has always done since the GC32 Racing Tour first brought its world class sailors here in 2018. Over four days 16 races were held in flat water across the full wind range.

Once again Alinghi Red Bull Racing won, as they did at last month’s GC32 Riva Cup, but on this occasion of their two GC32s it was their development crew on SUI 15 that prevailed, on this occasion with a winning margin of ‘only’ 10 points.  For this event the Swiss America’s Cup challenger had swapped helms and the common ingredient of their two victories was helmsman Arnaud Psarofaghis.

“The crew sailed really well this week,” said Psarofaghis. “We missed a few tactical calls and made a few mistakes, which was frustrating, but overall it was fine because we won by a good margin. We came into this week with no pressure – we just want to do things better and we push ourselves.”

In today’s race Team Rockwool Racing won as SUI 15 finished fourth. In trying to recover points the second placed Danes had been pushing harder. “We were playing it safe – we needed to sail the boat well and as fast as we could,” continued Psarofaghis. “In the end the race committee made a good call to end the day because we saw 27 knots. If three or four boats can’t sail safely then there is no point in racing.”

Heavy weather specialists Team Rockwool Racing enjoyed today’s conditions as they did when they won yesterday’s breezy final race. However the race was close with Team Tilt pulling ahead at the final top mark, rounding only for a favourable shift on the last run putting the Danes back in front and Alinghi Red Bull Racing – SUI 8 pipping Team Tilt to second. 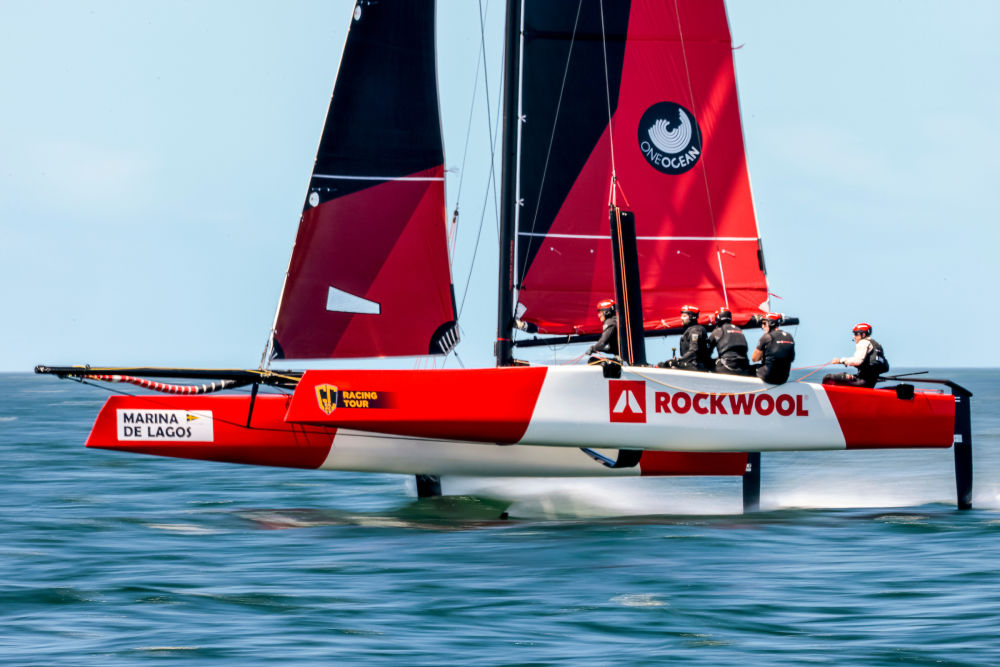 “The last race was awesome – the best, most fun racing,” said Team Rockwool Racing skipper Nicolai Sehested. “We sailed pretty well – very stable, the boat locked in and everything under control. We decided to stay with the jib to keep it simple and we were plenty fast enough: We were sitting on 35 knots the whole way down the last downwind.” 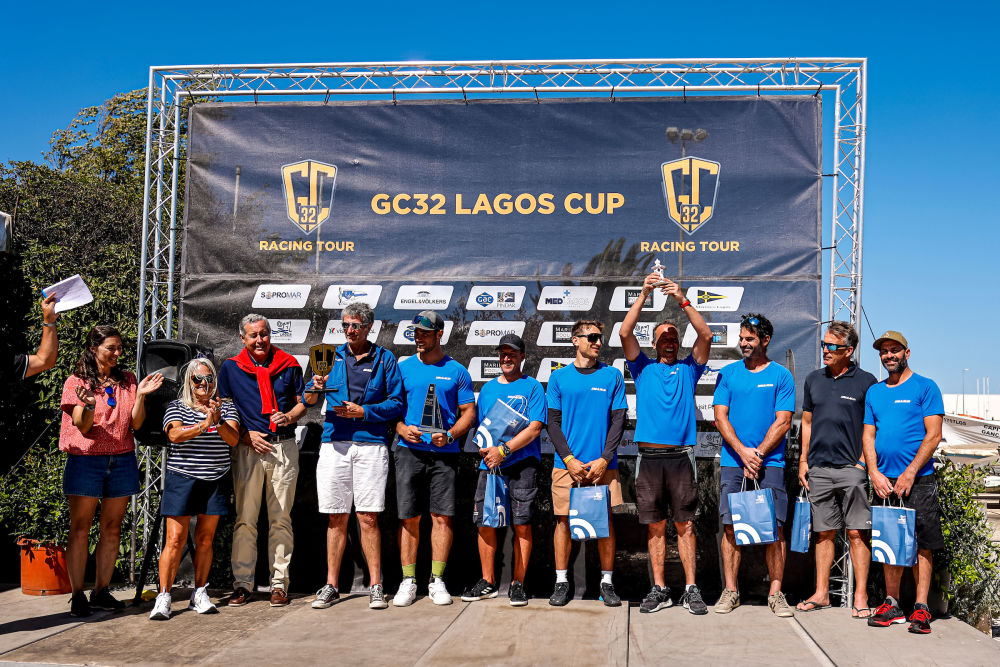 Doing an excellent job in the varied conditions was Erik Maris’ Zoulou, not only topping the Owner-Driver Championship but also claiming third overall. “As always on the GC32, and especially here, it was great fun, wonderful conditions, a great fleet,” said Maris. “Third is something given how many professional teams we are ahead of. That is testament to what the guys are doing on board. We had our ups and downs, but all-in-all we had good speed and manoeuvres. Where we are missing is on the starts,” concluded Maris, who next week swaps foul weather gear for fireproof suit to compete in the Le Mans Classic.

The teams that joined the GC32 Racing Tour for the first time this week remain on a steep learning curve. “For us it was learning, learning, learning – like power school!” said Piotr Harasimowicz, the beaming Polish owner-driver of HRM Racing Team. “We are happy. The wind was strong today but we found a good balance downwind. I have absolutely enjoyed it. We want more!”

Graeme Sutherland, skipper of Team Canada, agreed. “It was great. The whole week we’ve built really well. It has taken time to adjust to the boat and get used to the racing and making steady improvements. We have had three great days of sailing.”

Simon Delzoppo and his .film AUS Racing team showed moments of brilliance this week and enjoyed today’s racing. “It was very exciting, with lots of breeze, but everyone handled it well with some fast speeds downwind. We did 34 knots downwind but it was controllable. We went with the gennaker which was a bit daring, but it worked well.”

As GC32 Class President, Delzoppo added: “Sailing doesn’t get better than this – the sun shining, the venue, good breeze – but not too predictable – and an amazing level of competition which everyone rises up to. When I joined the class in 2017 it was easier to win races. Now you are happy if you can get up near the front! It was an awesome sight to see ten boats at this new dock, with all their country flags up. Out on the water it was amazing on the start line. Everyone enjoyed the great sailing and we got plenty of races in. Lagos delivered…”

The GC32s return to Lagos over 13-17 July for their main event of the season, the GC32 World Championship in which 11 teams are entered.