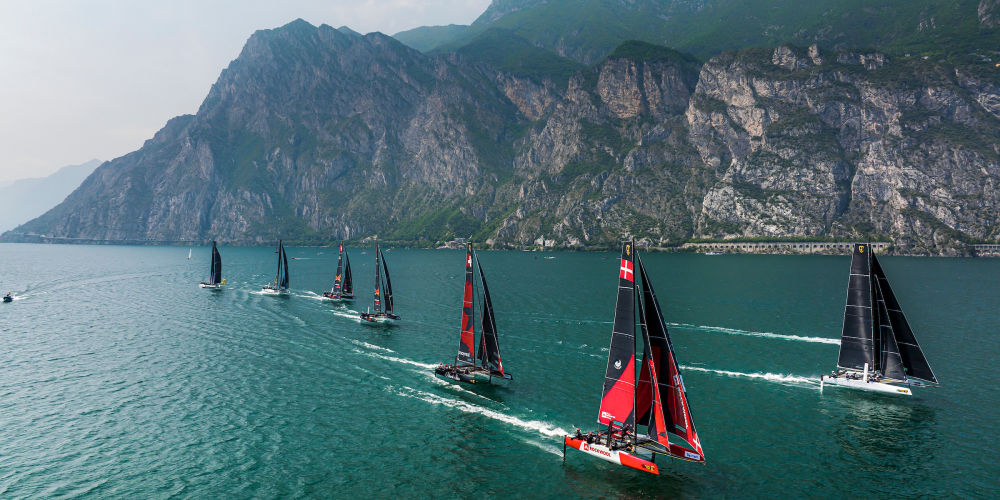 Owner-driver teams once again did well on day two of the GC32 Riva Cup, but it was Alinghi Red Bull Racing – SUI 8 and the Team Rockwool Racing SailGP team that spent the day at each other’s throats. While Arnaud Psarofaghis’ Swiss GC32 Racing Tour defending champions hold a substantial nine point lead over the young Danes at this half way stage, Nicolai Sehested’s GC32 suffered a broken worm drive rake control for their port daggerboard. Its replacement, generously provided by Erik Maris’ Zoulou team, meant Team Rockwool Racing scored maximum points in two races. Undeterred they returned for the final race and won it, much to the delight of the fans on their corporate entertainment boat. 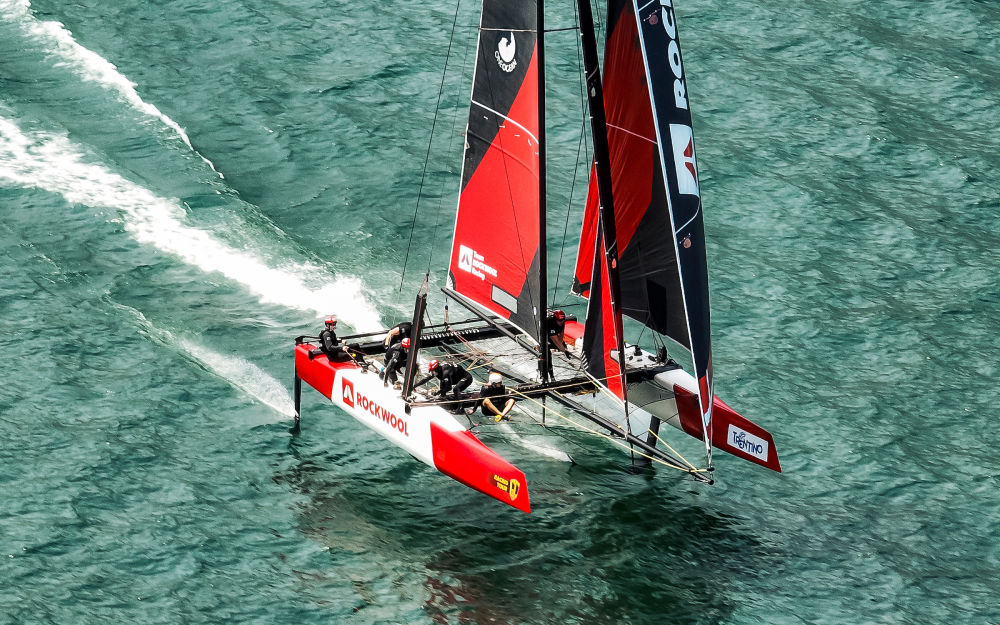 In the races they finished today, neither Alinghi Red Bull Racing – SUI 8 nor Team Rockwool Racing scored a result off the podium.

Having lost three races yesterday, today’s schedule was typically ‘Garda’: heading out early for a single race at 0900 before the northerly Pelèr wind disappeared. Everyone returned to the Fraglia Vela Riva marina to be called out again at 1300 for five more races held in the afternoon’s southerly Ora.

Today’s first race to the south of Torbole was gripping with several lead changes. Simon Delzoppo’s .film AUS Racing got off to an excellent pin end start and was still up with Team Rockwool Racing at the leeward gate. A long port tack then paid for Erik Maris’ day one leaders on Zoulou, pulling them up to round the top mark on the Dane’s transom. This remained the order at the leeward gate where Alinghi Red Bull Racing – SUI 08 rounded the port mark and stayed on starboard briefly before tacking. This put her in clear air and as she, Zoulou and Team Rockwool Racing converged on the top mark she just managed to get the overlap and rights to lead round and on to the finish.

“It was quite tricky with the wind shifting to the left and the right and disappearing during the race,” said Psarofaghis. “We didn’t start very well but Nico [Charbonnier – tactician] found some good lanes to keep us in the game. On the last upwind we had a really nice left shift, almost 20° so going into the zone at the top mark we had a 2-3m lead on Rockwool which allowed us room… It is not good for the nerves, but it is exciting to watch. This fleet is getting really strong.” 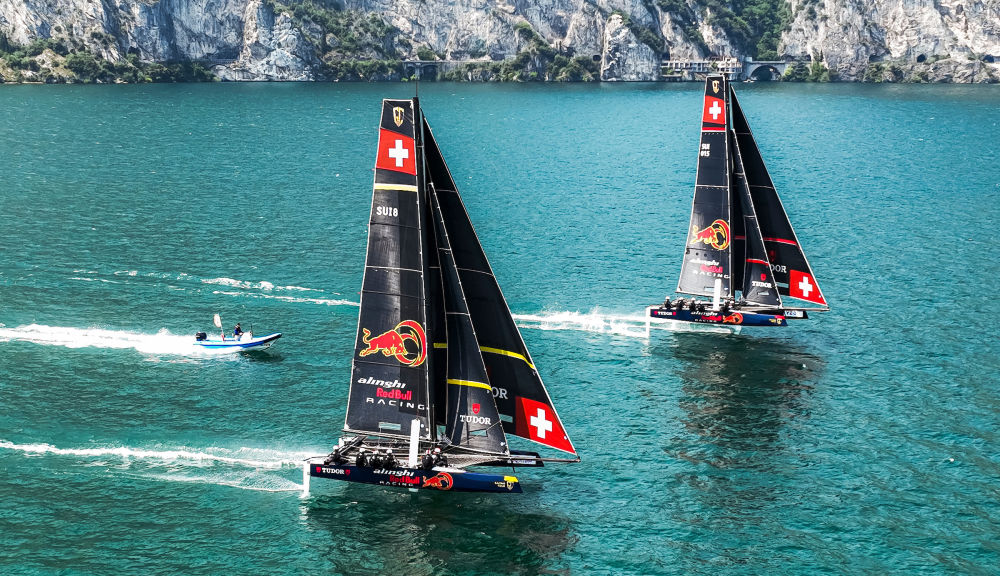 In the afternoon the Swiss team demonstrated the same form that previously won them the GC32 Racing Tour and the GC32 World Championship, when out of six races they scored four bullets. “It was a hard beginning of the afternoon,” Psarofaghis continued.  “But then we had great racing and good fights with everyone in the fleet – every time with someone different. We ended the day with big breeze which was nice.” By the mid-afternoon the wind was gusting above 20 knots with the course becoming the typical go as close into the cliff face on the lake’s west shore as you dare before tacking out so lifted that the nimble GC32s are capable of foiling upwind to the weather mark. “Everything is good to do that,” Psarofaghis continued. “It is windy and flat and the wind is quite steady. Out of the gate there is a big lift which makes it easier to foil.” Typically boats speeds today were 20 knots upwind, up to 34 downwind – staggering for a 32 footer.

If Team Rockwool Racing can continue today’s performance, the Swiss will face some strong competition. “We had a good fun with Alinghi Red Bull Racing – SUI 8,” said Nicolai Sehested. “It was great racing at such a high level. We tried to squeeze them hard but they ended up hooking us.” The SailGP team allegedly even managed a foiling tack in their GC32. 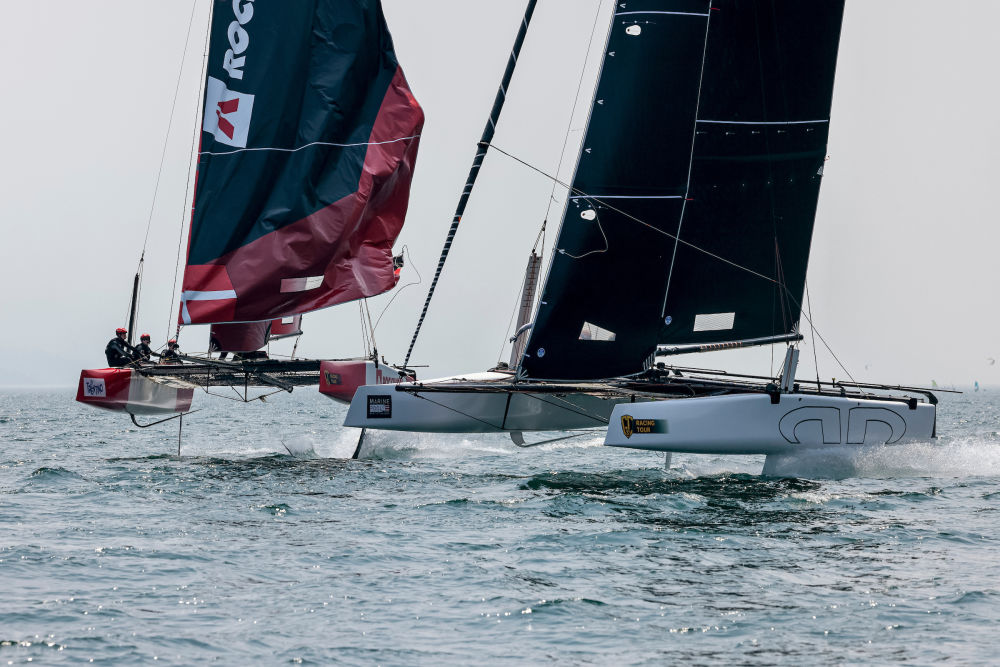 Another stand-out performance today came from Jason Carroll’s Argo team. This afternoon they finished on the podium in three races and showed a consistency not seen in a while. This must be partly due to some of the team’s new ingredients: adding Match Racing World Champion Taylor Canfield to the mix and burly Anglo-Australian America’s Cup and Volvo Ocean Race sailor Luke Parkinson, charged with correct moding of the GC32. “We are slightly new to sailing together as a group,” said Canfield. “To get the chemistry right and everything spot on in these challenging conditions is everything, but we are starting to race the boat well and it seems like it has come together for us.” During training they hit 37 knots.

The US Virgin Islander, who is still trying to fund an America’s Cup challenge, continued: “We are gaining boats around the course – that’s down to boat speed, boat handling and going the right way. We were making clear decisions and sailing good lanes. Yesterday we were leading one race and then we had a few mistakes on board and then you tumble downhill pretty rapidly.” But not today.

With a stormy afternoon forecast for tomorrow, the aim is start earlier, at 0800 to ensure another action-packed day on the water.