Black Star shines on day two of Lagos GC32 Worlds At the half way stage of this fourth GC32 World Championship, the full 10 race schedule has been achieved, half of the fleet have won races and there is an unexpected stand-out race leader in K-Challenge Team France. Racing today off Lagos again started early, at 1115, with five races held, but was otherwise a […]

At the half way stage of this fourth GC32 World Championship, the full 10 race schedule has been achieved, half of the fleet have won races and there is an unexpected stand-out race leader in K-Challenge Team France.

Racing today off Lagos again started early, at 1115, with five races held, but was otherwise a reverse of Thursday, beginning with reaching starts and changing to upwind starts for the final two races. The wind off the Algarve coastline was generally lighter, never exceeding 15 knots and the wind later dropping at times below 8 knots when it became vital to find the best foiling or semi-foiling mode downwind. 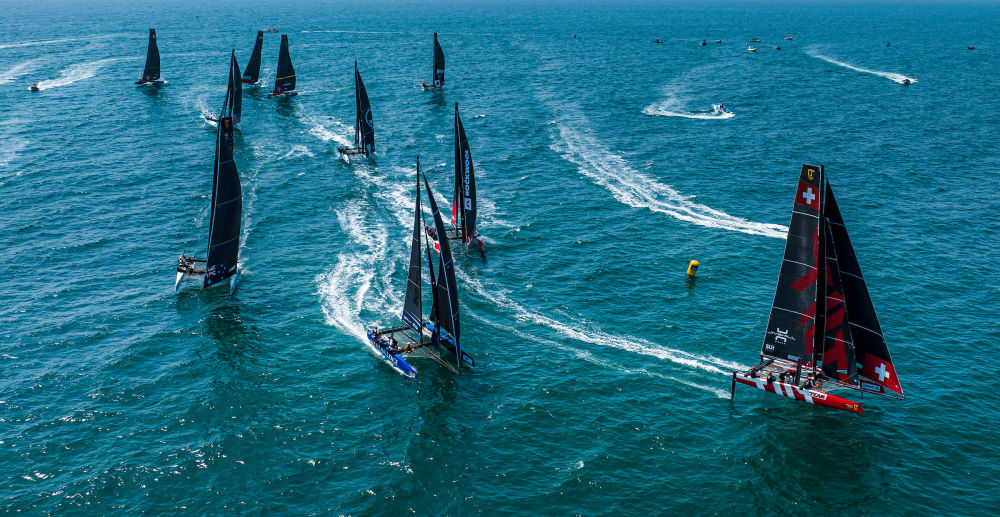 Although their performance wasn’t as outstanding as it was yesterday when they won three races, the French SailGP team, helmed by Quentin Delapierre, was again top scoring boat, winning the final race and only failing to podium in today’s third race. The French team now holds a solid 10 point lead overall from Black Star Sailing Team.

Aside from the French, Black Star Sailing Team was most improved, scoring bullets in today’s third and fourth races. “It was our best day this year definitely, but the eighth place hurts,” said owner Christian Zuerrer referring to today’s second expensive race when they had been called over early at the start along with Team Canada and Alinghi Red Bull Racing.

Generally of the day Zuerrer said: “We were trying to sail as ‘easy’ as possible with less tacks and gybes and looking for the best pressure. It was not easy. Rockwool came in [and did well] from the offshore side once, but mainly the beach [left] side was paying more. Even there the pressure was all over the place. It was all about pressure, good manoeuvres and a perfect start.”

Black Star Sailing Team helmsman, Kiwi match racer Chris Steele added: “It was really tricky conditions. Each side of the course was paying at different times and there didn’t seem to be any real trends. There were massive gains and losses to be made both upwind and downwind when you got it right but when you got it wrong you felt it pretty quickly. The positive is that we are sailing the boat pretty fast so if we can put it in the right place and if we have one good day tomorrow and the French will blink at some point, we’ll be right in it.”

Alinghi Red Bull Racing had a day they will be pleased is over, OCS in today’s second race and finishing an uncharacteristic last in today’s third race stemming from a penalty picked up for a start line infringement, dropping them to third overall. The 2018 GC32 World Champions on Team Tilt also didn’t have their best day, but managing to score a bullet in today’s second race but also two eighths.

Of the race they won, skipper Sebastien Schneiter said: “We had a good clean start and once we were ahead it became a lot easier. We have been fighting a lot in the pack and not super happy with our pace upwind. We are improving but still quite inconsistent. It is tough for everyone – a high scoring regatta, for sure.”

Gunning for another podium finish, as he managed three weeks ago at the GC32 Lagos Cup, is Erik Maris on Zoulou who won today’s first race, set up by a timed run into the weather end of the start line, then overtaking Black Star Sailing Team, which lost the lead by heading offshore as the French team chose the marginally favoured ‘beach’ side of the course.

“We won the first race, which we didn’t yesterday, so we have some catching up to do,” explained Maris. “Our objective was to win one today. The conditions were good, although a little on the light side towards the end. The fleet is very tight. Everybody is doing really well frankly. It is very difficult to come back because people don’t make many mistakes. You have to find clean air to reach your target speeds. The boats are not going as fast as when they are in the breeze, so a bad tack or gybe costs you a lot.”

Their performance today pulled Zoulou into the top half of the leaderboard, comfortably ahead of Jason Carroll’s Argo and Simon Delzoppo’s .film AUS Racing in the owner-driver sub-class, but importantly for Maris, just seven points from the overall podium. 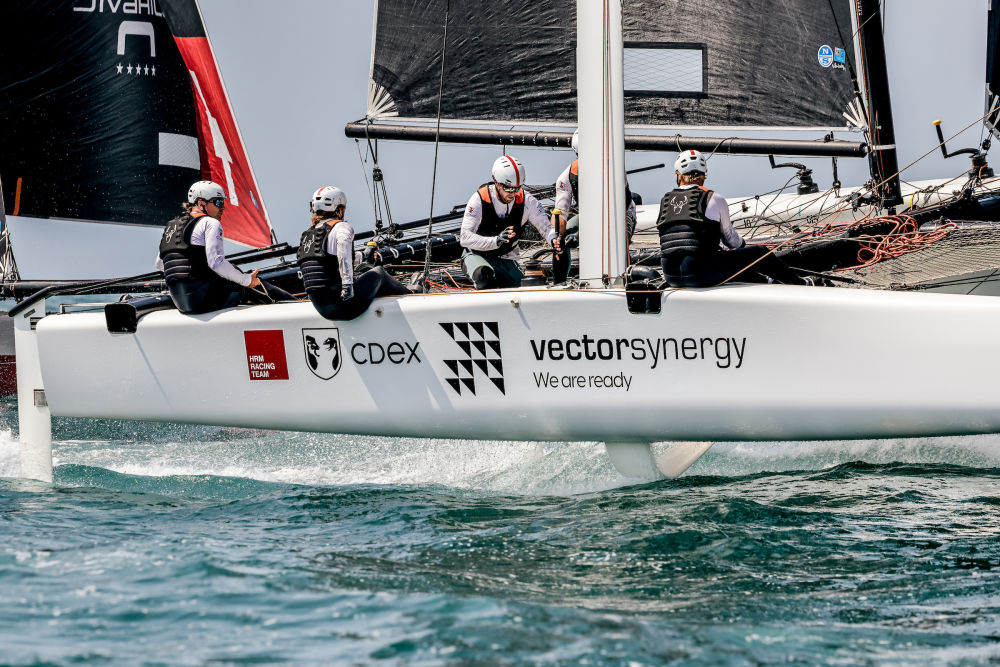 Upping their game slowly is Piotr Harasimowicz’s HRM Racing Team from Poland, at this just their second ever GC32 event. Nonetheless in today’s third race, the Polish match racers hit the line at speed to round the reaching mark alongside Team Tilt and Black Star Sailing Team and lead into the leeward gate. By the finish they had only let Black Star Sailing Team through, coming home in second place – their best GC32 result to date.

“It was all about the starting,” said Harasimowicz. “We were in the mid-line and crossed the line with the right momentum. So are happy. It is so much easier when you are in front. You don’t have to compromise your strategy and you are in clear wind. Your life is better!”