INEOS Team UK has won the GC32 competition at 37 Copa del Rey MAPFRE, run by the Club Nautico de Palma. With 19 races held across four days on the Bay of Palma, the British flying catamaran secured the overall win with a race to spare, despite this being just the second ever GC32 Racing Tour event for Sir Ben Ainslie’s America’s Cup team.

2015 GC32 Racing Tour winning skipper Leigh McMillan, helming the black boat for Ainslie this week, commented: “It felt like we were good in the starts, getting ourselves out in front and holding on to those good races when they were there.”

At this event, INEOS Team UK benefitted from having Rio 2016 Finn gold medallist Giles Scott calling tactics and a new recruit – two time America’s Cup winner Joey Newton – among her crew. “Giles made some great calls when we were in the thick of it,” continued McMillan. “And we’ve improved our boat speed. On day one it felt like we had a bit of catching up to do. We’ve always felt fast downwind, but NORAUTO had a click on us upwind.

We’ve made good improvements, but getting to know each other as a team is really what did it for us.”
Like yesterday, McMillan said they had to change their mindset to upwind (instead of reaching) starts which the race officials, led by PRO Stuart Childerley, had set due to today’s generally sub-10 knot southwesterly winds. “Obviously that changes your whole strategy. Then we had to keep an eye on NORAUTO, who have been hard to shake off all week. Today we had to ensure we got the points we needed over them.”

It was a top day for the owner-drivers, who won all today’s four races: Simon Delzoppo’s .film Racing claimed the first (his second of the event), leading from the top mark on. Knocking it out of the park today was Erik Maris’ Zoulou, showing a return to her GC32 Lagos Cup form by winning both today’s second and fourth races.

“We didn’t have very good starts – so that wasn’t the explanation,” said Maris. “We went to the right side and had good speed upwind. The rest was down to good crew work. In this fleet once you are ahead, life is so much easier than when you are in the middle of the pack.” Their win in race two was built from being first to head right on the initial upwind leg. In the final race, they had their hands full but prevailed over NORAUTO, despite Cammas crossing ahead going into the leeward gate. 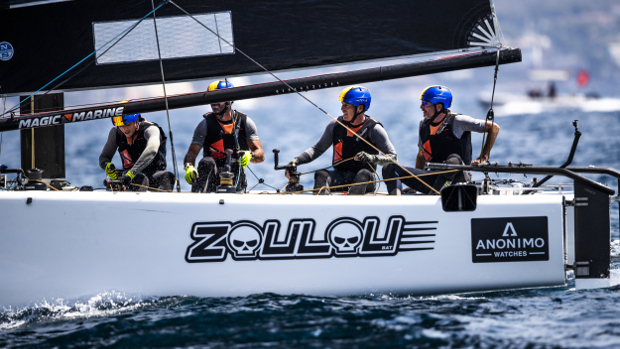 For a second consecutive year Zoulou (named after Maris’ two daughters Zoé et Luna), won the ANONIMO Speed Challenge, having yesterday recorded 23.54 knots, the highest average speed of the regatta. For this Maris received an Anonimo Nautilo GC32 Racing Tour edition timepiece. “We do take it seriously and we have fun doing it and we have probably got a good technique for the turn,” explained Maris of how he secured the latest addition to his wrist-wear collection.

Alongside INEOS Team UK and Zoulou, Jason Carroll’s Argo was joint top scoring boat of the day. The US team won race three today, and was leading for most of the second too, which they would have won had they not picked the wrong, light wind side of the last run. “It seemed like the left side was paying a bit more for us, but perhaps we missed out a little more on that yesterday.” Carroll paid tribute to the regatta and its venue. “I love sailing here – the host facility, the city and the people are great. It is an awesome regatta.”

The next event of the 2018 GC32 Racing Tour is the GC32 Villasimius Cup in southern Sardinia, taking place over 12-16th September. 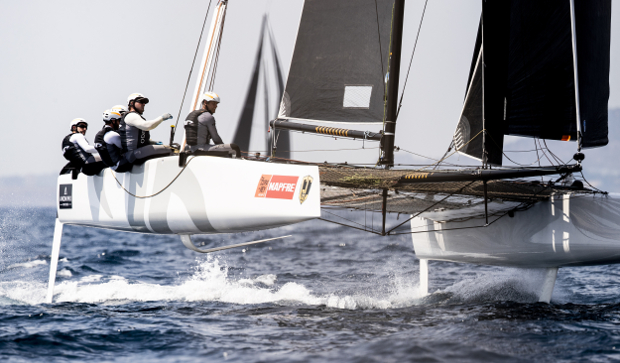