Racing on the Bullitt GC32 Racing Tour fires up again next week with its second event, taking the 32ft one design foiling catamarans to the UK, where they will race on the Solent for three days before competing in the Island Sailing Club’s J.P. Morgan Asset Management Round the Island Race on Saturday, 27th June.

Following the first event on the Bullitt GC32 Racing Tour, held on Lake Traunsee, Austria in May, six GC32 teams will be competing in Cowes, including, for the first time, the American ARGO team of two time Melges 32 World Champion, Jason Carroll.

Carroll lined up against part of the fleet when the GC32s raced at Quantum Key West Race Week in January. He is relishing the greater challenge this time: “I’m looking forward to racing in a bigger fleet with additional experienced teams on the water to learn from.” As to getting to grips with his state-of-the-art foiling catamaran, he adds: “It’s certainly a thrill, but our team has a lot of work to do at the upper end of the conditions for wave activity.”

This will be Carroll’s first time to the Solent since he raced there 15 years ago. “I expect it to be beautiful, but cold!” he says.

Also making his debut on the Bullitt GC32 Racing Tour will be two time America’s Cup winner Ernesto Bertarelli. His Alinghi team competed at the Austria Cup last month, but with Morgan Larson helming. Bertarelli is no newcomer to multihulls having for more than two decades raced them at the highest level on Lake Geneva where he has won Switzerland’s premier event, the Bol d’Or Mirabaud seven times. He raced his Alinghi GC32 at the class’ test event in Marseille in April and came ashore with the biggest grin. 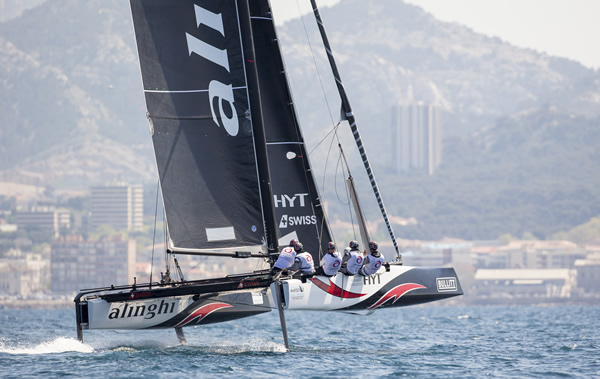 “I am really looking forward to coming to Cowes – the home of sailing – and to racing Alinghi’s GC32 SUI-008,” says Bertarelli. “I have such great memories of this iconic venue; it is where we won the 12mJI World Championship at the 150th America’s Cup Jubilee as well as the Farr 40 Worlds back in 2001 and I love that it is always packed full of people who share our love for the sport. Foiling the ‘Round the Island race’ promises to be a new and exciting challenge – we can’t wait for the start gun!”

Watch a team profile of Alinghi

Sultanate of Oman skipper, Leigh McMillan, will be sailing on ‘home waters’ when the Bullitt GC32 Racing Tour comes to the UK. Lying between the north side of the Isle of Wight and the English mainland, the Solent is one of the world’s most challenging stretches of water, renowned for its unusual and often strong tidal flows, its numerous sand banks and other obstacles. In yacht racing history it is significant for being where the first America’s Cup was sailed in 1851.

Sultanate of Oman comfortably won the Bullitt GC32 Racing Tour Austria Cup last month, despite it being the team’s regatta debut aboard a foiling catamaran. “We don’t have a lot of experience in foiling and in Austria it was light winds, which probably played into our hands,” admits McMillan. “I have always enjoyed racing in the Solent as you get good breeze and you have a lot of tide, so there are a lot of different factors that come into play. It should be a good experience. Hopefully we’ll have some good foiling and we’ll learn more about sailing on foils.”

The Omani team’s crew remains as it was in Austria except that Emirates Team New Zealand’s Glenn Ashby is being replaced by three time America’s Cup sailor Ed Smyth, who was part of McMillan’s The Wave, Muscat crew when they twice won the time Extreme Sailing Series.

McMillan is especially looking forward to sailing the GC32 in the J.P. Morgan Asset Management Round the Island Race, which at 50 miles is effectively a long distance race for the class. However given the right conditions, a vessel capable of 40 knots and a crew with adequate courage, it could be a record-breaking high adrenalin sprint. “I hope we get conditions which aren’t too windy nor too light,” says McMillan. “It would be awesome to be able to go all the way around on foils.”

Inshore racing will take place on the Solent over 24th-26th June, before the GC32s compete in the J.P. Morgan Asset Management Round the Island Race on Saturday 27th June.

Spindrift racing will not compete in the GC32 ‘Cowes Cup

Following the serious accident on Tuesday at Lorient, and out of respect for the victim, Spindrift racing is temporarily suspending its sporting activities.

Yann Guichard, skipper of Spindrift’s GC32, said : “Out of respect for the victim of the accident and those close to her, we have decided to suspend our training for several days. We also wish to pause from competition, and so we will not take part in the GC32 Racing Tour in England next week.”