Danish sustainability giants join the GC32 Racing Tour One of the joys of the GC32 Racing Tour over its last eight seasons has been having some of the world’s top teams and sailors signing up, to test and develop their skills in the still relatively new discipline of ultra-fast foiling catamaran racing. The latest team to succumb to this lure is Team Rockwool […] 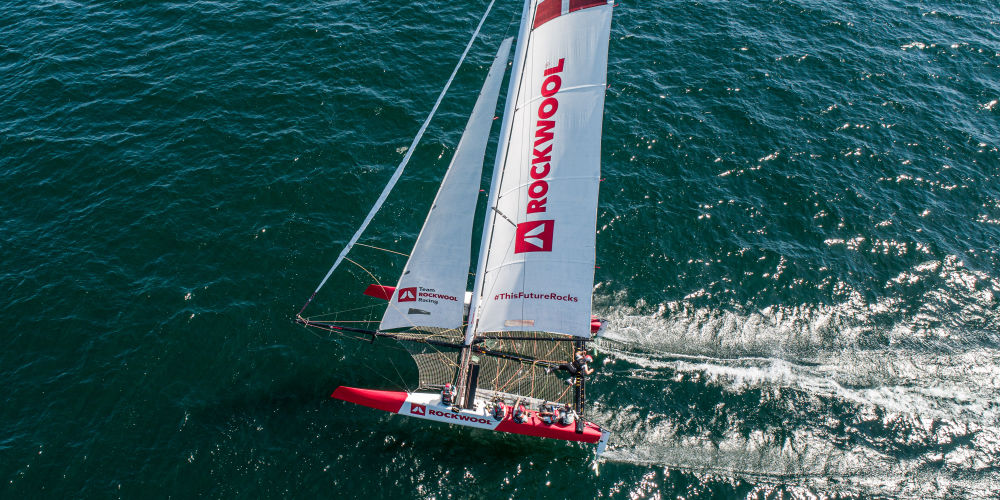 One of the joys of the GC32 Racing Tour over its last eight seasons has been having some of the world’s top teams and sailors signing up, to test and develop their skills in the still relatively new discipline of ultra-fast foiling catamaran racing. The latest team to succumb to this lure is Team Rockwool Racing. This season they are combining their time flying the flag for Denmark aboard F50s in SailGP and in the tried and tested Martin Fischer-designed catamarans competing on the GC32 Racing Tour.

Denmark is not new to GC32 racing. For several seasons leading Danish match racers, Jes Gram-Hansen and Rasmus Køstner, campaigned the SAP Extreme Sailing Team. In fact it is their boat that has now taken the colours of the sustainable non-​combustible stone wool insulation giant along with former co-skipper Køstner.

However Team Rockwool Racing is a whole new team. Helmsman and skipper is another talented Danish former match racer in 30-year-old Nicolai Sehested. From his early 20s Sehested followed in the footsteps of Gram-Hansen and Køstner as a rising star on the World Match Racing Tour during which time he notched up more than 30 podium finishes in the top match racing events internationally. Since then he has migrated across to a very different avenue of the sport, twice competing in the Volvo Ocean Race, first with Team Vestas Wind and then as a helmsman/trimmer aboard Team AkzoNobel, finishing fourth overall in the 2017-18 edition of the round the world race. 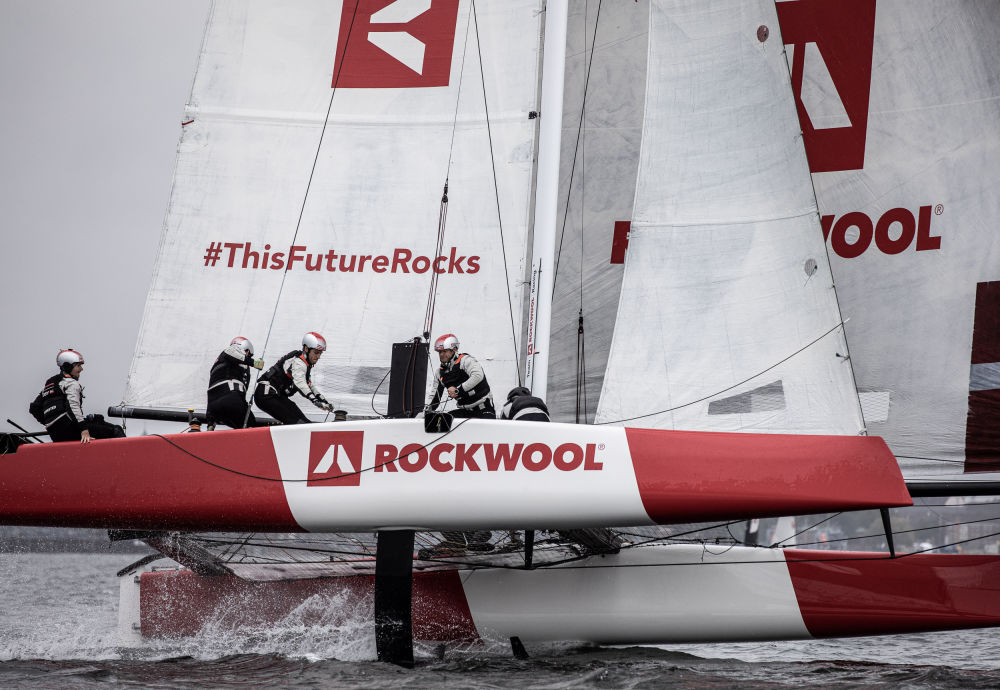 “It is good fun, it is a boat you can throw around and it is still fast and exciting,” says Sehested of his initial impressions sailing the GC32. “I think the best thing about it is that it is a one design class. You have five or six other boats racing against you on a tight course and that will be a good learning tool for us with lots of good racing.”

Sehested relishes the prospect of competing against some world class sailing teams including former America’s Cup winners and multiple world champions. “For sure with teams like Alinghi and Red Bull, etc we are going to have a bit on at the beginning of the season, but hopefully we can catch up with them.”

For many sailors who have come from conventional ‘low riding’ monohulls and multihulls, the step into foiling boats can be a significant one, less due to the flying aspect and more thanks to the huge speeds of which such boats are capable. While the F50 can achieve 50 knots, the more diminutive GC32 has frequently nibbled at 40. However Sehested says he is having no problems acclimatising to this state of the art genre of sailing. “Fast racing and fast circuits – that is something I have been doing for a long time, so I find it quite natural. We started with slower boats like the M32 on the World Match Racing Tour, but on those you still had to think ahead and position yourself well, so I don’t find that too difficult. Also the Ocean Race was fast, thinking-ahead sailing and it fits my temperament well.

“For sure it makes a big difference when the boats are foiling. Your decision time comes down a lot – by the time you think of the next move, it is already too late. So you really have to race on your instincts and you don’t have much time to prepare and think ahead about where the other boats are positioned and how you want to attack them. You pretty much just come around the mark and within the next five seconds you have to execute a manoeuvre. You have to be two or three steps ahead all of the time which is cool and fun, but a bit of a challenge.” 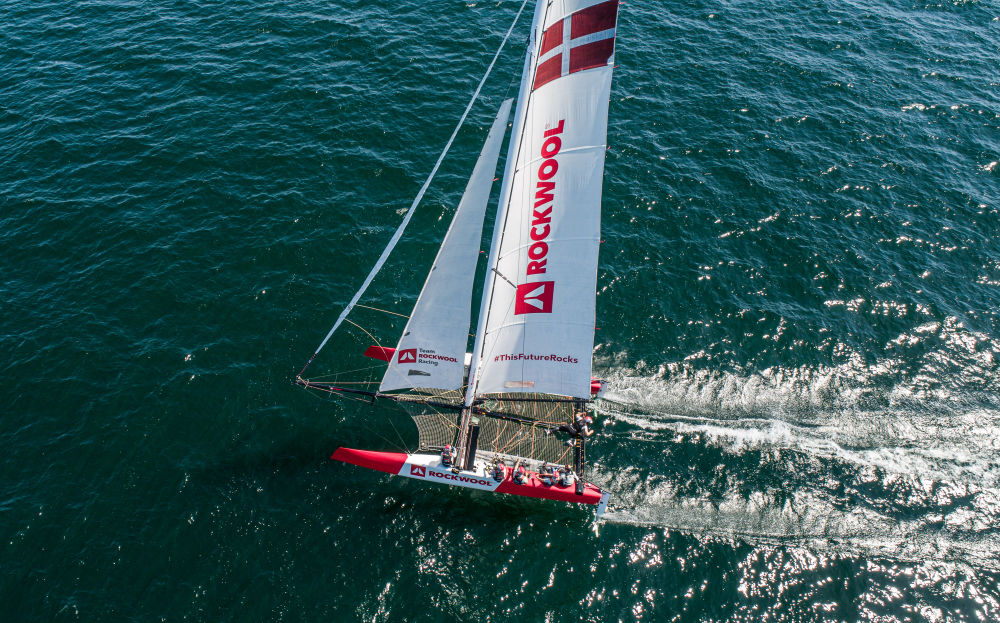 The one design twin hulled flying GC32 speedster doesn’t have the F50’s complexities of hydraulics or a wing rig, and so it does provide sailing teams with an effective half way house with familiar sail controls and a boat that is manageable in size while still providing sizzling speeds. With the F50 Sehested says they are having to spend most of their time focusing on how to sail it rather than how to race it but with the GC32 he anticipates it will be easier. “I hope the GC32 racing will allow us to work on our tactics and starts, etc and not spend too much energy on sailing the boat. It might be harder to sail than we think, but we hope we can race the GC32 at a high level from the get-go.”

Fortunately with the hugely experienced Køstner on board they should be able to get up to speed rapidly. “Hopefully we won’t have to spend too much time learning how to sail it and can lean a little bit on his experience,” says Sehested.

The GC32 provides a space for an on-board guest who gets to experience the ride of a lifetime, an opportunity usually reserved for race crews. Having only acquired their boat last year, Team Rockwool Racing has yet to compete on their GC32, but they did spend much of 2020 sailing it, using their new vessel as a corporate activation platform.

As Sehested explains: “Some of the racing and training we didn’t manage to do because of COVID, but we did a lot of corporate activation, which was important too. We managed to get to Kiel Week with Rockwool and their guests and their clients and we did a lot of that as well in Denmark. We are happy we managed to achieve that so this year all our focus will be on the racing and improvement.”

Over the years a number of top tier companies have been involved with sailing and few come bigger than Red Bull, long term supporters of double Olympic gold medalists Austrians Roman Hagara and Hans Peter Steinacher, who compete on the GC32 Racing Tour.

So what is the attraction of sailing to Rockwool? “Rockwool is a really fast growing company,” says Sehested. “Their timing is perfect in terms of their focus on sustainability. They have been trying to spread the word about sustainability for many years and if the whole world used their products we would save 70% of the CO2 [emissions] in a heartbeat. Rockwool is trying to spread the message about the products they have which can help fix the climate issue, so we are helping to create awareness of that. Obviously sailing is a sustainable and cleaner sport than most other sports, so it is a good platform for them.”

In addition to using sailing to spread their corporate message globally and as an entertainment platform for their VIP guests, Rockwool, via their sailing team, is also ‘putting back’ into their local community at home in Denmark.

Sehested and his team are running a series of ‘Rock The Boat Academies’ which aim to help train and develop young sailors, regardless of their background or affluence. This initiative began last year. “Young, up-and-coming sailors come and sail with us,” says Sehested. “The sailors just have to show up with their boat and we train them. I think if you can really make sailing more mainstream, where it is not about where you are from or if your family sails, then more talent will come in and [we will find] a lot more high level sailors. We are trying to remove the financial barrier to it so everything is taken care of by Rockwool.

“It is important for us that we do something for the sailing community in Denmark. If we can leave the sport in a few years and have created something and have inspired more young sailors to go down our road and increase sailing in Denmark, then we will have done a good job. We are putting a lot of effort into handing down our experience to the next generation so they can follow in our tracks.”

In these difficult times due to the pandemic, only two Rock The Boat Academies were held last year and Sehested expects another two this season. “The one in July is almost full with 40+ sailors, which is the limit.” When life returns to normal, they anticipate holding more.

The Academies are also providing a pathway for the most exceptional young talent to experience life inside a professional sailing team first hand.

Sehested says that competing on two circuits that each involve foiling boats is also helping to engage young sailors. “In the last year and a half we now have 20 Waszps [junior versions of high tech Mach 2 foiling Moth] in Denmark. It is obviously very cool to see that foiling is inspiring people and is attracting young sailors who might find sailing an Optimist a bit boring and slow, but now there is an option to go fast, a bit like surfing…”

We welcome Team Rockwool Racing to the GC32 Racing Tour. 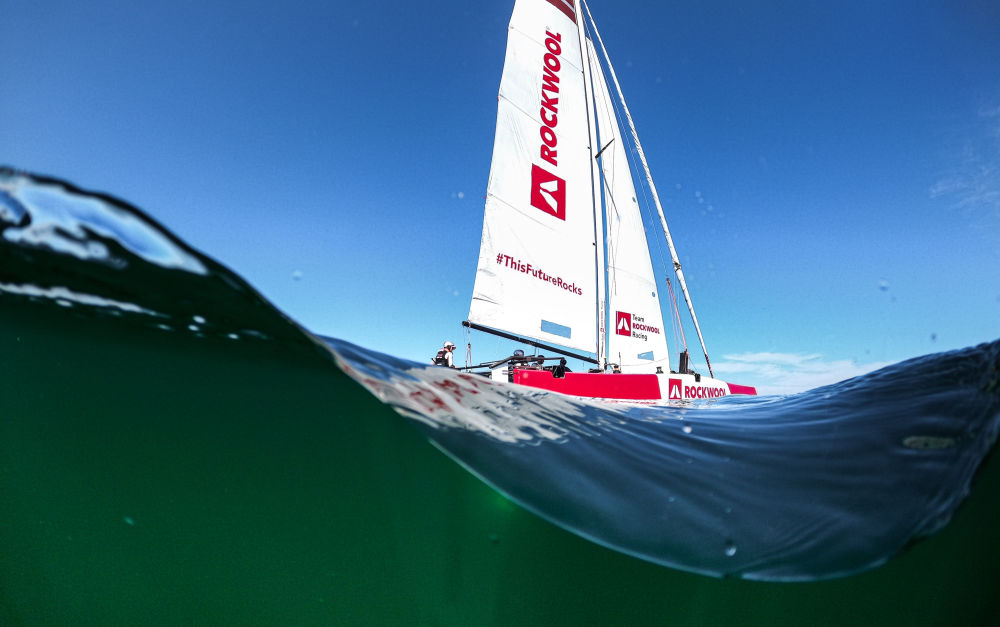