K-Challenge chase championship as Black Star battle back The two top boats edged further away from the eight other flying catamaran teams on the penultimate day of the GC32 World Championship, being held in Lagos, on Portugal’s Algarve coast. Another uncharacteristically light day saw the easterly wind peak at just over 10 knots for the first race allowing one reaching start to take […]

The two top boats edged further away from the eight other flying catamaran teams on the penultimate day of the GC32 World Championship, being held in Lagos, on Portugal’s Algarve coast.

Another uncharacteristically light day saw the easterly wind peak at just over 10 knots for the first race allowing one reaching start to take place before the course was reconfigured for upwind starts, allowing two more to be held. On the last leg of today’s third race the wind dropped to just 3 knots and while this race finished successfully, that was it for the day. 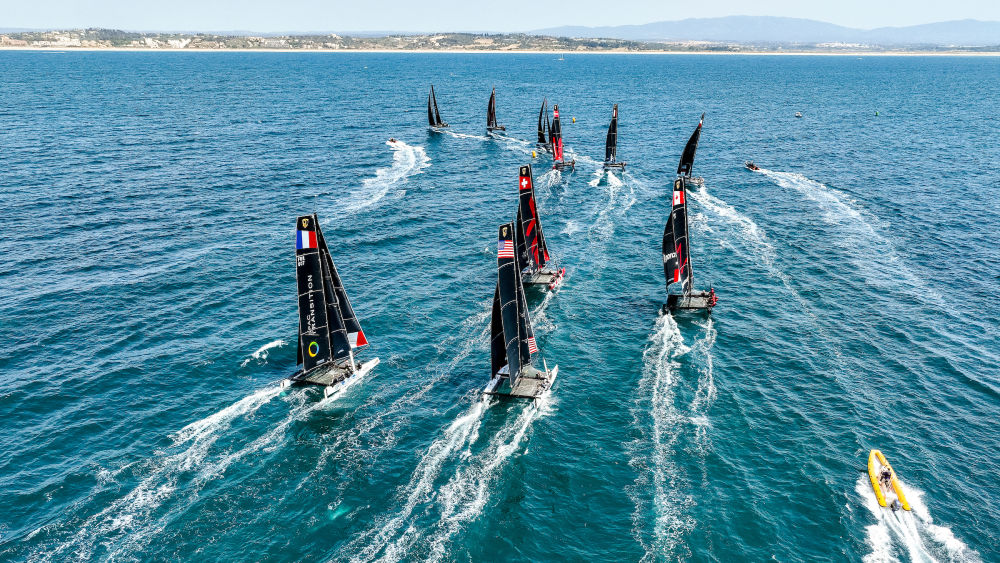 Given the vagueness of the conditions, it was impressive that the two top boats still maintained their consistency– K-Challenge Team France remain the overall leader going into the final day, but Christian Zuerrer’s Black Star Sailing Team was the top scoring boat today, posting a most impressive 1-3-1 and reducing the French team’s lead from 10 points to 6.

The first reaching start race saw the welcome sight of owner-driver Simon Delzoppo’s .film AUS Racing lead into the reaching mark and the leeward gate, only to be overhauled by Black Star coming into the top mark. Team Rockwool Racing pulled up to third at the second leeward gate rounding. Then an altercation with Alinghi Red Bull Sailing coming into the final mark dropped the Australians to fourth. They subsequently also finished fourth in today’s second race.

“We are very happy with our starts,” said Delzoppo. “We have been doing some work on our time and distance. Rhys [Mara] is doing a good job calling the numbers and we are working well together as a crew. We got out our nose out in front in a few races – now we just need to hang in there for a few more.”

A greater owner-driver battle took place in today’s final race when Jason Carroll’s Argo set off down the final run with a giant lead with Erik Maris’ Zoulou holding second on the left side of the course. 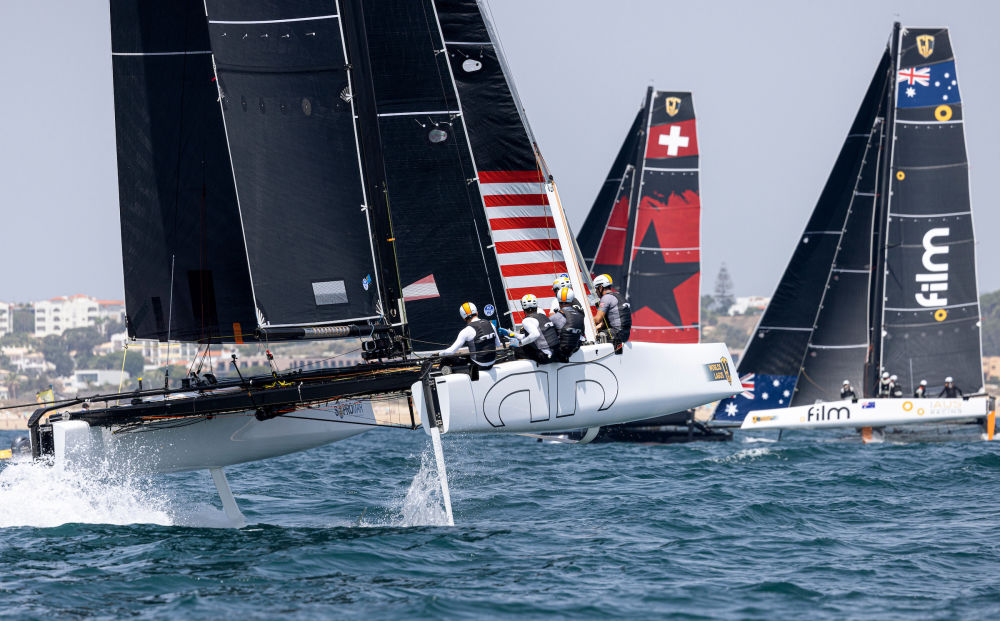 Unfortunately for the US team not only did the wind drop to 3-4 knots meaning that both their usually nimble GC32’s hulls were firmly stuck to the water, but they encountered some other problems: “We were miles in front, but we ran into a weed patch before we gybed and we could never get going on starboard,” explained Argo’s tactician Laser Olympic gold medallist turned America’s Cup sailor, Paul Goodison.

Argo reached across to try and cover Zoulou but both boats suffered in the middle allowing K-Challenge Team France to slip through on the left only in turn to be pipped at the post by Black Star Sailing Team coming in from the right. “In the end we were drifting along in 3 knots,” continued Goodison. “It was frustrating not to capitalise on that big lead – but we couldn’t fly high enough to get the weed off.

“Zoulou are obviously who we want to beat, and we had a good battle with them, but unfortunately they came out on top a few too many times today! We have a few things to work on, but it is good racing and very tricky in this light stuff.”

Alinghi Red Bull Racing had a better day posting a 3-3-5 and holds third overall, 14 points ahead of Zoulou. “The day was good. but still the guys in front did better than us,” said skipper Maxime Bachelin, who had slickly wriggled out of being OCS in today’s second race through having enough room to leeward, simply managing to dip the line and restart. As to why the lead duo are doing so well, Bachelin reckons: “They are fast. They see the wind very well and go to the good side. And they start well, whereas we had three bad starts. It was difficult but we managed to catch up quite a lot. ‘Never give up’.”

He added that today was less about picking the right side but starting well, ensuring you were constantly in clear air and being able to maximise boat speed. “We will keep pushing until the last race for sure. You never know – maybe someone will have a bad race. Every point is counting.”

While this has been a high scoring regatta for most, there remains a tight group in the middle with fourth placed Zoulou and Sebastien Schneiter’s Team Tilt tied on 67 with Team Rockwool Racing one point astern.

Tomorrow racing is due to commence again at 1100 with five more races and a potential 50 points available. While the K-Challenge Team France crew will be attempting to sail conservatively to protect their overall lead, Black Star Sailing Team will be on the offensive, much to the delight of the young antipodean match racers in the Swiss team’s crew. “You never can tell what will happen,” confides Christian Zuerrer. “There is still 50 points available. We don’t care about the other teams, we will just sail our own boat. Tomorrow if we match race K-Challenge Team France then maybe Alinghi Red Bull Racing will come closer. But if we have to win the final race, then of course we will match race…”