Fighting for podium positions at the GC32 Worlds Alinghi is on fire with a 16 point lead going into the final day of racing at the 2019 GC32 World Championship in Lagos, Portugal

Fighting for podium positions at the GC32 Worlds

Conditions took on a different turn for day three of the GC32 World Championship. While a brisk northwesterly was anticipated, the wind that blew for the majority of the day was southeasterly, backing into the east as the afternoon wore on. This became patchy during the third and what would become the final race of this penultimate day of competition.

Class act at the GC32 World Championship, taking place in Portugal this year with the support of the City of Lagos, Marina de Lagos and Sopromar, is Alinghi. The two time America’s Cup winners started the day just three points ahead of Oman Air, in turn six in front of INEOS Rebels UK. However the immaculate Swiss ended the day with a monster lead of 16 points, after winning the first two races and pulling a rabbit out of the hat to come third in race three. The next best scoring boat was the ever improving defending champions, Team Tilt on 10, while the day could have gone better for Oman Air, which finished last in race two, mainly the result of picking the wrong side of the first beat.

“It was tricky, but we are used to sailing in the light winds on Lake Leman. At a World Championship it is good to get a range of conditions – we are loving it here,” enthused Alinghi tactician, Nicolas Charbonnier. “I think we have a lot more experience than the teams that didn’t sail the Extreme Sailing Series because we did so many races in light winds and we are confident in what we do in that.”

In the first race it was the turn of Red Bull Sailing Team to lead at the top mark. The Austrian catamaran veterans led by Roman Hagara and Hans-Peter Steinacher had sped out of the start on port pushing hardest to the right. However holding back the ever charging Alinghi was like trying to hold back the tide and even changing the sides on the second beat, a move that typically doesn’t pay here, caused the Swiss to take the lead by the second top mark rounding.

“It was pretty tricky and today we had lighter winds than the other days – it was a bit mixed up,” said Hagara. Red Bull also appeared to have done well for a while when they alone split left up the second beat of race three. “We saw some pressure but we ended up in the same position. The big change was in the downwind pressure. There you could lose a lot,” said Hagara.

And this is where the Ben Ainslie-skipper INEOS Rebels UK had a second day ending on a high. At the first top mark rounding in race three, the British team was eighth (with Alinghi in an uncharacteristic ninth) and as all the boats ahead streamed off down the right side of the run, they both split left. This controversial move paid handsomely and after a short starboard, they gybed. A better layline call from INEOS Rebels UK put them into the lead, which they never relinquished.

“We were talking about the tack-set all the way up, because it wasn’t a lack of pressure on the left, it was just that we just never had a leftie to get back across,” explained INEOS Rebels UK’s tactician Giles Scott. “We noticed there was still pressure on the left and pressure is kind downwind in these boats because with one knots’ difference in boat speed you can get up on the foils and sail 20° lower.”

Below: Alinghi is by far the stand-out boat of this GC32 World Championship. Photos: Sailing Energy / GC32 Racing Tour. 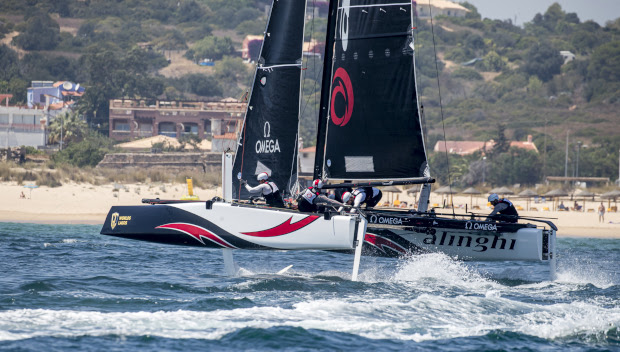 In this same race, Phil Robertson and his CHINAone NINGBO team showed a glimpse of their expected form (Robertson won the GC32 Championship in 2017 before it became a World Sailing-sanctioned event). Up the first beat, the Chinese team went hard right, just enough for them to cross the fleet subsequently on starboard.

“We finished on a high which was nice and held on to a fourth, which wasn’t a bad result for us,” said Robertson. “It was a bit funky obviously and pretty tricky to call all day. There were big gains and losses and in that race some people who were pretty deep at mark one went the opposite way and came out in front. It is hard to predict that stuff. And there were foiling and non-foiling modes downwind because of the big holes and shifts.”

Compared to his previous GC32 campaign with Oman Air, Robertson is not benefitting from sailing a chartered GC32. “You have to have time to get it how you want it and we haven’t had that. The other guys here are seasoned professionals with very cocked boats, while ours has been a bit left behind.”

Going into the final day Alinghi look strong to become the new GC32 World Champions but the tough fight will be for the remaining podium places, especially with INEOS Rebels UK second, tied on points with Oman Air.

Anticipating a last warning signal at 1530 and in an attempt to get in five races, tomorrow’s start time has been brought forward to 1130.