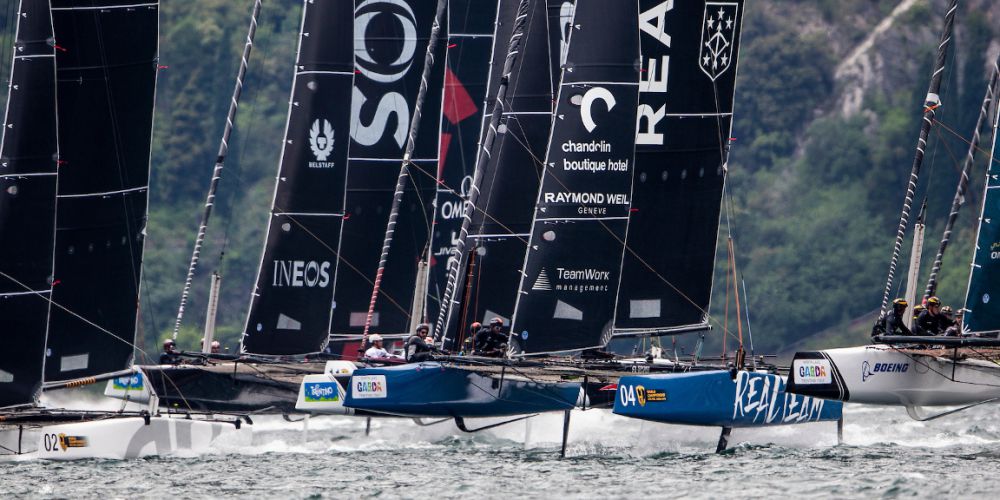 While teams have been formally taking part in practice racing today, tomorrow flying catamaran competition starts in earnest out of the Fraglia Vela Riva in Riva del Garda at the first GC32 World Championship. The event will be a rare occasion when GC32 Racing Tour and Extreme Sailing Series teams get to lock horns.

The race area is one of the most spectacular in sailing with a 1.8km high mountain and vertical cliff face immediately to the west, the lake disappearing off into the distance to the south with the Dolomites either side.

A first timer to the magnificent lake is Zoulou’s owner-driver Erik Maris: “The setting is just incredible. It is probably the perfect place for our foiling catamarans, provided we get sun and wind…” Typically the northerly Pelèr wind blows until the southerly Ora edges up the lake and overwhelms it.

Maris is no stranger to World Championships. In 2006 he claimed this title in the highly competitive Mumm 30 class. Of this week’s GC32 Worlds he says: “This will be a very special event – probably the best World Championship this year in sailing, certainly in big boats. When you look at the crew lists, everybody is here from America’s Cup sailors to young Olympic dinghy sailors – it is daunting and very inspiring, but that is the reason I am here: To sail against these guys and get my butt kicked! It is perfect, what I like.”

Across the 13 teams competing at the GC32 Worlds are numerous other past sailing World Champions in boats of all shapes and sizes. Jason Carroll and his Argo team won this title in the highly competitive Melges 32 in 2013 and 14. Ernesto Bertarelli is best known for successfully challenging and then defended the America’s Cup with his Alinghi team, present leader of the Extreme Sailing Series, but also helmed his own boat to victory in the Rolex Farr 40 World Championship in 2001. NORAUTO skipper Franck Cammas is multiple World Champion in both the ORMA 60 trimaran and C-Class catamaran. In addition to his two Olympic gold medals, Red Bull Sailing Team skipper Roman Hagara won two Tornado World Championships. Even Principal Race Officer Stuart Childerley has multiple world titles to his name, notably two in the Etchells keelboat.

Joining Roman Hagara’s Red Bull Sailing Team this season as helmsman is former America’s Cup foiling catamaran helm and main trimmer Chris Draper, a double 49er skiff World Champion. “This is an awesome event with an incredible line up of people. There are not really any weak teams – everyone has been sailing these boats a lot and putting in mega-hours. It will be an awesome Championship.”

While the Austrian team’s main driver is to gain position on the Extreme Sailing Series leaderboard, Draper admits that if they won this week: “We’d be absolutely stoked. It is an honour to be here and to be able to drive. We want to do the team proud.”The person who has won the most prize money from a single World Championship is Oman Air skipper Phil Robertson, who received the US$ 1 million prize when he became Match Racing World Champion in 2016. The Kiwi skipper, since dubbed ‘the Million Dollar Man’, is also the unofficial defending champion of this week’s event, having won the GC32 Championship held in Oman just over a year ago. SAP Extreme Sailing Team helmsman, fellow Kiwi Adam Minoprio was also Match Racing World Champion, only in 2013 when the prize money was more modest. 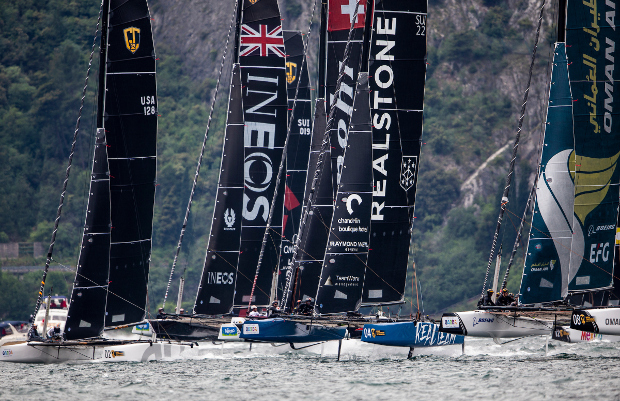 “There is something about a World Championship which makes it different to other regattas,” says Ashby. “Aside from the Olympics, the Worlds are the pinnacle of any class and to have the GC32s all sailing around together it will be pretty busy. I am super excited about it and it will be great to see the class get bigger and bigger.”

Racing at the GC32 World Championship is scheduled to start tomorrow at 1300 CET. 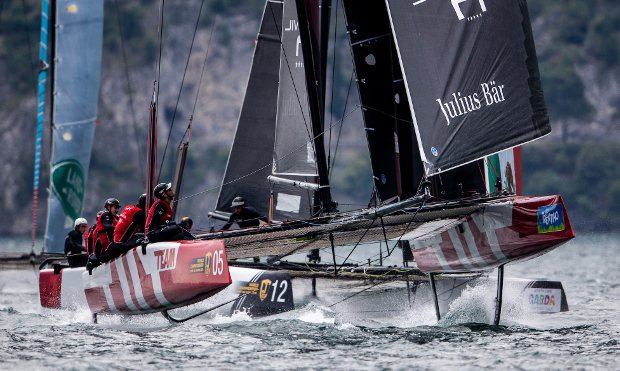