Foiling cat race debut for Bertarelli With the most wind seen at the Marseille Test Event all week, today's stand-out crew was Alinghi. The Swiss team moved up to second overall while its Team Principal and two time America's Cup winner took the helm for three races.

After three days of racing and training on the waters off Marseille at the Test Event for the 2015 Bullitt GC32 Racing Tour, the teams have shown wholescale improvement since many made their foiling catamaran race debuts on Thursday. Racing on this penultimate day was held in a shifty southeasterly, blowing off the land that built at times in the afternoon to 18 knots.

Bertarelli took the helm for three of today’s six races, posting a most respectable 2-1-2. Coming ashore, he was all grins – over 25 years he has raced all manner of catamarans from Extreme 40s and D35s to his 41ft Bol d’Or winner, Le Black, to his 90ft LWL giant in the 33rd America’s Cup, but is highly enthusiastic about the GC32. Today was special as he both made his foiling catamaran race debut, and established a new Alinghi GC32 speed record of 34 knots. 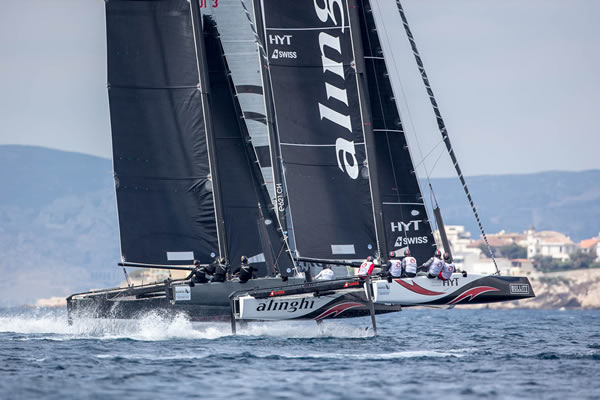 The intense rivalry between Alinghi and his sister Dona Bertarelli’s Spindrift racing team, steered by French catamaran ace Yann Guichard, is already evident on the race course and is certain to become an on-going feature of the Bullitt GC32 Racing Tour.

“It didn’t feel like we were the stand out team,” admitted Morgan Larson, who helmed for the three races in which Bertarelli didn’t. “It feels like there is so much room to grow and obviously the guys did an awesome job and were improving. I guess that is the name of the game, because we are all so new to this.” Despite their success, there were definitely some ‘exciting’ moments today on board, including one near capsize.

Stability of flight seems a key issue. ARMIN STROM Sailing Team – who have been sailing GC32 longest and have the additional benefit of former Luna Rossa helmsman, Chris Draper, on the tiller here – are the masters. Up on foils, they seem to ‘hover’, whereas other greener teams, tend to pitch or ‘porpoise’ more.

Larson agrees that this is where there is most room for improvement: “There are a lot of tricks such as whether you use crew weight to alter the angle of attack [of the main foil] or whether you adjust it or the sails or a combination of everything. Chris Draper and his guys have the most experience so they know how to get the boat flying efficiently, whereas we are all bucking around more.”

Typically today ARMIN STROM Sailing Team was fastest out of the blocks on the America’s Cup-style courses with reaching first and final legs. Sebastien Rogues’ GDF SUEZ team led around the first reaching mark on two occasions, but seemed unable to retain this position.

With the wind the strongest it has been all week, today the GC32s were coming close to foiling upwind – something that these catamarans are only capable of thanks to their large foils.

Overall leader, ARMIN STROM Sailing Team, today claimed two race wins. Helmsman Chris Draper observed that the other teams have been on a steeper learning curve and have improved a lot. “They are all great sailors. I think we have a good edge downwind and on the starts, but the other guys are so used to sailing together as a team and getting their heads out of the boat and looking around, they often made gains on us tactically upwind.”

On two occasions Alinghi passed ARMIN STROM when they were leading, once when Draper’s team went the wrong way and another time when they trawled their genniker.

As to their foiling prowess, Draper advises: “A little a bit is trim. I am trying to get the crew to move the rake [of the main foils] quite a bit. I think the boat would benefit from a power pack and active rake [that the helmsman can control] – that would make an enormous difference. And I am changing the elevators [the rudder T-foils] quite lot for the different legs – the system is good and simple but you can’t move it as much as I’d like to.” Allowing the helmsman to alter the rake of the main foils would allow the GC32 to be sailed much faster Draper believes. “I think the racing would look a lot better and be a lot better if you could move the rake [control] to the helm station for sure.”

Tomorrow is the last day of the Marseille Test Event and with the wind set to build in the afternoon, the schedule has been brought forward and shortened – three races are scheduled starting at 1000.