Four days of furious foiling: Bullitt GC32 Cowes Cup starts tomorrow Stage two of the Bullitt GC32 Racing Tour sets sail on the Solent, off Cowes, Isle of Wight tomorrow with 10-12 knot winds forecast in which the GC32 one-design catamarans will be foiling at speeds approaching three times that of the wind.

Stage two of the Bullitt GC32 Racing Tour sets sail on the Solent, off Cowes, Isle of Wight tomorrow with 10-12 knot winds forecast in which the GC32 one-design catamarans will be foiling at speeds approaching three times that of the wind.

Racing will take place between 1100 and 1600 BST over the next three days (24th-26th June) for the five top international teams completing. These include two time America’s Cup winner Alinghi, with Team Principal Ernesto Bertarelli helming. The Swiss team will be up against Austria Cup winner, the Leigh McMillan-skippered Sultanate of Oman, their old foe from recent Extreme Sailing Series seasons. All the way from the USA is Team ARGO, led by two time Melges 32 World Champion, Jason Carroll, making its debut on the Bullitt GC32 Racing Tour.

GC32 International Class Association President, Flavio Marazzi (below), who also skippers ARMIN STROM Sailing Team, is looking forward to the GC32s’ return to the Solent. “We sailed here two years ago during Cowes Week which was great. There is a lot of history here and also a lot of innovation – that is the reason we originally came here – to show the next step in sail boat racing.” 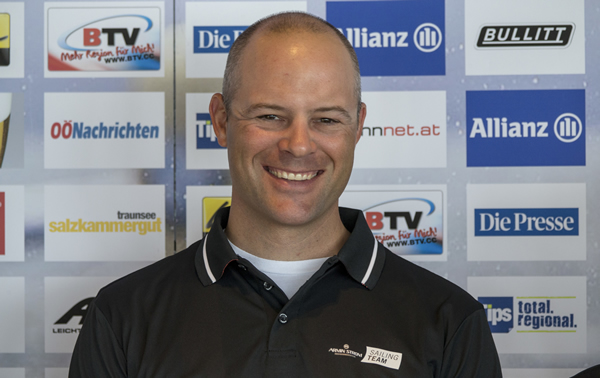 Marazzi observes that the Solent is also presents fresh challenges for the GC32 crews: “In 15 knots it is very interesting to sail here with the tide – in fact it is the only place the Bullitt GC32 Racing Tour will visit this year where there’s tide.”

This is also not the first time Sebastien Rogues, the French skipper of the blue GC32 ENGIE, has competed on the Solent, although last time was on a rather different style of yacht. “The Bullitt GC32 Cowes Cup is a real chance for us to go racing on the GC32 in the heart of modern day sailing. I have some very good memories of Cowes, because I often won races here – above all I won the Rolex Fastnet Race on board my Class40 GDF SUEZ two years ago. It is a mythical sailing area.”

Racing over the next three days is set to take place to the west of Cowes, which will provide enough runway for the GC32s that are capable of speeds approaching 40 knots. The boats will be competing on their normal America’s Cup-style course – windward-leewards, but with reaching starts and finishes. This will be the first occasion in the UK that corporate guests will get to experience racing in anger on board foiling catamarans.

On Saturday (27th June) the GC32s then go on to compete in the JP Morgan Asset Management Round the Island Race, starting their 50 mile anticlockwise lap of the Isle of Wight at 0710 BST (0610 UTC). The Round the Island is famously one of the world’s largest yacht races and this year the GC32s will be competing alongside an entry that at present stands at 1577 yachts in total.

Dave Atkinson, of host yacht club, the Island Sailing Club, commented: “The club is delighted to see the GC32s in Cowes. It is nice to have an international group of sailors with competitive high tech boats here, especially under the auspices of the Island Sailing Club. The GC32s are cutting edge and having been around them for the last days, the technology they use and the skills of everyone involved has been an eye opener.”

Follow the racing via our live blog and the GeoRacing tracking at www.gc32racingtour.com (starting at 1100 BST / 1000 UTC)