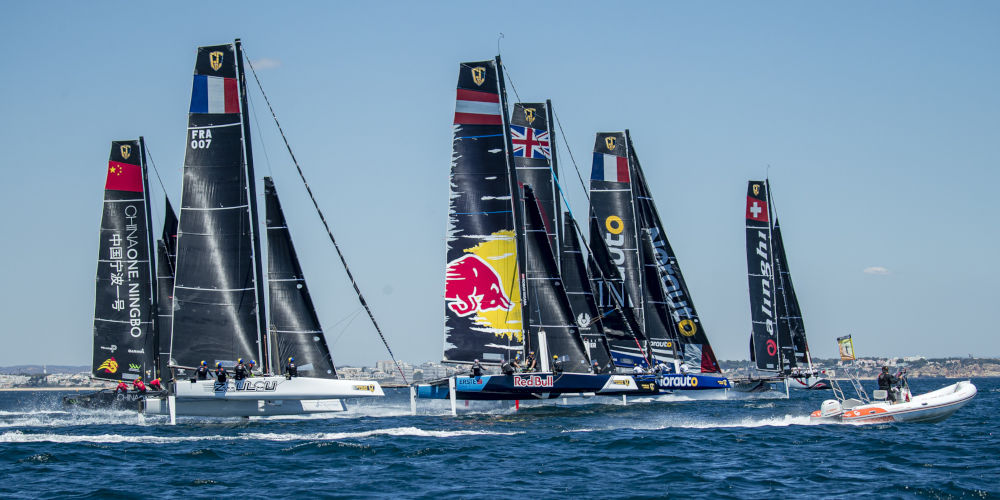 Four leaders within one point after GC32 Worlds’ opening day

For the ten international teams competing off Lagos, Portugal at this second World Championship for the GC32 flying one design catamaran class, a day of two halves plus a mix of conditions and starting formats provided a worthy test that caused even the most polished crews to falter. Nonetheless after five races the top of the leaderboard is impossibly tight with four teams all within one point.

Day one of the GC32 World Championship, taking place with the support of the City of Lagos, Marina de Lagos and Sopromar, started in an uncharacteristic southwesterly, blowing across Lagos’ bay and at times gusting to 16-17 knots. Two races were held in this before the lighter prevailing northwesterly filled in, requiring a new race course to be set up and a change from upwind to reaching starts.

While the top four teams came out close, all had deep results, the most polarised being those of Alinghi, which ended the day second but tied on points with the leader, Oman Air. The Swiss team won the first two races in the more stable conditions, and then race four. Race four was the most complex of the day when separate wind shifts up both sides of the race course created major compression leading to some hair raising, penalty-ridden moments as boats converged with closing speeds of 50+ knots at the leeward gate.

“Today the key was consistency,” said Arnaud Psarofaghis, co-skipper of Alinghi. “We had two bad races but we won three, so we recovered. Everyone is pushing very hard, but the difficult thing is to be aware of traffic – we had a few issues with other boats today which resulted in two penalties. But that is the game – it is a really great event.”

Psarofaghis said that the first two races they had largely won out of the start and from there had led and extended around the race track, on both occasions finishing ahead of Franck Cammas’ NORAUTO, with Oman Air third.

“Race four we were a little lucky at the top mark because we got the inside and then were off,” said Psarofaghis, who preferred the upwind starts, despite the trickier conditions.

Today’s grandes cajones prize went to Ben Ainslie who courageously steered the INEOS Rebels UK GC32 across the bows of the entire starting fleet, without rights on port tack, in the final race. “We wanted to start on port and head off to the right side because that had been paying,” described Ainslie. “Then we looked at the way everyone was stacking up and the wind had gone a bit left and we thought ‘it might open up’ and it did, so we went for it. It was a Boris Johnson ‘do or die’ move and we lucked out!”

Nonetheless comfortably leading on the final run, their race nearly fell apart when a bad furl in a gybe subsequently prevented them using their gennaker. “Fortunately we had enough of a lead and there was enough breeze to two sail it down, but it was still close,” said Ainslie.  As to the one point of separation he observed: “It’s great. If it carries on like that it will be an interesting final day. But that is what we signed up for – good quality racing.”

INEOS Rebels UK ended the day third, but tied on points with their arch-rivals from the 2018 GC32 Racing Tour, Franck Cammas’ NORAUTO.

Skipper of overall leader Oman Air, Adam Minoprio, said he really enjoyed today’s conditions, after a slow opening: “We had a few not-so-great starts – we got into trouble at the pin and had a rough-up with Argo in one. But we managed to pull back with some good laylines, some good moding and tactics up the second beat.”

The Omani team won race three, the first in the northwesterly, which Minoprio attributed to playing some shifts better up the second beat. “The top four teams all had some deep races, because it was so tight. It is a tricky regatta.”

In fifth place and leading the owner-driver championship is Argo, skippered by Jason Carroll. The US team preferred the trickier offshore northwesterly, which showed in their results. “We always enjoy Lagos – it is the perfect place for sailing these boats once the northwesterly picks up,” said Argo’s tactician, Sébastien Col. “The second part of the day was better for us. We probably didn’t know the race course in the southwest breeze. Also we made a couple of not easy starts, but then with the help of our coaches, we regrouped.”