GC32 leader tie as Villasimius turns up the volume Five races were held today at the GC32 Villasimius Cup with Norauto claiming two bullets with other winners being Oman Air, Argo and Alinghi

GC32 leader tie as Villasimius turns up the volume

While windy Thursday was in fact windless, on what the forecasters were predicting would be windless Friday Villasimius switched on its wind machine, allowing the full schedule of five races to be held and tired crew to come ashore into Marina di Villasimius buzzing. At this half way stage of the GC32 Villasimius Cup, the opening event of the 2019 GC32 Racing Tour, two teams are tied at the top, with skippers who were team mates in the last America’s Cup.

After a windless morning the wisdom was that it might remain this way for the entire day. However after 1100 the wind did fill and, after one aborted start, the race team got the first race off at 1230 in a 10-12 knot southeasterly. In this INEOS Rebels UK led for the first lap but were just short of the layline into the leeward gate and a difficult gybe opened the door for Oman Air to overtake. The Omani team maintained its lead around the next lap to claim its first bullet of season.

By the end of race one a cloud line was looming to the east, bringing with it the highest wind speeds of the day. For race two the wind was gusting up to 20 knots and caused one of the most exciting performances in the GC32 Racing Tour’s five year history – the ten flying catamarans converged on the leeward gate with closing speeds of 50 knots.

As Oman Sail’s new skipper Adam Minoprio commented: “That was a great race. We had some nice high speed foiling which we much prefer to using the Code 0 upwind and struggling to foil downwind when its lighter.

“When the breeze is above 15 knots, these boats are just awesome – upwind they track along beautifully, just skimming the water. Then downwind you are off. Today we were doing 25-26 knots – if you go too much faster you are not sailing towards the bottom mark!” 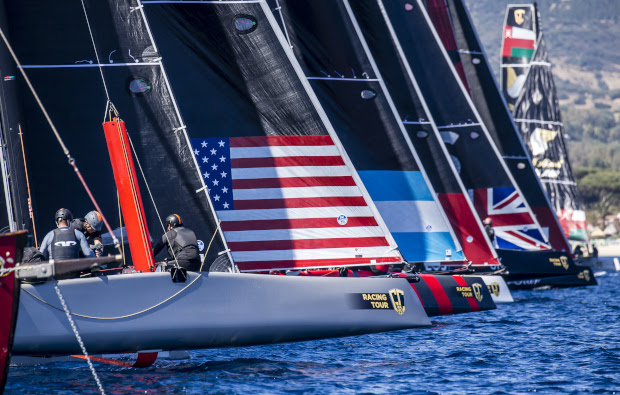 In this it was the Phil Robertson skippered CHINAone NINGBO that led around the top mark and headed off down the left side of the run, while Franck Cammas’ NORAUTO split right. The latter choice paid and the blue GC32 was first to scream into the leeward gate. Behind them the GC32s flying in on different gybes was like an aerobatics display. This didn’t go so well for Zoulou and Red Bull Sailing Team that while attempting to avoid a collision, caused them to clash rigs, loping the masthead wind instruments off Red Bull. For this the on-the-water umpires awarded Zoulou a two point penalty.

Cammas and NORAUTO went on to win both this race and the next in which the Volvo Ocean Race winning skipper led from the first leg on.

For race four, it was the turn of not only a new team but an owner-driver to claim a bullet. American Jason Carroll’s Argo knows the way around the race track here having won the first GC32 Villasimius Cup in 2017. As their man mountain trimmer Scott ‘Chuck’ Norris described it: “We had a good start up near the committee boat and were able to maintain our lane pretty much all the way out to the left and it came together for us. Our boat speed was key to that. We have got a new group on the boat so we are slowly working through the mechanics of who’s doing what. But winning that race was fantastic.” In addition Argo is racing a charter boat here, their boat having been held up in shipping.

Ernesto Bertarelli’s Alinghi had an up and down day. They suffered a stuck gennaker halyard in race two that required the nimble João Cabeçadas to shimmy up the mast to release before the next race. However from there the Swiss team excelled, posting a 2-2-1 leaving them four overall and leading the owner-driver championship from Argo at this half way stage. “Thank you everyone for waiting or us – that put us back in the game,” said mainsheet trimmer Arnaud Psarofaghis of their repair job. “Our 2-2-1 was a nice to end the day.”

In the lively conditions the Swiss team was not alone in experiencing gear failure. CHINAone NINGBO  broke the gennaker sheet on their chartered boat in race four forcing them to retire. “We don’t have the newest gear and we are quite an unexperienced crew, but the guys did bloody well and got the job done,” said skipper Phil Robertson. “We put in pretty good starts but we had a few bad gybes and lost places.”

Overall after day two of the GC32 Villasimius Cup Oman Air and NORAUTO are tied on 19 points with Oman Air ahead on tie break having had a better result in today’s last race. Their leading may be down to some rivalry – Oman Air’s skipper Adam Minoprio was training partner for Cammas in the build-up to the last America’s Cup.

In a further attempt to make up the schedule, tomorrow the first warning signal will be at 1130.