Simon Delzoppo: the GC32 Racing Tour as an owner-driver Travelling to compete on the GC32 Racing Tour from the other side of the world is challenging at the best of times, but when the pandemic stuck and draconian travel restrictions were introduced it was a step too far for owners and crew coming from especially New Zealand and Australia. Fingers crossed, those days are […] 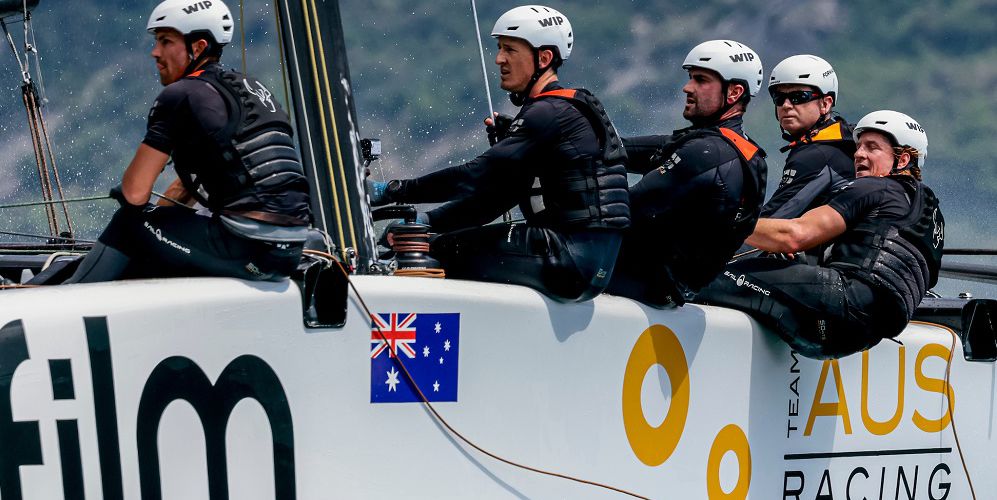 Simon Delzoppo: the GC32 Racing Tour as an owner-driver

Travelling to compete on the GC32 Racing Tour from the other side of the world is challenging at the best of times, but when the pandemic stuck and draconian travel restrictions were introduced it was a step too far for owners and crew coming from especially New Zealand and Australia.

Fingers crossed, those days are behind us and this has enabled Aussie skipper Simon Delzoppo and his .film AUS Racing team to return to the circuit for the first time since 2018. He has competed in the first two events this season and will be on the start line of this week’s GC32 World Championship.

Aside from swelling the GC32 Racing Tour’s owner-driver sub-class, Delzoppo is also President of the World Sailing-recognised GC32 Class Association. So how has the GC32 Racing Tour changed during his three year absence? “It has strengthened. We have a good number now and a good mix of America’s Cup and SailGP teams and owner-drivers teams.  Some of the owner-drivers have been with us for years now. Everyone enjoys the competition among the different teams, but especially the owner-drivers who have the opportunity to compete against some of the professional teams and who have performed very well – surprisingly well in fact. So it is still a good mix and we are in good shape for moving forwards.” 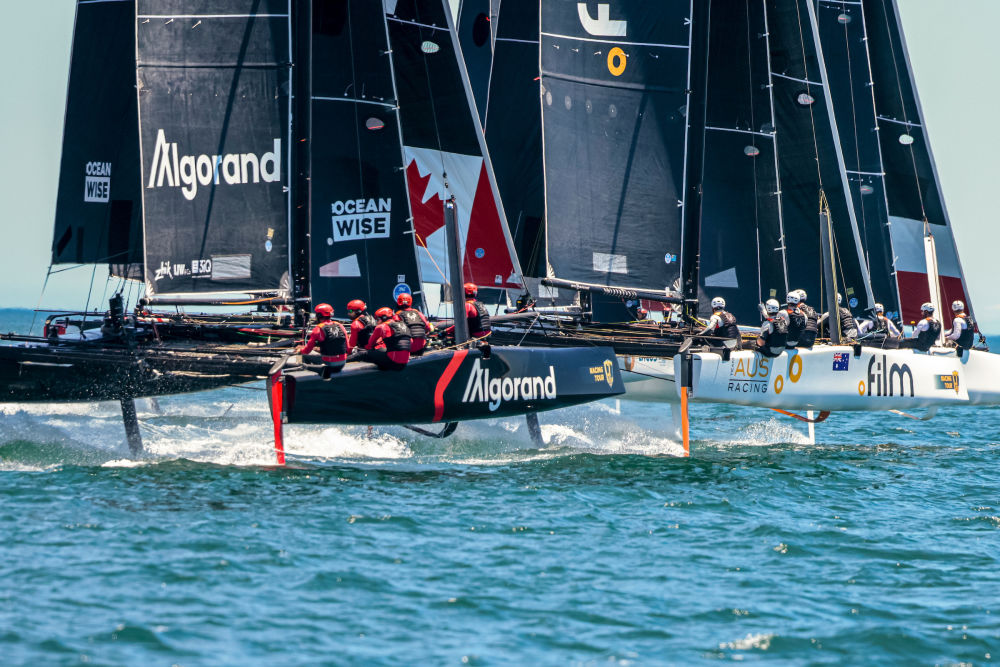 Once upon a time the World Match Racing Tour was the circuit America’s Cup teams used to sharpen their match racing skills. With Cup boats now foiling, these teams are now turning to the GC32 Racing Tour. But the circuit now also provides the unique opportunity to for owner-drivers to compete against these most elite of teams in our sport. As Delzoppo observes: “Where else in sailing can you do that? It is a great feeling when you are out on the course there with them and to race together. There’s no doubt it is a high level of competition and you have to do everything right. I love it because you have to rise to the competition and that makes you better. Everyone enjoys pushing themselves to new boundaries – that’s a great thing.”

Designed by Dr Martin Fischer, now Chief Designer for the INEOS Britannia America’s Cup challenger, the GC32 was first launched at the end of 2012 but only became a fully flying boat after it was fitted with Mk2 foils for the 2014 season. Considering it was the first production one design foiling catamaran ‘yacht’ fairly early on in the development of this technology, it is remarkable that almost 10 years on the GC32 remains as popular as ever.

“The GC32 has endured for  10 years because it is a great design,” states Delzoppo. “It is the sort of boat you can jump on and can sail fast immediately. It was well ahead of it time when it was designed – it is a solid design. A good number of boats are still sailing and we are still attracting professional teams that are also sailing more hi-tech boats. They like sailing on the GC32 because it is more of a ‘classic’ foiling catamaran: It’s got soft sails, ropes and pulleys – it is a good old fashioned hard work and the sailors love that. It says a lot about the boat.”

It is also fairly low hassle, says Delzoppo. “Once you’ve put together a good team and have got it up to speed, you can train for a lot of days in a row with the minimum amount of maintenance compared to some of the other more complex boats around.” 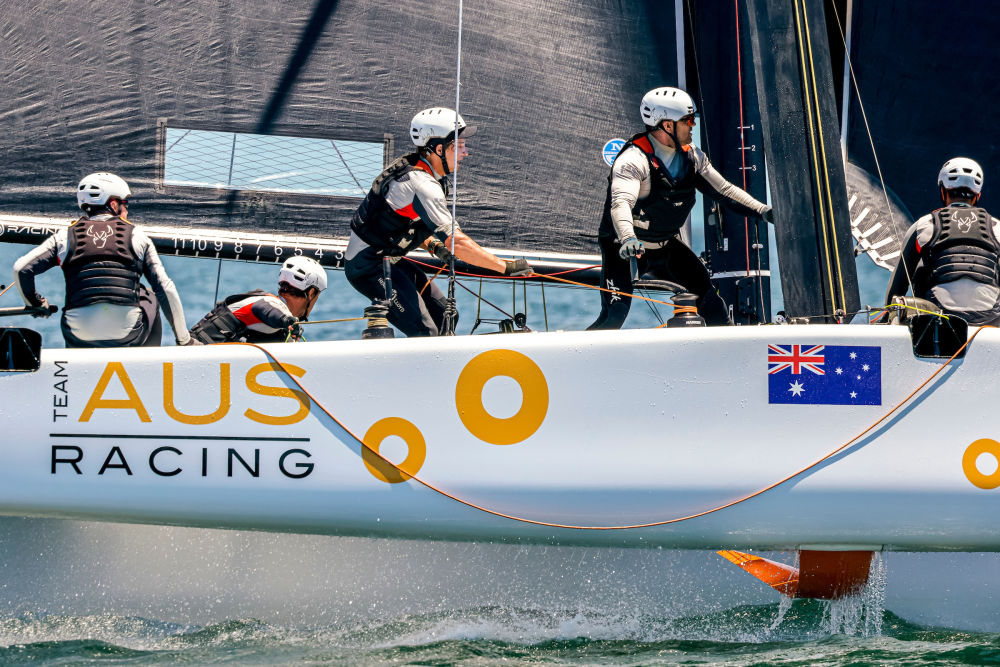 While owner-drivers successfully race the GC32, typically they are not novices. Prior to joining the class, Delzoppo was an experienced dinghy cat sailor having raced Nacras and F18 catamarans for many years. He also used to race offshore with Finnish Whitbread Round the World Race legend Ludde Ingvall on board his Nicorette maxi. Others, such as Jason Carroll, came from the Melges 32 class while Zoulou’s Erik Maris sailed the Extreme 40 and in numerous top monohull one design classes before settling for the last seven years on the GC32. Latest owner-driver HRM Racing Team’s Piotr Harasimowicz also raced keelboats, including maxis and was a successful match racer.

“My passion has always been one design classes and fast catamarans, which is why I’m here,” recounts Delzoppo. “I had been watching the Extreme Sailing Series for years and I thought it was fantastic seeing the guys racing in different places around the world on those big 40ft cats. Then the GC32 replaced that and they began foiling… then it was something that I just really wanted to do, so I just did it: I decided to buy a boat and go out and compete against some of the world’s best sailors. It was quite a challenge, but I’m enjoying it.”

So how much skill do you actually need to be a GC32 owner-driver? “It certainly helps coming from a catamaran class,” says Delzoppo. “Then there are really two parts to this: Having a good amount of experience [ie having raced at at least national level, if not an international] and confidence you can step up to this level if you have the right support team around you – so, get some experienced crew who have been in the GC32 before. Then get your boat in good shape, do some training and be prepared to slowly develop, as it is not going to happen overnight.”

Entering such a class can be quite daunting for an owner-driver but also ultimately highly rewarding. “The first year we would occasionally have a good result, but we were at the back of the fleet a lot. You can’t expect to step on board and just win all the time, but you will get there. It is surprising – the penny drops and you are out there at the front. Then it starts to feel pretty good!”

While the owner-drivers are all amateurs, their crew are all professionals. For example on board .film AUS Racing with Delzoppo are old GC32 hands Ed Powys, James Wierzbowski, Emirates Team New Zealand grinder Guy Endean and Rhys Mara, who won the GC32 World Championship last year with Red Bull Sailing Team.  Powys, Wierzbowski and Mara all sailed with Tom Slingsby on the Australian F50 when they won the Plymouth SailGP event last year.

“You have to throw yourself in…” continues Delzoppo. “We don’t get an opportunity to train in Australia as there are no other GC32s there. So it is sometimes hard because I am doing a lot of travelling and often we turn up these events we have the minimum amount of training and have to perform. It is a challenge, but it can be done.”

So what is it actually like steering a GC32 in anger around the race course? “The feeling is like nothing else,” says Delzoppo. “You are blasting along. It’s pretty exciting, but it takes a lot of concentration, keeping an eye on the other teams. There is a lot of close sailing – especially the reaching starts into the first turning mark when you have boats both sides of you going along at 25-30 knots. It is pretty crazy at times, but it is great fun too.”

And of course you are alongside America’s Cup and SailGP teams including many heroes of the sport. “It feels good when you beat them because they are some of the world’s very best. You can learn a lot from them – I watch how they start and sail their boats and learn all their tricks. The learning curve is just amazing, it is a good feeling.”

Some sailing classes are so competitive that the teams are insular and there is little ‘fun’. The GC32 Racing Tour however “has a good vibe. We all know each other quite well now. Don’t get me wrong – on the race course it is quite cut throat, but when you get back to the dock it is all friendly. We all support each other if any of us need parts or something done to your boat – we help each other out. It is about getting boats out on the race course and making sure they are all going well and that we don’t have any delays.

“It is good socially – we get together and have drinks afterwards and we are all in the park putting our boats together.”

So when will there be a GC32 Racing Tour event in Australia? “I’d love to have a GC32 event in Australia. I tried a few years ago as we have a number of great venues we could race at. But people would need to be up for travelling…!” 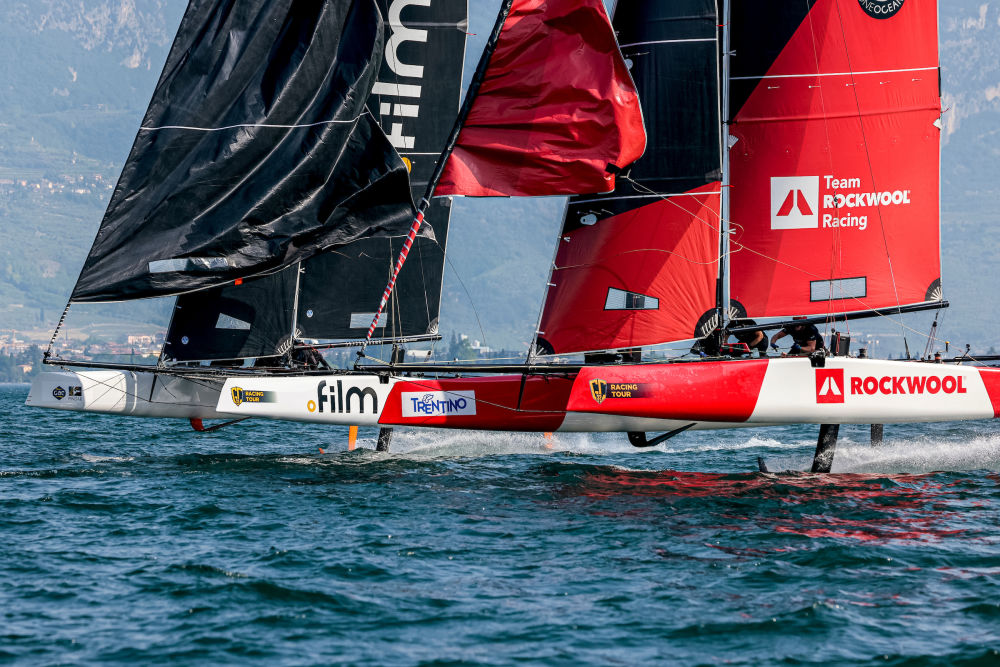