GC32s return to Italian sailing mecca Seven teams are set to contest the GC32 Riva Cup, once again being held of the magnificent venue that is Riva del Garda, with four days of top conditions forecast

The GC32 Racing Tour resumes tomorrow in what is regarded as the benchmark venue for flying catamaran competition – Riva del Garda at the northern end of Italy’s Lake Garda. Racing runs out of the Fraglia Vela Riva from Thursday to Sunday, with a scheduled start time of 1300 each day.

Seven teams will be on the start line of the GC32 Riva Cup. The heavyweight bout at the top of the leaderboard will be between the Adam Minoprio-skippered Oman Air and Ernesto Bertarelli’s Alinghi, helmed this week by Swiss ace Arnaud Psarofaghis.

While one of these two teams is likely to take the overall 2019 GC32 Racing Tour title when racing concludes in Muscat, Oman in November, the fight remains fully on for third. At present holding this position are Austrian Olympic Tornado double gold medallists Roman Hagara and Hans-Peter Steinacher and their Red Bull Sailing Team.

“We know Lake Garda from our Olympic sailing and even before that,” admits Hagara. He and the Red Bull Sailing Team have competed here previously in their GC32 but Hagara observes that was with a different crew. He is hoping that Lake Garda’s famous combination of stiff breeze and flat water will be evident this week. “We saw in Palma that in strong breeze we were doing well, so hopefully we will get that.” Meanwhile he is enjoying the proximity to his native Austria that enables his sponsors the opportunity to bring many guests to Riva del Garda to take advantage of the GC32 Racing Tour’s corporate entertainment opportunities.

American Jason Carroll’s Argo team return to the GC32 Racing Tour having missed out on Copa del Rey MAPFRE, occupied claiming line honours in the Transpac race from Los Angeles to Hawaii. Carroll is pleased to be back on picture postcard pretty mountain-encircled lake. “Riva del Garda is the constant every year for the class. We come here and have a great regatta. I am always excited – it is beautiful and always delivers a high chance of good 10-15 knot breeze and flat water which is nice.” 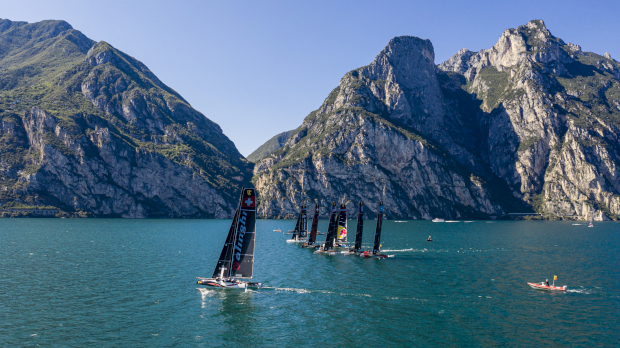 For this event Argo has lost Nick Hutton to America’s Cup duties with French catamaran veteran Hervé Cunningham replacing him. With tactician Seb Col, two fifths of the Argo crew is now French.

There is also a crew change for this event on Christian Zuerrer’s Black Star Sailing Team with leading Kiwi match racer Will Tiller joining the crew, in addition to Australian Keith Swinton who took over the helm of the Swiss team in Palma last month.

Black Star Sailing Team is new to the GC32 Racing Tour this season but they are gaining confidence in manoeuvres and getting more into the fine-tuning stage. Zuerrer is impressed with Riva del Garda: “It is an absolutely great venue – last week it was cold and rainy, but there were still good wind conditions. We are looking forward to perfect conditions and having a good regatta here. Hopefully we can play with the big guys again like we did in Lagos.”

Ever consistent is Erik Maris’ Zoulou team, current leaders in the 2019 GC32 Racing Tour’s owner-driver championship ahead of Argo. “Riva del Garda is one of our favourite venues,” says mainsheet trimmer Thierry Fouchier. “The locals are very welcoming and it is a huge place for sailing, which is nice. They know how to hold races and also the weather conditions are always great with sea breeze in the afternoon and with the mountains around the lake, the view is amazing. It is a great venue.”

Typically Lake Garda is where some of the GC32’s highest peak speeds of around 40 knots have been recorded. This time around the crews have yet to see this in training, but Fouchier is hopeful. “If we can get 15-18 knots we can do 35 knots.”

In the overall 2019 GC32 Racing Tour Zoulou has Red Bull and the bottom rung of the podium in their sights. “There is no secret – it is firstly about good starts and good manoeuvres and then going fast and making less mistakes than the others,” continues Fouchier.