Jason and the Argonauts seize the early advantage in Sardinia Four different winners in four races on a stunning day in Villasimius. Jason Carroll was top dog with all scores inside the top three....

Jason and the Argonauts seize the early advantage in Sardinia

Jason Carroll expertly steered his Argonauts to an early lead at the GC32 Villasimius Cup in Southern Sardinia today. The second stage of the 2017 GC32 Racing Tour got underway with four races in breeze ranging from 10 to 20 knots on flat water, and Team Argo from the USA won the second race and always finished in the top three.

“We liked the committee boat end of the start line,” said Carroll, who also leads the standings for the Owner Drivers division. “As always starting was a key moment because you have the best of the choices on the race course for the rest of the race.” 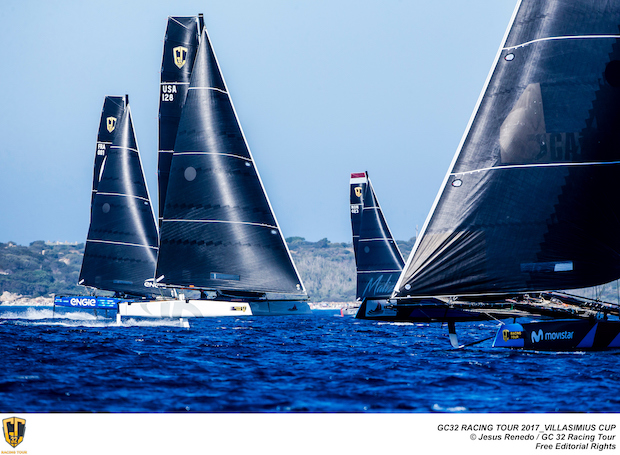 There were a lot of smiles after racing this afternoon. The principal race officer Stuart Childerley had called for an early start at 10am this morning, for fear of the wind and the wave state building up too much for the high-flying, fast-foiling GC32s. As he motored out of the Marina di Villasimius, Childerley was alarmed at the waves rolling into the bay, but he pressed on with his plan to motor round Capo Carbonara and was delighted to find much flatter water in the eastern bay on the other side of the Cape and looking back on to the beautiful beach of the Valtur Tanka resort. It wasn’t just sailable, it was pretty much spot on for GC32 racing.

Iker Martinez was looking to make amends for a disappointing showing at the GC32 Riva Cup at Lake Garda a month ago. The Spanish double Olympic medallist was fast out of the blocks and steered Movistar-Ventana Group to an early lead and won race one. The rest of the day was a good one for the Spanish crew and Martinez said the difference was having his tactician back on board, Guatemalan Olympic representative Juan Ignacio Maegli. “This was my first race since last year’s Olympics,” smiled Maegli. “It’s a nice way to come back to racing again.” 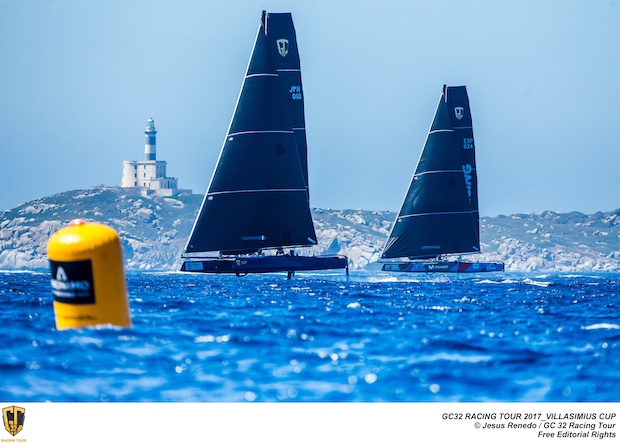 The two other race winners today were Jérôme Clerc’s Realteam, winner of the previous event in Riva, and Mamma Aiuto! skippered by Naofumi Kamei, another Owner Driver who was outperforming the pros today. French crewman on the Japanese boat, Hervé Cunningham, couldn’t quite believe the sailing conditions in Villasimius. “Just beautiful sailing today, the water is so blue, you can see the fish, we’re surrounded by the mountains, the beaches. It was just magical.” Cunningham and his fellow crew weren’t just looking around at the scenery though, they also raced very effectively and sit in third overall, tied for points with the Spanish in second.

Team Engie sailed a consistent day in the middle of the pack, but it was a struggle for Malizia – Yacht Club de Monaco and Armin Strom. Flavio Marazzi’s crew were the only team to opt for the smaller jib in anticipation of the strong wind arriving, but it never kicked in as much as the forecast had suggested and the Swiss crew struggled to make an impact today.

Friday’s forecast looks very fluky with the wind looking like it could come from any direction. From 4pm onwards a stronger northerly breeze is expected to arrive, but it’s certainly going to be a different challenge from today’s steadier south-westerly wind. 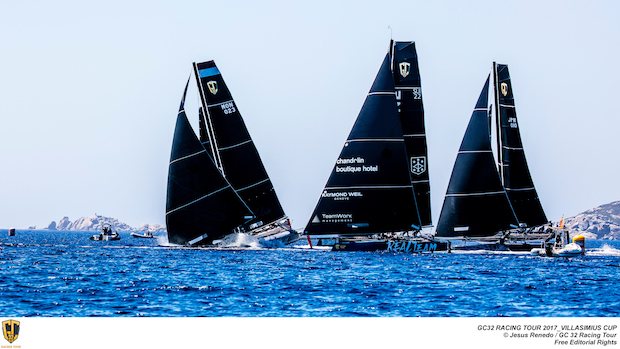